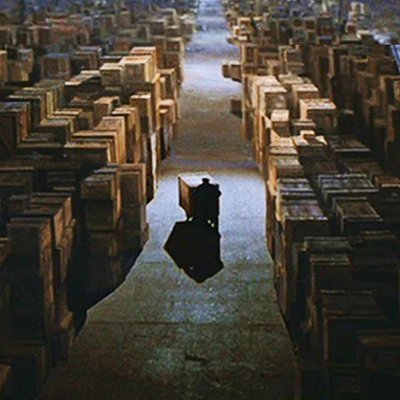 If I'm not mistaken, the next speaker at the QAnon conference will be Michael Flynn.

They're running a clip showing Flynn's "Digital Soldiers" speech, and -- yep, it's gonna be him.

There's a LOT to unpack in this image. I urge you to ignore the "hed iz pastede on yay"-level Photoshop and soak in the surroundings, like the... 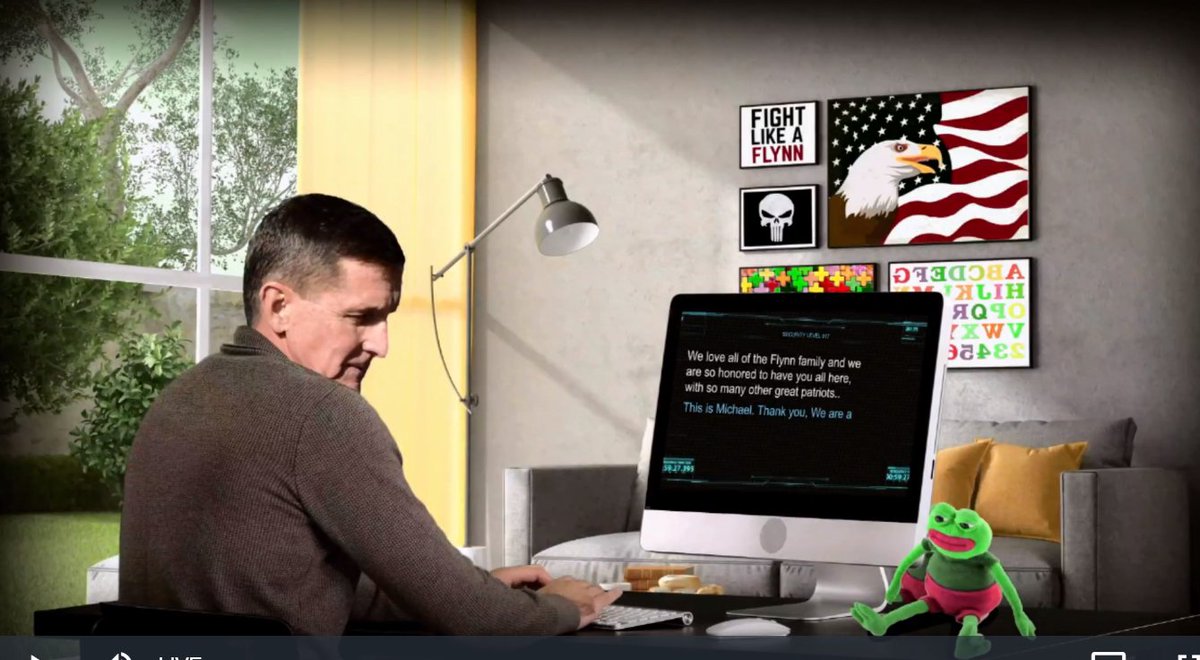 We have transitioned to a music video.

I think this is the "We're Not Gonna Take It" video Q linked to in the last drop. (Except for the possible new drop today, which is a whole thing I'm not going into ITT. @pinealdecalcify is working on gathering reactions; follow her!)

I have to say, "We're Not Gonna Take It" is a pretty good song!

Shame that absolute fucking fascist scum have adopted it as their anthem for a coup against democracy.

OK, video's over. Flynn is on stage, thanking QAnon John for organizing the event. (Also John's wife Amy, I suppose.)

Flynn is clutching a baseball bat for some godforsaken reason, and says several will be auctioned off tonight, also that Sidney Powell has one.

Now he's praising an earlier speaker, and he sounds actually fired-up about that guy. This is a big improvement in Flynn's general enthusiasm level.

The last time I heard Flynn at a QAnon event, he couldn't be bothered to even PRETEND he cared about the hosts or form a rapport with them. 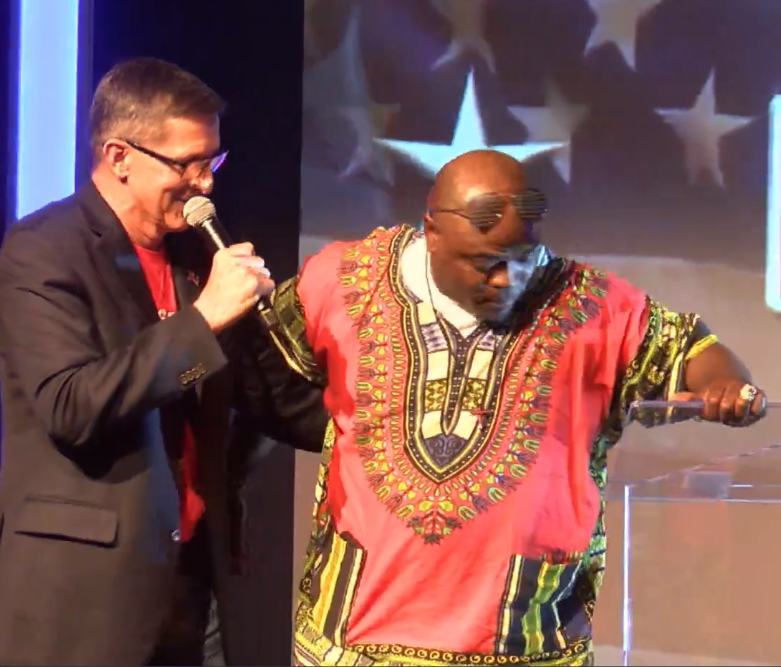 Now he's talking about the origins of Memorial Day, going on about the Civil War. Boooo-ring.

And look, I went through a Civil War buff phase. But this isn't what anyone came here to hear Flynn discuss.

Now he's on the modern-day military, and is just listing military operational specialties for a bit, which, OK. Sure.

Flynn: "Some of them don't realize... they are signing their very life sentence. They'll give their life for people they'll never meet, they'll never get to know... and they'll do it for people, politicians primarily, which is our system, but politicians they don't care about."

Flynn is FINALLY throwing red meat to the audience: he says that "there are media here, media in this audience, who are fake news. Really fake news... let the media spew the hatred they spew, as" (the last, very bad speaker) "was trying to explain to everyone."

REMINDER: this is the headline the Dallas Morning News wrote about the conference https://t.co/1oNiVWiGFm

Michael Flynn is full of shit, is what I'm getting at.

But actual truth isn't important in this context. *Spiritual* truth -- that Flynn's audience is innocent and oppressed, opposed at every turn by a demonic media establishment -- is more important.

Aaand he wanders back away from the red meat and is talking about the origins of the phrase "Gold Star family," which means a family who's lost a servicemember who was killed in action.

Now he's wrapping back around to more audience-appropriate stuff:

"When people come up to me and say they're sorry" for the way Flynn was treated by the DOJ (he never served a second of prison time, btw), he says, "Don't feel sorry for me. Feel sorry for our country, that it's in this state of disrepair."

Flynn calls for a round of applause for the military. It's surprisingly muted.

Now we get, I hope, to the meat of the speech. "OK," says Flynn, "I'd like to talk about our country and the constitution.... This is an unprecedented time."

Michael Flynn at the QAnon conference: "You heard Sidney Powell talking about the what-ifs... this is not a normal time. For those in the media, I will call you out... this is not a conspiracy theory."

PROBLEM: Powell admitted, during the Q&A, that there *is* no QAnon-style Plan https://t.co/pnx3i6QoBu

"Trump won... he won the popular vote and the electoral vote." There's the Big Lie, folks.

I've talked elsethread about what's wrong with the "audit," namely that it's run by fervent believers in the Big Lie for the purpose of building *support* for the Big Lie.

@KaleighRogers was correct to call it a "partisan inquisition."

Flynn says that Democrats, who in his view "outmaneuvered" Republicans to steal the election, "don't believe in these things right here: God and Country."

Now Flynn claims there's a Congressman who says the Pledge of Allegiance "means you're a Trump supporter." https://t.co/2dUnvaGnYr

I do an ADEQUATE job keeping track of what bullshit the right-wing infosphere is mad about, but I'm completely mystified by that one. Does anyone know what the hell he's talking about????

Flynn is now acting as though he's read primary-source documents where the Founders argue back and forth, and write letters and essays, and diary entries, etc etc etc.

I've used https://t.co/g7vzooyj7W many times; it's great and everyone should go there.

I'm a particularly big fan of John Quincy Adams' college diary, but that's neither here nor there. It's just great.

So, Flynn claims that "80%" of their discussion was "about the Bible" and also says something I can't quite hear about the Magna Carta.

That is false. That is BS.

This is standard Christian nationalist stuff. Calls America a "shining city on a hill."

Flynn is back to claiming that he loves legal immigration. "Why do so many people around the world line up at American embassies trying to get in here legally?"

Ah, shit, I had a bad link upthread. HERE is the correct link to Founders Online.

Anyway, Flynn has twice dwelt on his support for legal immigration.

The Trump administration cut legal immigration down to damn-near zero, and famously put the immigration bureaucracy into the hands of racist, nativist, anti-immigration hardliners.

That wasn't a secret.

Michael Flynn at the QAnon conference: this is an information war.

"What does that have to do with information warfare?" he asks.

Michael Flynn at the QAnon conference: we have been kicked off of social media. I have, too.

"We are fighting for an information beachhead. It's not just 1500 or so people who are in this room. It's hundreds of millions around the world who love freedom."

Flynn: I met some people from Eastern Europe here. I met a couple from Korea. (South Korea, one hopes, although North Korea has a unique place in QAnon lore.)

For more on North Korea in the QAnon imagination:

If you wanna skip that thread, which is fair, it boils down to: the CIA used to run North Korea, but Trump and the Q team freed it, and Kim Jong Un is a good guy actually because he's very grateful to Trump.

Anyway, Flynn is now whining that he was "persecuted."

Flynn: "The one thing more important than freedom is faith. Is our faith in God. That's right."

He pauses. There is EXTREMELY tepid applause. I don't know why! That IS an applause line for this crowd. What's up???

Honest suggestion: maybe almost everyone is recording this with one hand on their phone, so they CAN'T clap?

Flynn: "Local action has a national impact." This has been a theme for QAnon influencers and now for both of QAnon's biggest heroes who've spoken at this conference: followers should get involved in local politics.

Michael Flynn at the QAnon conference: "Get involved in your school boards... these are the things that'll get us back to where we need to be."

Flynn: "We could have an entire conference just about China, how China has been infecting this country for decades."

The potential for QAnon to take a sharply anti-Asian turn is there and very strong. Right now, antisemitism is a more pressing concern because of GhostEzra, but 😬

Michael Flynn: "On a given day, a precinct volunteer can have as much power as the President of the United States."

Michael Flynn at the QAnon conference: "Get involved in your school boards. Get involved. Go. Don't let these Democratic socialists who are running our schools" (maybe he said ruining? Unclear) "-- don't let them get away with that."

Now he's on to anti-mask rhetoric.

Flynn is talking about a 6-year-old who had some kind of facial rash, which was definitely for sure caused by wearing a mask.

Flynn: "I used to counsel officers, noncoms... I would ask what do you think your potential is?... I got interesting answers."

The gist of this is that Flynn wants people to take *risks* to attain *greatness*, to max out their potential.

Flynn: "We cannot take that attitude anymore. You have to start assuming risk.... You have to decide how are you gonna get involved?"

"Thank God that in this document," meaning the Constitution, "they gave us states' rights."

Sounds like the speech is winding down now. He's praising his wife and says this is the last part of the talk.

Mike Flynn at the QAnon conference: "I was on the ABHT team: the Anybody But Hillary Team....

I got into politics only because I faced evil inside our country... in the latter [part] of my time in the military."

BUT to the audience...

To the audience, I bet you a thousand bucks this will sound like a Pizzagate reference.

That is an incredible quote. Fuck it, it deserves its own whole entire tweet.

Flynn to the people attending a conference that was organized by "QAnon John":

"You say to yourself: God, how can this happen?" I do, Michael. I DO say this often.

"But it was part of a plan. Wake up, America. We're about to lose this thing."

Flynn: "My entire family's legacy is all about military service."

It WAS, but last December you tried to convince Trump to declare martial law and stay in office despite losing the election.

That's the Flynn family brand now, and always will be. You disgraced it.

Flynn closes by comparing his audience -- again, AT THE QANON CONVENTION --

At least, I hope he's closing. But he does still seem to be talking, somehow. "Everybody goes through a tough time," he says, and this is mine.

He needs a hype man in the audience or something.

UPDATE TO THE THREAD:

Right below this, I originally said that Flynn had admitted that Sidney Powell took claims from social media and plugged them into the bullshit election lawsuits.

On a 2nd listen, it sounds like Flynn was talking about his criminal appeals, not the Kraken

So I deleted the tweets in which I mentioned that, because -- unlike Flynn himself -- I have an actual functioning moral compass, and don't spread lies on purpose.