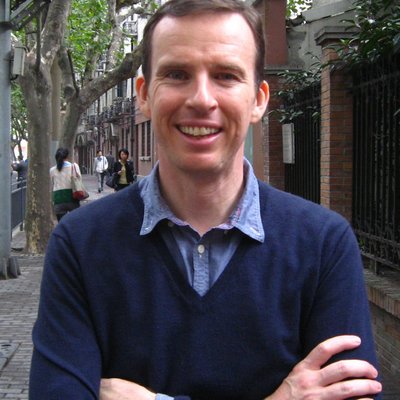 This is a great piece by @JNBPage on the questions surrounding the possibility of a lab-leak, and his attempt to get to the Tongguan mine – a location at the centre of the whole controversy.
1/
https://t.co/oj753borcZ

His story reminded me of the attempt back in October last year - by me, @ProducerKathy and others - following which I always thought a twitter thread might be a good way of providing a few details that didn’t make it into the final piece.
2/
https://t.co/d1cS6jHayr

So, better late than never, here goes.
On our first attempt to reach the mine, we drove south west from the city of Kunming, followed constantly for hours by as many as half a dozen unmarked cars.
3/ https://t.co/cvAp0VKWAG 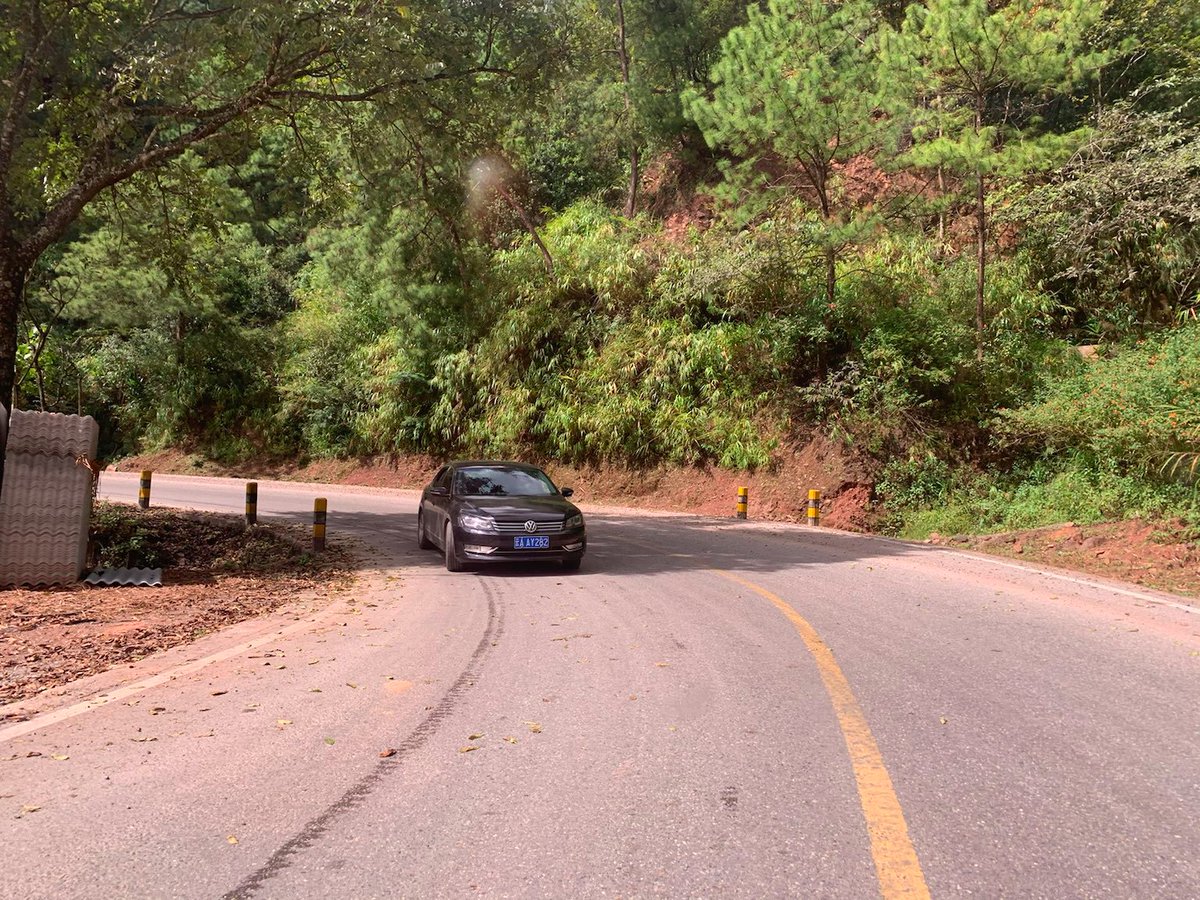 This was our target – the mine where 3 men died of a mystery illness in 2012 and in which the closest known virus to Sars-Cov-2 was found by researchers from the Wuhan Institute of Virology a year later. It's in a remote part of Yunnan Province, accessible via unpaved roads.
4/ https://t.co/Y3xAJDTZG4 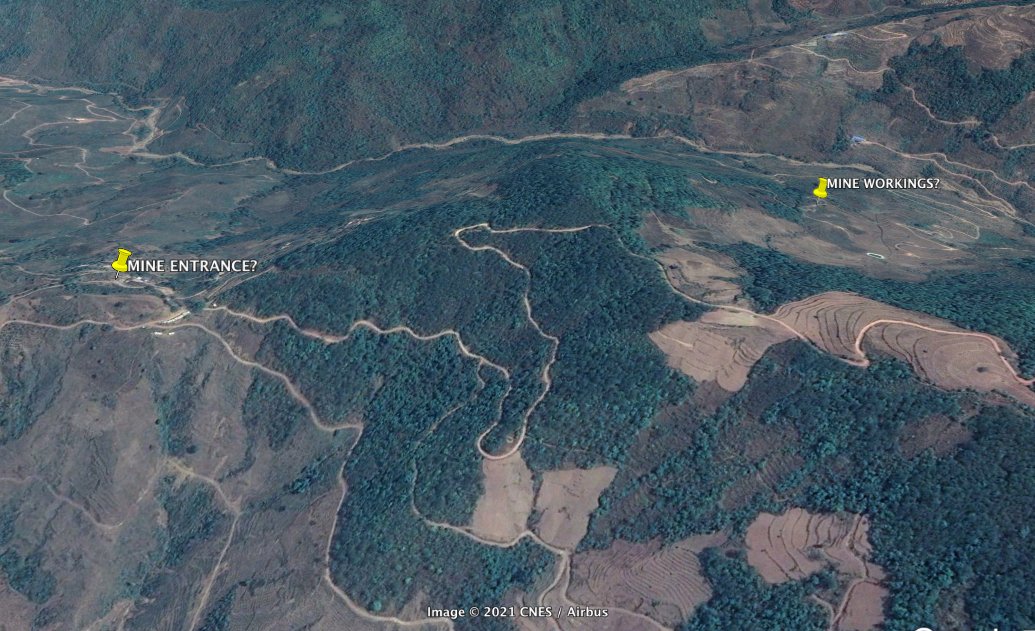 Credit to the team of internet researchers, known as #DRASTIC , for being the first to unearth the coordinates from Chinese research papers for this group of buildings…
5/ https://t.co/DJK7ZD2AdN 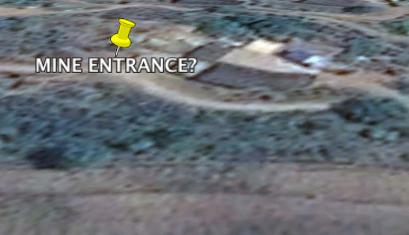 …and for spotting these structures, possibly ventilation shafts? on the other side of the nearby hill.
6/ https://t.co/MXrHzlSDHm 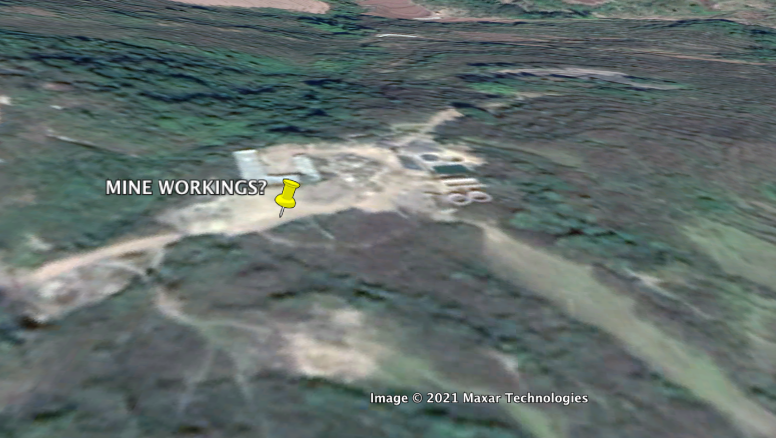 Uncertain on the best strategy, given the constant monitoring and tailing, we arrived late. We ditched the car and tried to walk to the spot marked as a possible entrance to the mine.
7/ https://t.co/IEY4jGgvZ0 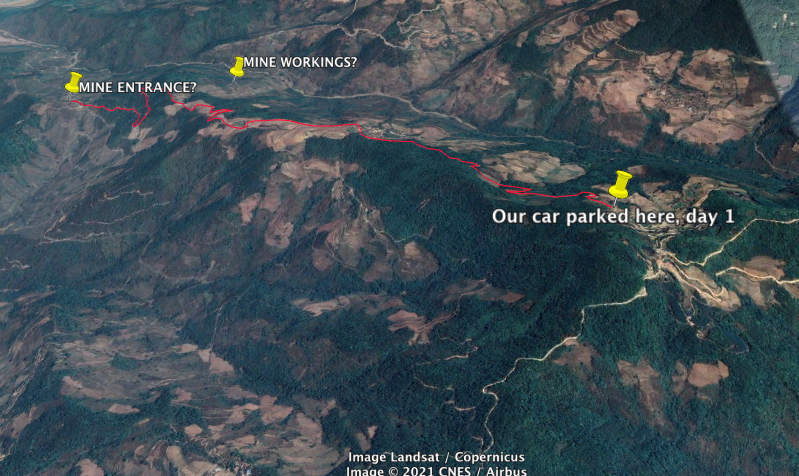 It was a long hike on rough ground. When we reached the tiny village of Danaoshan, we were being watched. One man we met on the path, clearly keeping an eye on us, refused to speak.
8/

By the time we got to the coordinates for the mine entrance, it was pitch black.. far too dark to film. We’d no choice but to retreat and try again the next day.. encouraged to have at least made it this far.
9/

But the authorities were more than ready for us. We first tried to drive in from the North, but were stopped here:
10/ https://t.co/8N70UajulH 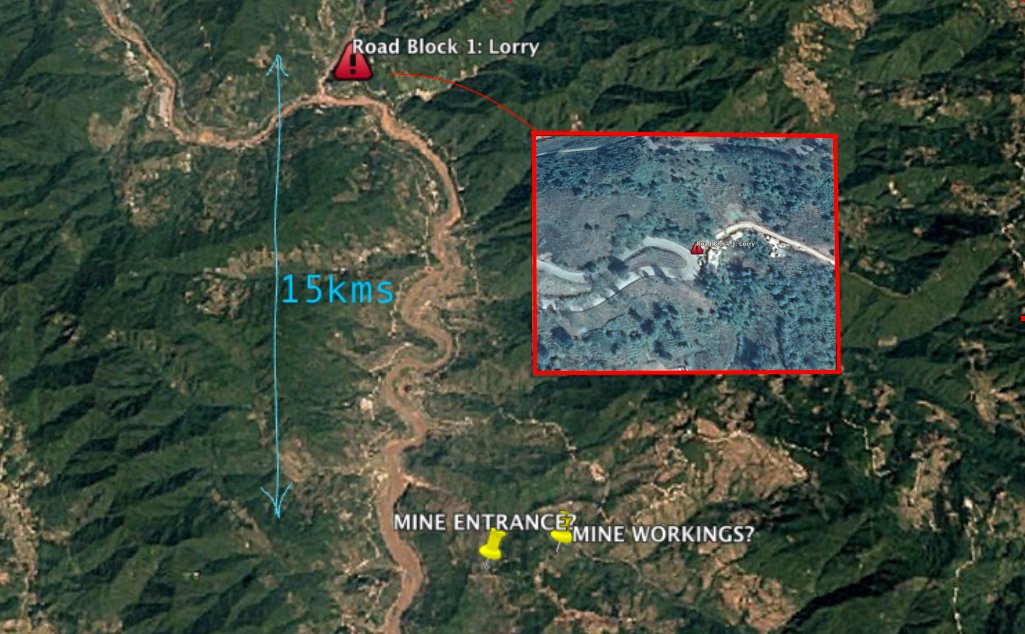 … with a lorry - which you can see in the background here - blocking the road
11/ https://t.co/u2rsqjSzIq 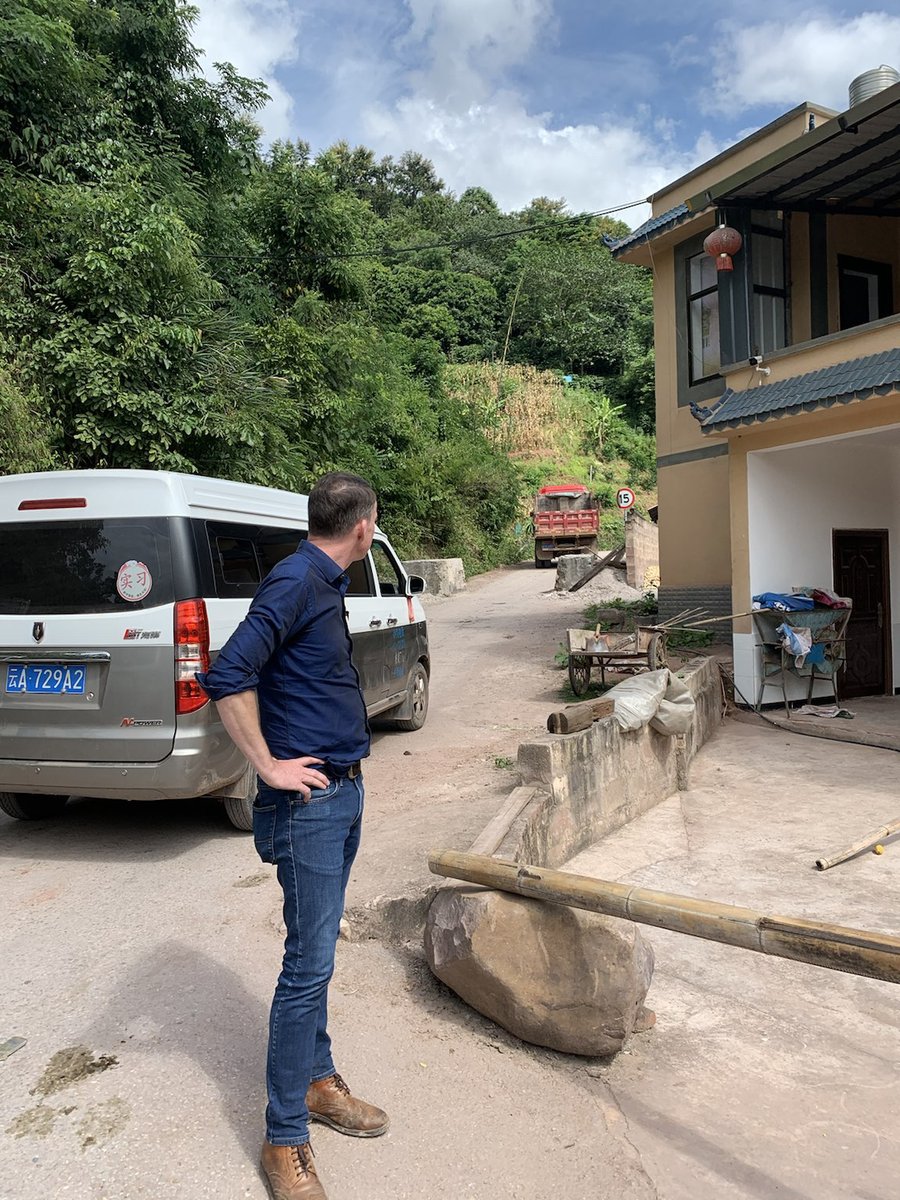 To the annoyance of the plain clothes police following us, we managed to squeeze our car, Houdini-like and with just millimeters to spare, down the gap to the right of the lorry, alongside the small building.
12/ https://t.co/ors8dvu51w 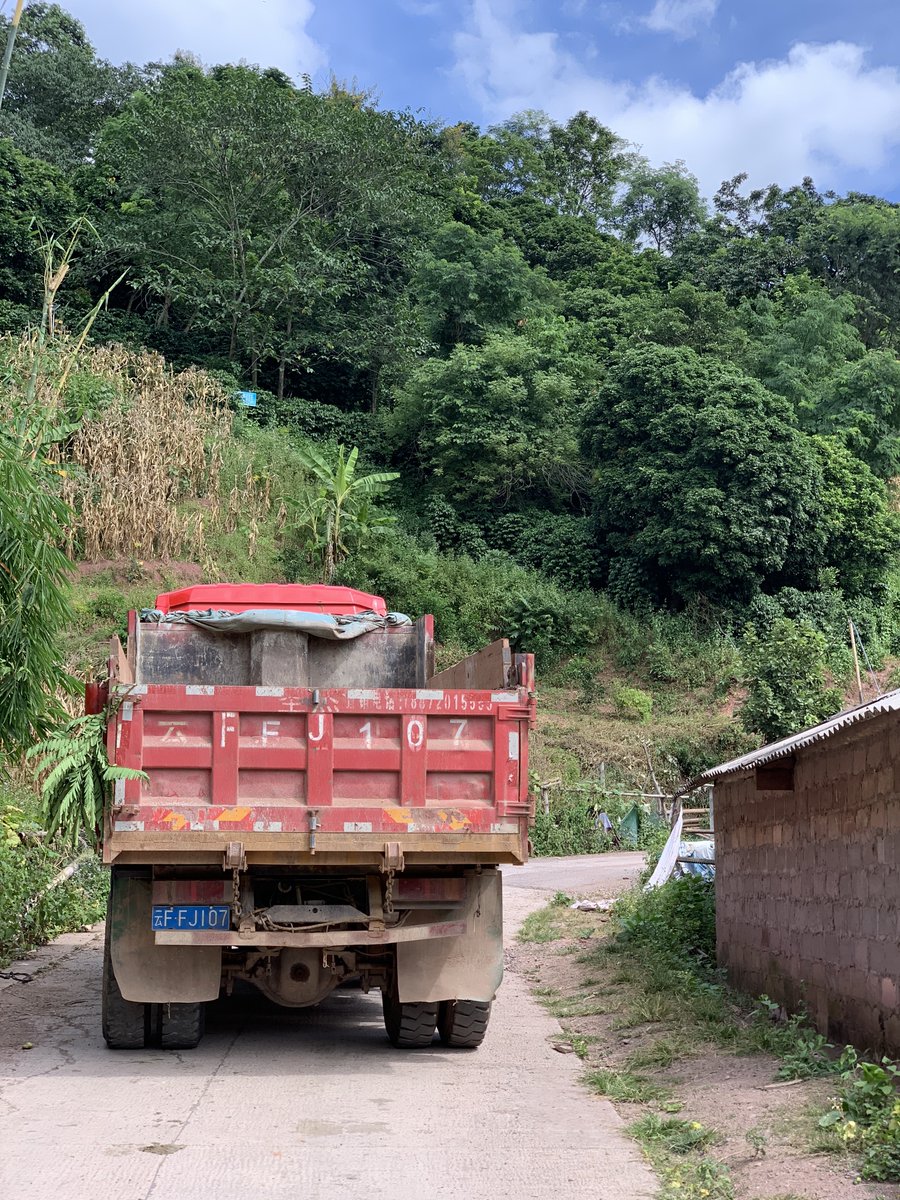 We continued south and then tried to reach the mine workings, along the route shown here:
13/ https://t.co/5p2jVCpzJ7 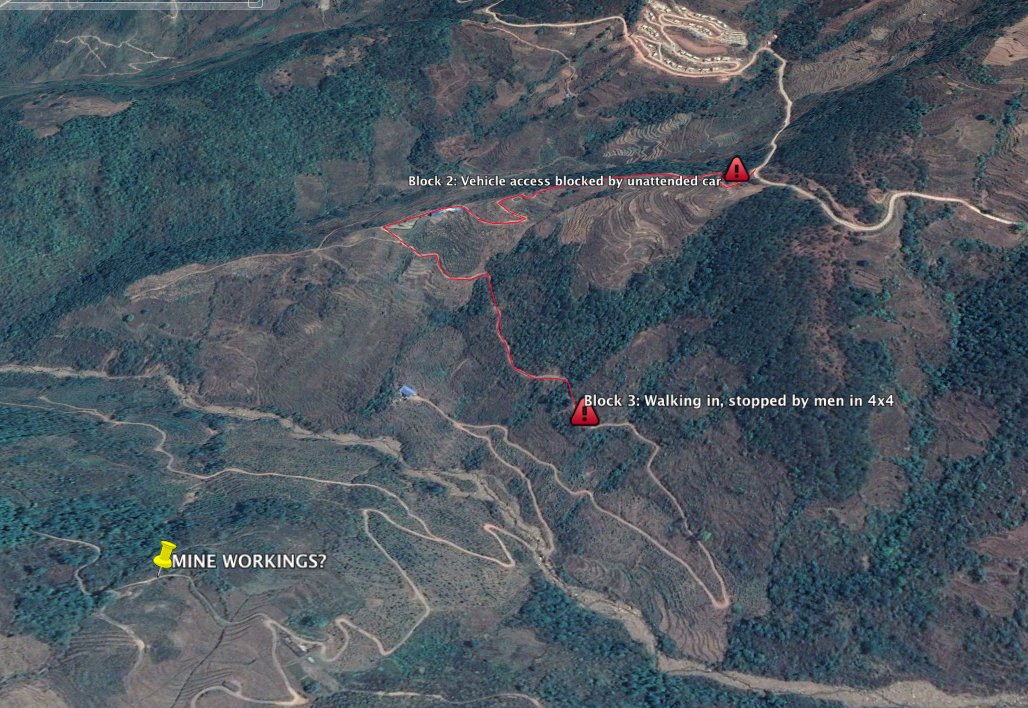 With the path blocked by a car, we set off again on foot, but were intercepted by some very angry men, in a 4x4, clearly communicating with someone in higher authority. Groups of other men hung around and, we were told, they would soon turn violent if we didn’t leave.
14/

We backtracked and attempted to turn south again. This time finding our way blocked by a small van. Further along the road, a car with plain clothes police sat in wait. One man told us his job was to keep us out. We would not reach Danaoshan again.
15/ https://t.co/zKJblE3ikQ 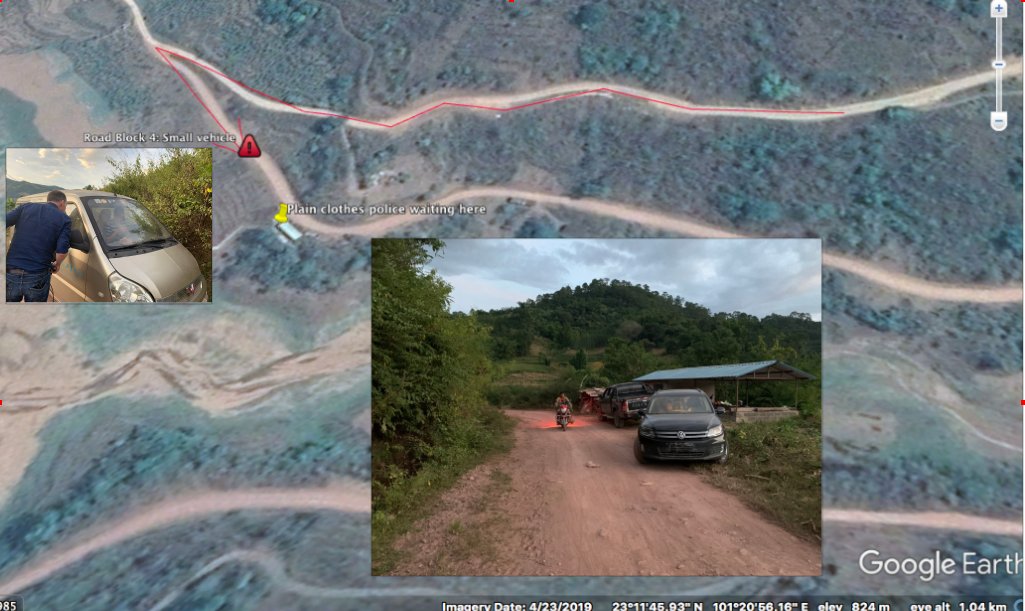 Defeated, we tried to head to the Shitou cave, where WIV researchers found the bat virus that led to their insights into Sars1. That discovery set in train the effort to collect, sequence and experiment on coronaviruses across Yunnan, including of course at the Tongguan mine.
16/ https://t.co/S0mZhYliS7 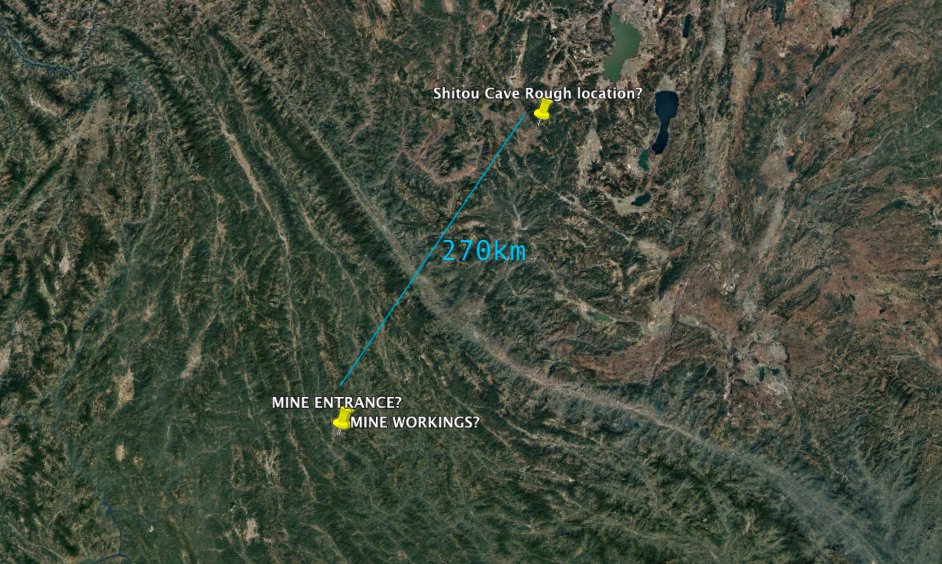 We had no plans to enter the cave but thought it might provide a location for a reporter standup, and we hoped to speak to locals about what they knew about the huge scientific field study that had been going on around them.
17/

We were blocked again. First, by another lorry:
18/ https://t.co/YWxOG0li8j 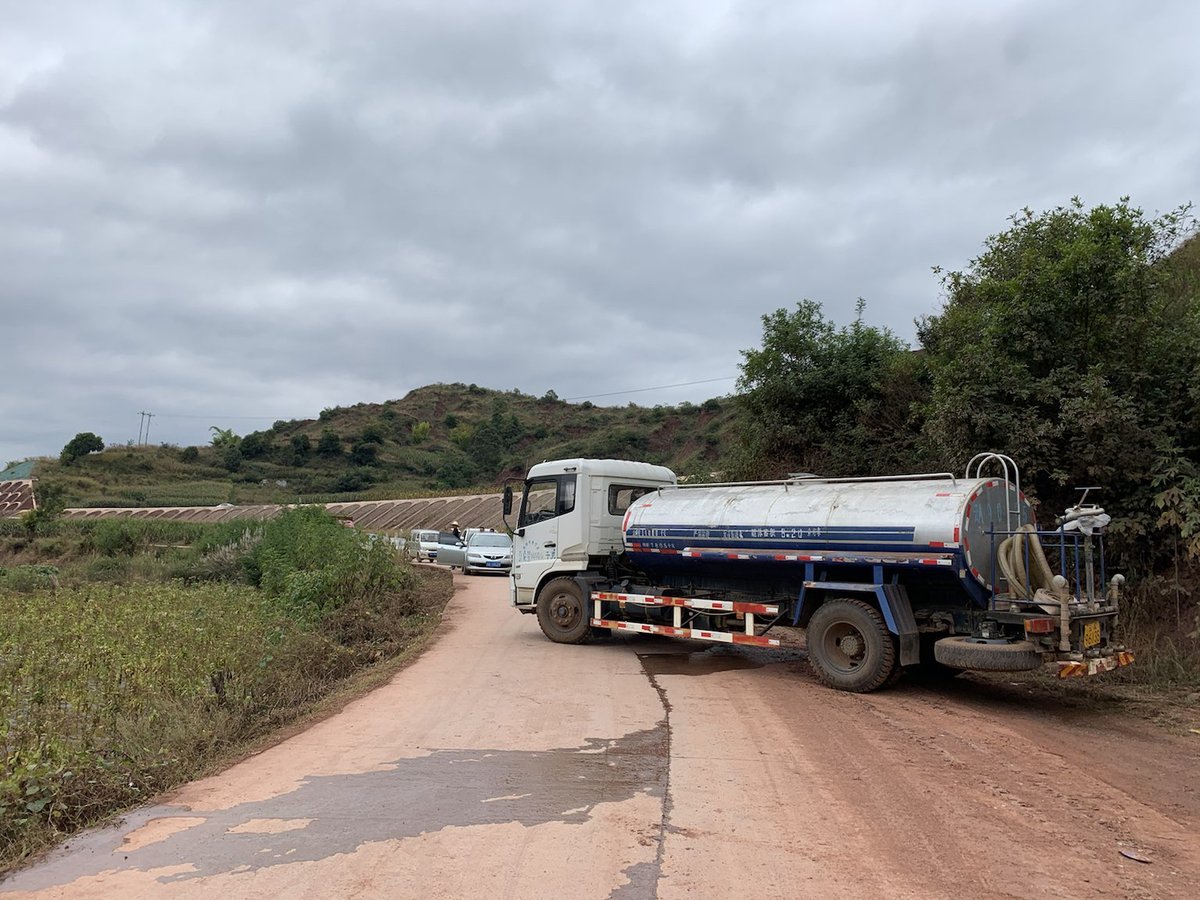 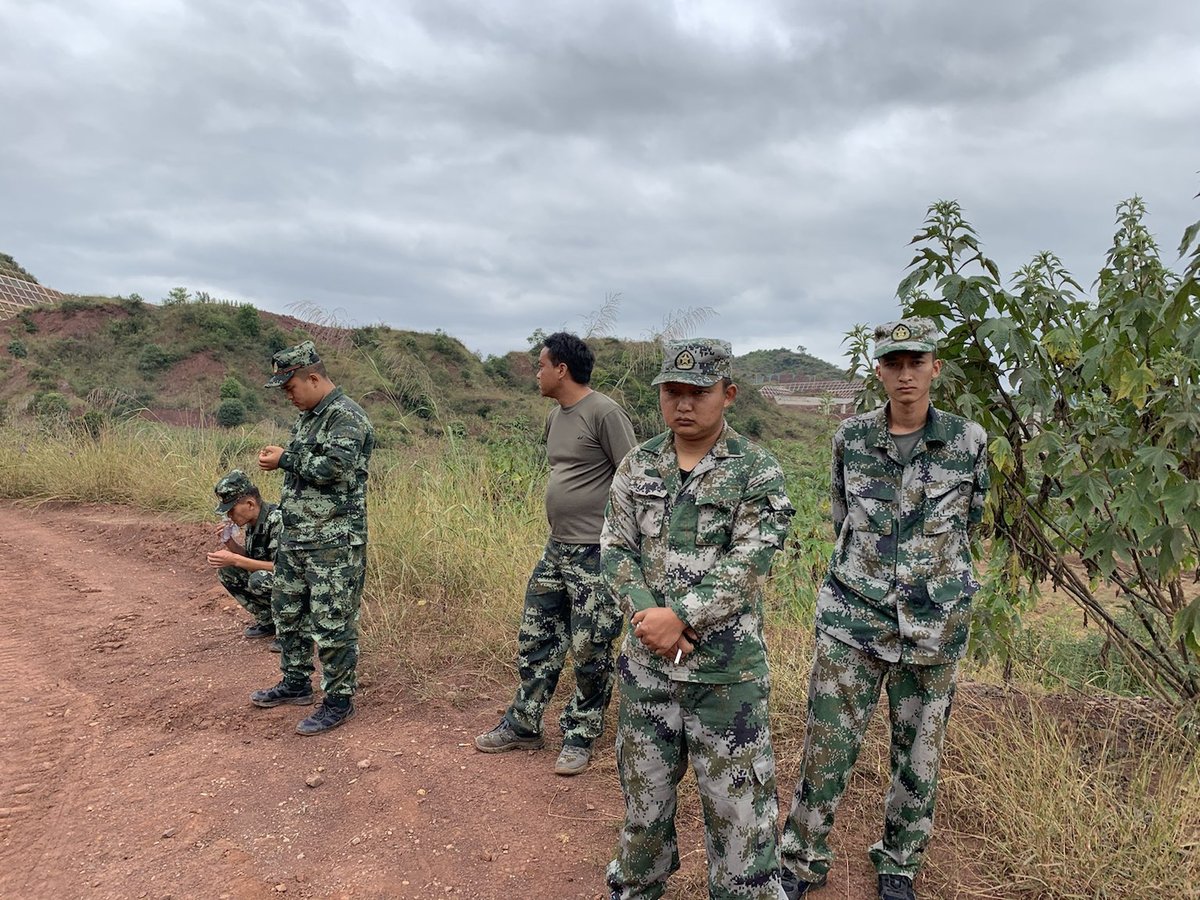 … and finally by a “broken down” car. We were held in this field for over an hour.
20/ https://t.co/lLlx3GVyTM

By now you get the idea. It's impossible to overstate just how large and coordinated the effort was - state-security, plain-clothes police, uniformed police, officials, and local residents. When we tried to talk to anyone, they’d turn their backs.
21/ https://t.co/z5Dbem3DXt 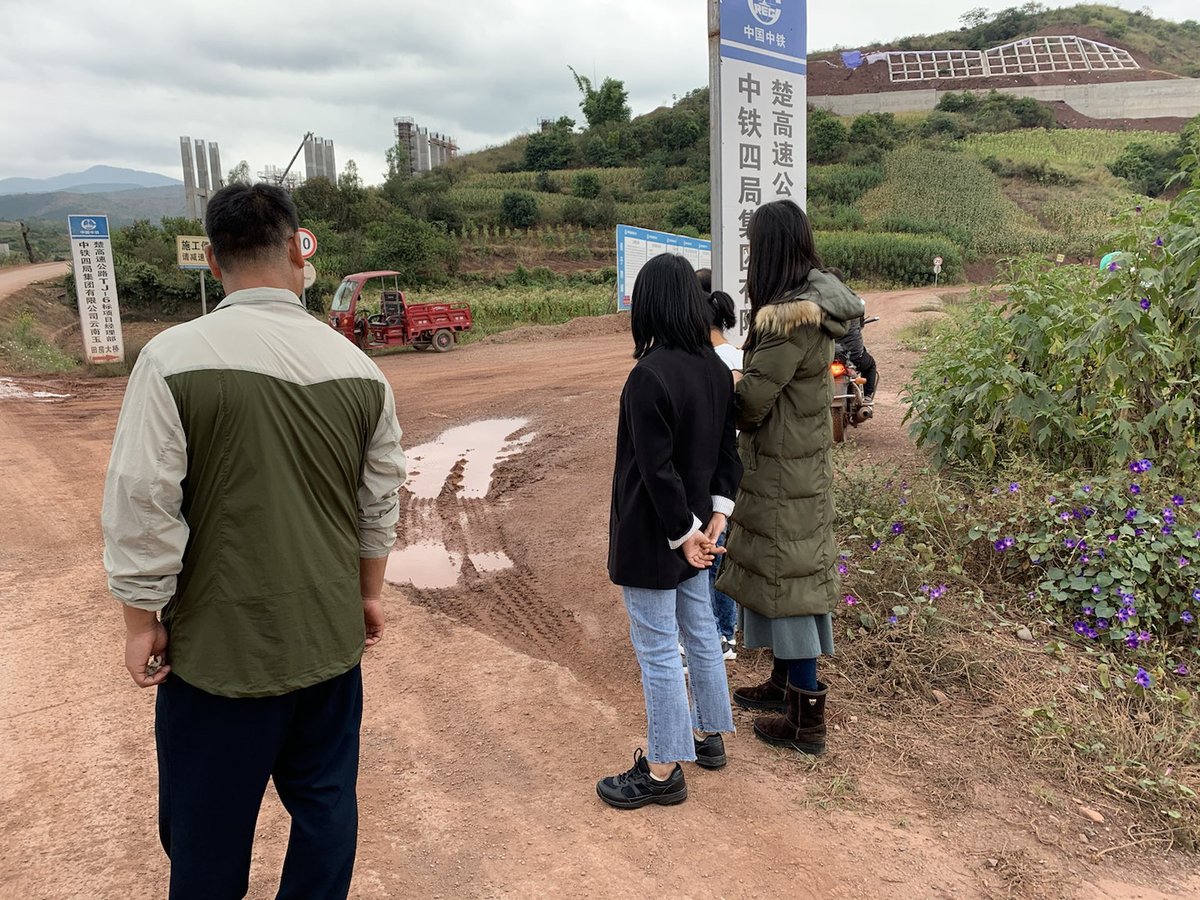 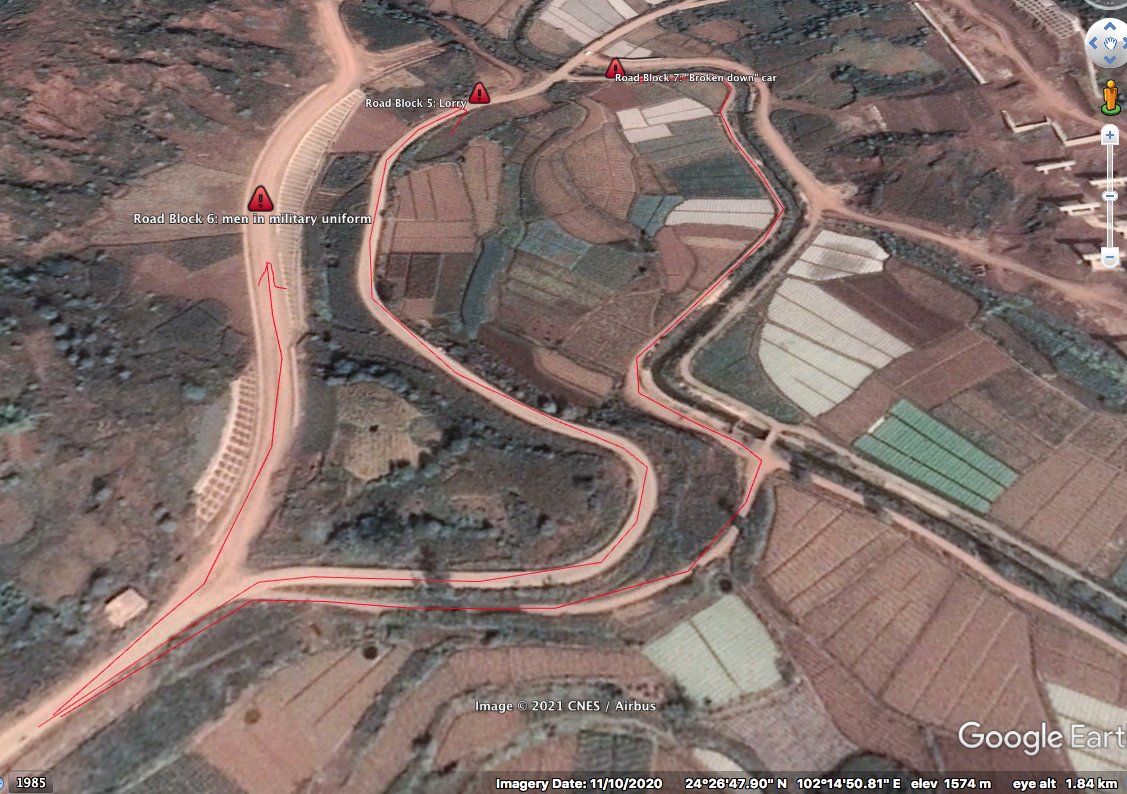 The threats and pressure I faced over my reporting in China – which eventually forced me to leave – weren't only because of my work on Xinjiang. Officials also told me that red lines were being crossed for my reporting on the virus, like this piece:
23/
https://t.co/V9tH7IRPDp

There is no proof the virus leaked from a lab. But, of course, that’s the point. Without transparency we can’t rule it out either. I’m proud to have been part of one of the first MSM news teams to ask these crucial questions.
24/end
https://t.co/7sSW2HJgkY