One of my goals this year was to be more aware of the diversity (or lack thereof) of my source list. To that end, I've been tracking (as best I can) the gender and race of everyone I quote in my stories.
In the interest of accountability, some stats: 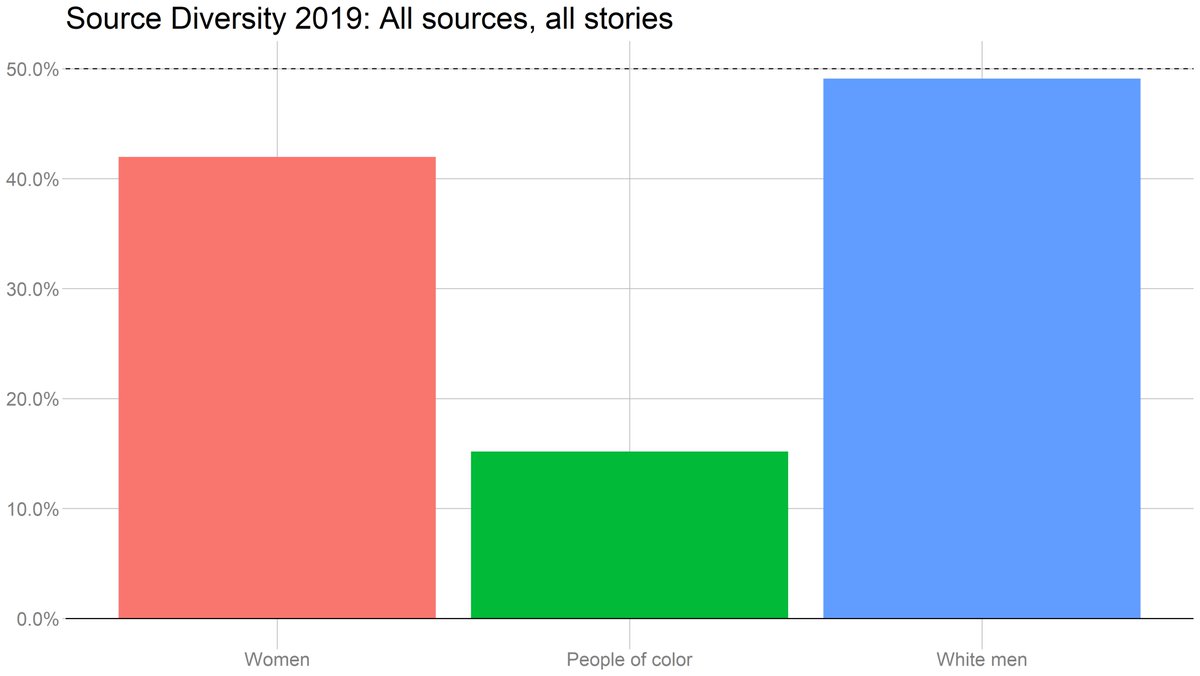 Note that "race" is in many cases my own best guess -- I didn't always ask people about their racial identity. On gender, I did track people who identified as non-binary, but the numbers aren't large enough to present here.

Other notes:
- On multi-byline stories, I didn't distinguish between ppl I called/my colleagues called. But I excluded stories where I contributed only data analysis.
- Stats are for final versions -- in some cases (e.g. the jobs report), quotes drop in/out as stories evolve.

Focusing specifically on people I quoted as experts (mostly economists, but also political scientists, industry analysts, etc), 44% were women and 11% were people of color. Again, close to half were white men. https://t.co/bLclHf5qgt 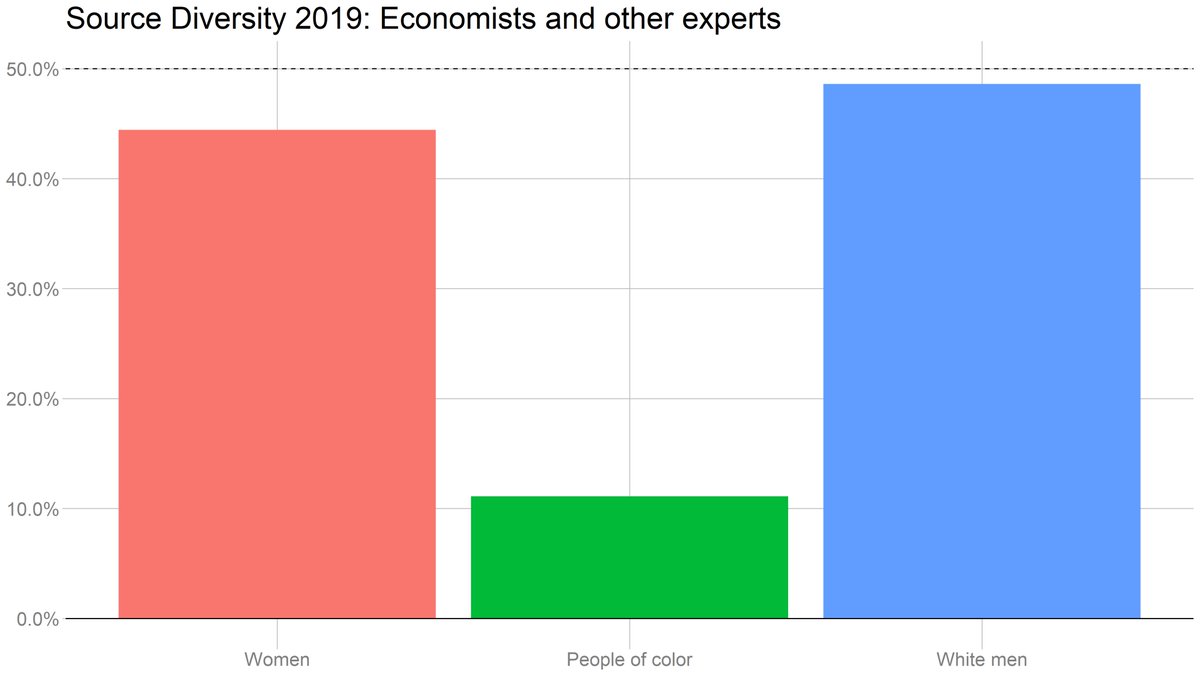 Among people I quoted as examples/anecdotes ("regular people," survey respondents, business owners, etc), 40% were women and 25% were people of color. Just under half were white men. https://t.co/M2FCRWGXg3 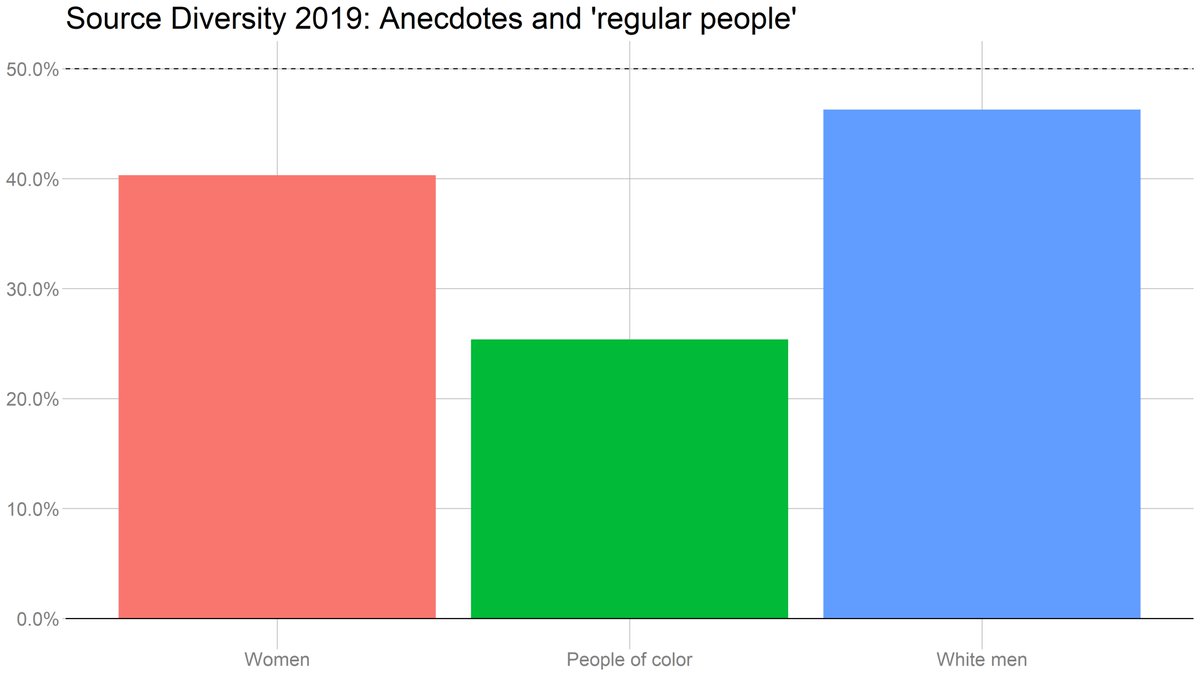 (There is also a third group of officials/spokespeople/etc. where I had little choice about whom to quote. They are included in the totals but not in the breakouts. I tried to use this category sparingly, since it's an easy cop-out.)

Some brief thoughts: This is the first year I've tracked this systematically, so I can't compare to prior years. But I suspect the act of tracking this led to more diversity in my source list, which was part of the goal.

I would say I didn't do too badly on gender diversity this year, although my goal for next year will be true parity (or maybe I should overshoot to make up for this year!).
I clearly have a long, long way to go on race. That will be a focus for 2020.

Interestingly, my sources were significantly more diverse in stories that weren't written on deadline. That suggests that I'm doing a good job searching out sources when I have time, but that under deadline pressure, I fall back on a core group of white guys. https://t.co/W7jp0oJsgO 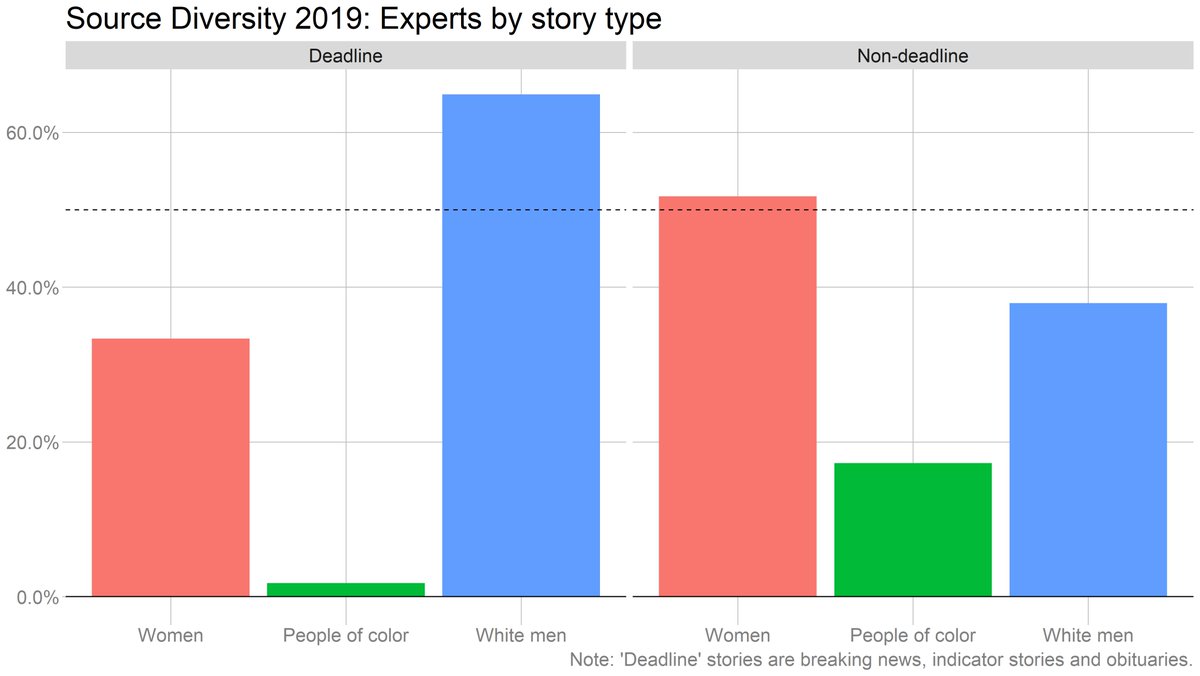 Two final notes: First, gender and race are clearly NOT the only measures of diversity that matter. Geography, ideology, socioeconomic status and many, many other factors are also important.
Race/gender are just relatively easy to track, and are a good starting point.

Second, I'm started doing this because I believed it would improve my journalism. A year in, I'm even more convinced of that.

It's very easy as a beat reporter to fall into a trap of calling the same dozen people for every story, even when they're not really the best/most knowledgeable expert on a particular topic. (See above re: "core group of white guys.")

This exercise forced me really to think about whom I was calling and to seek out new voices. Even when I ended up quoting a white guy, it was often a different (and more appropriate) white guy than the ones I'd called in the past.

And, of course, very often the best person to call was *not* a white guy, which became clear once I spent time going back to the literature or pushing past the first (proverbial) page of my source list.

Anyway, I don't want to add too much commentary here, because the real point is to put out these stats for accountability. I plan to repeat this exercise in 2020 and will report back.
Happy new year!