Trump managed to avoid paying taxes on almost all of it.

Latest in @nytimes tax series. by me, @russbuettner, etc. https://t.co/Cp9x0wSCYn

Trump's lenders forgave or canceled $287M in debt. The vast majority was related to Trump's Chicago skyscraper, which he built using borrowed money.

When Trump defaulted in 2008, creditors could have tried to seize the property. But they decided it wasn’t worth the fight. https://t.co/luUg5q3ruH 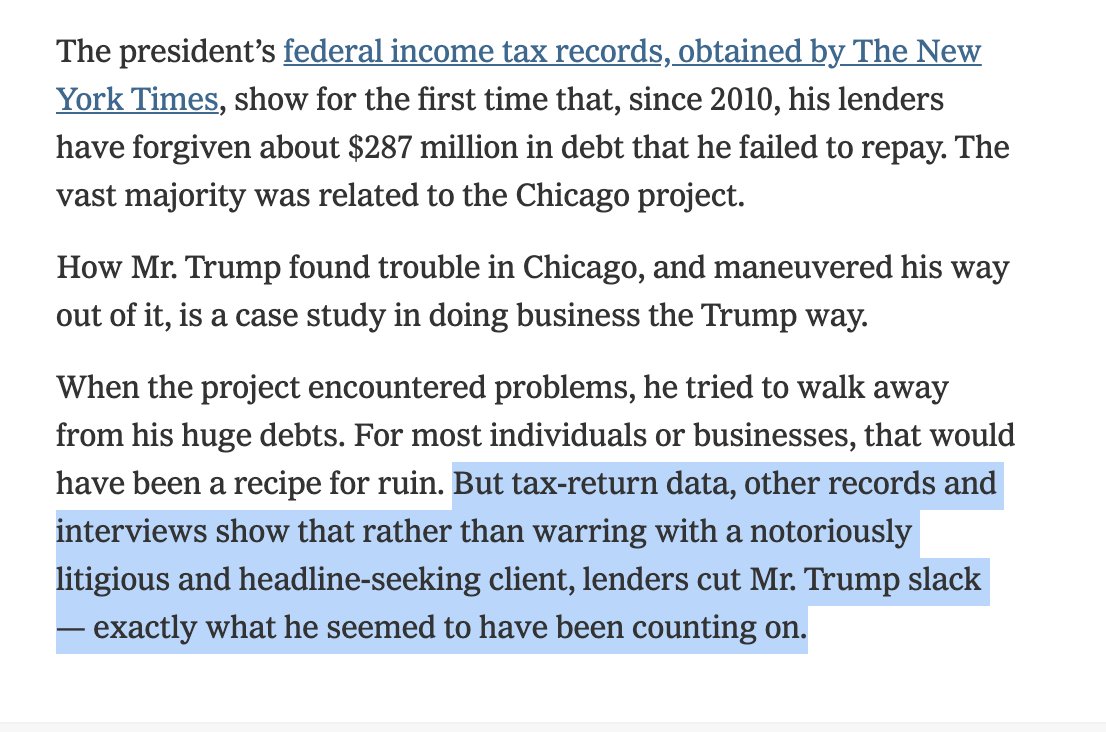 Instead, hedge funds and private equity firms threw up their hands and forgave most of what Trump owed.

Two of those firms were run by men who later got roles in the Trump administration: @stevenmnuchin1 and Stephen Feinberg, who leads a White House advisory panel. https://t.co/dbhnlNlUd6 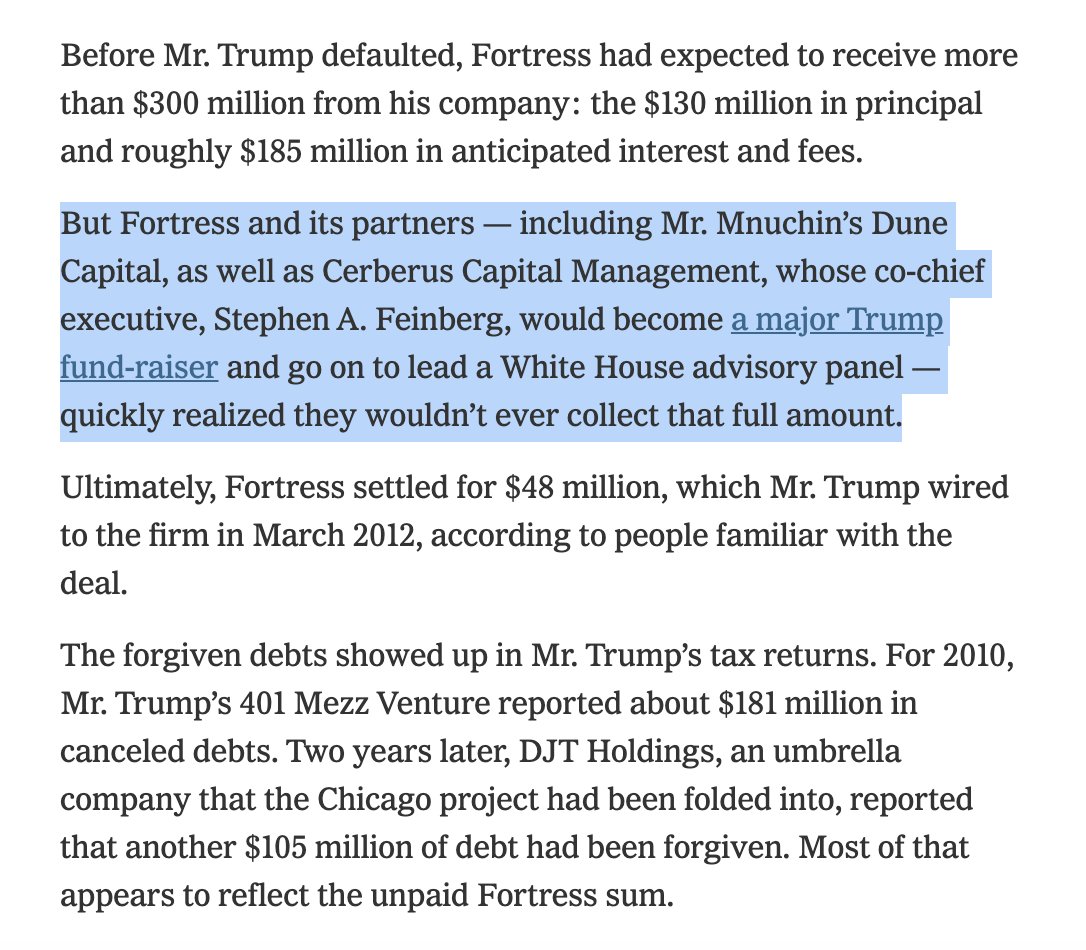 Trump’s other big lender in Chicago was @DeutscheBank. It gave Trump extra years to repay the $334M he owed.

By 2012, Trump still owed $99M to DB. So, one DB division lent him that exact amount to repay another DB division.

That $99M is more than 2x what I'd previously known. https://t.co/pgDahcGHnv 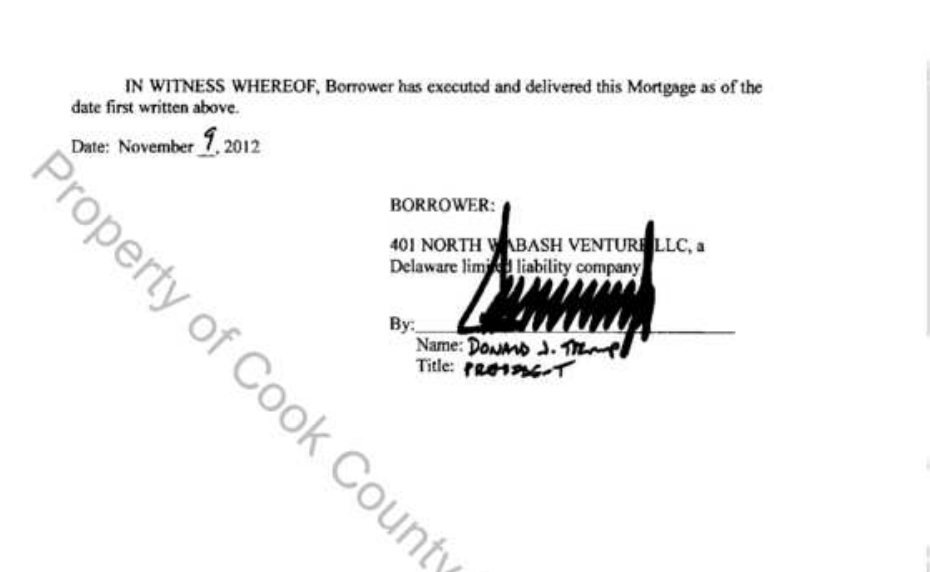 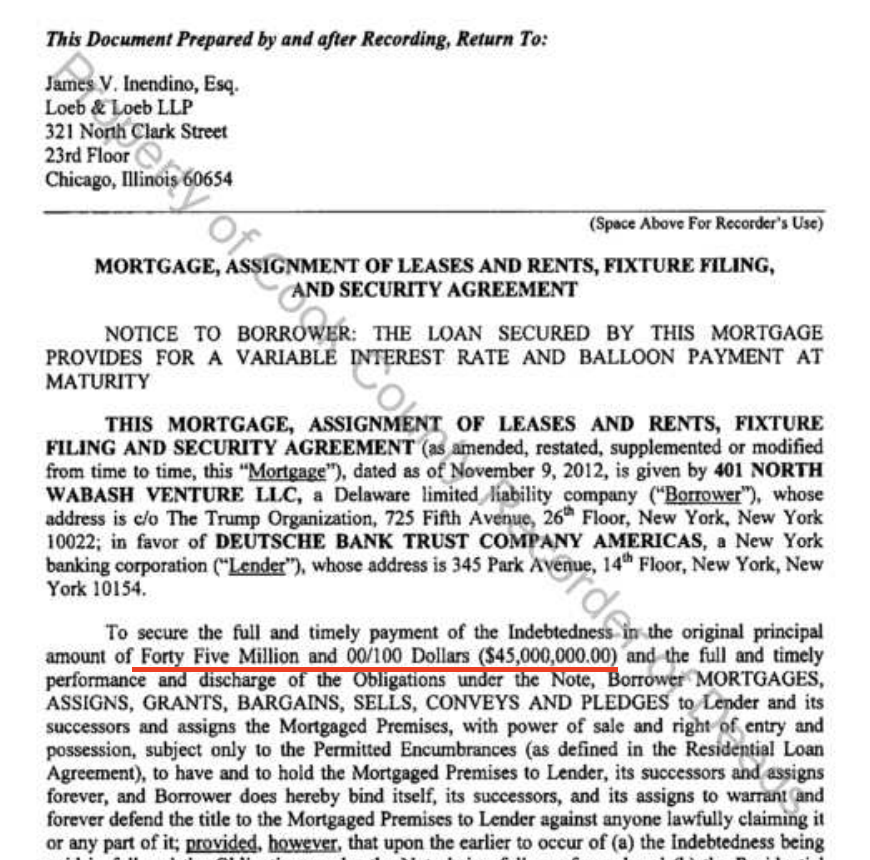 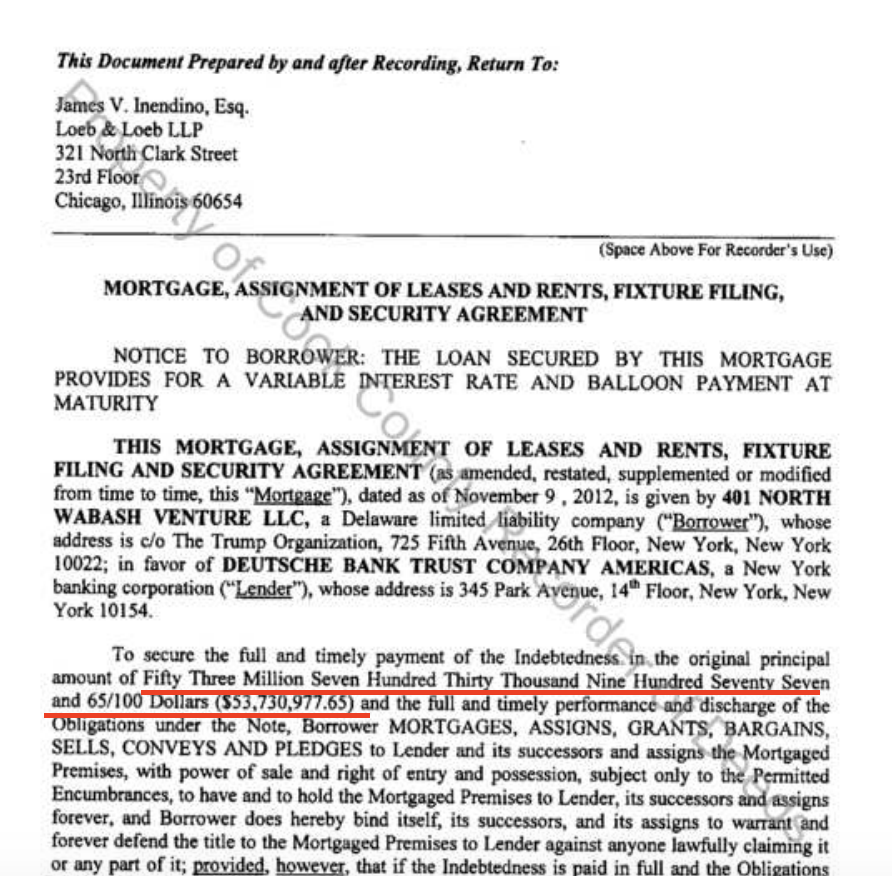 Deutsche Bank still wasn't done with Trump in Chicago. In 2014, it lent him another $24M.

The day after Trump won the election. https://t.co/WelJaHmfW3 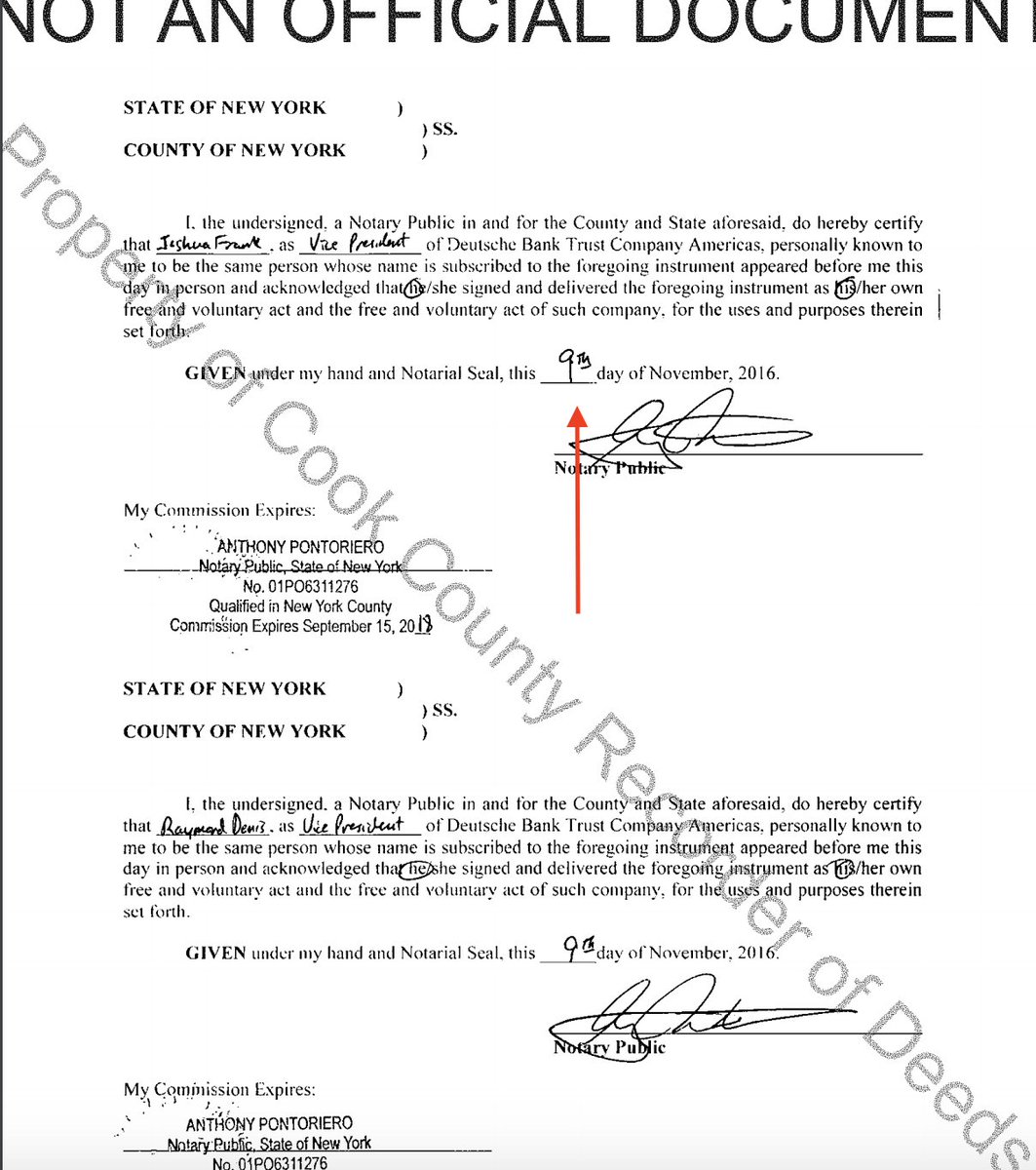 If @realDonaldTrump defaults, things will get crazy.

About 6 weeks before Trump defaulted on the Chicago loan, claiming that he'd been devastated by the financial crisis and couldn't possibly repay his lenders, he attended a ceremony at the nearly finished skyscraper.

About 7 months after that ceremony, the Trump family was desperately trying to sell condos into a very weak real estate market. So @IvankaTrump recorded a sales pitch and gave viewers a video tour.
https://t.co/xVwBQPElpO

On tomorrow’s @nytimes front page: @realDonaldTrump and @DeutscheBank are together again, presumably for the last time before the election. https://t.co/BO0QZKbuwk 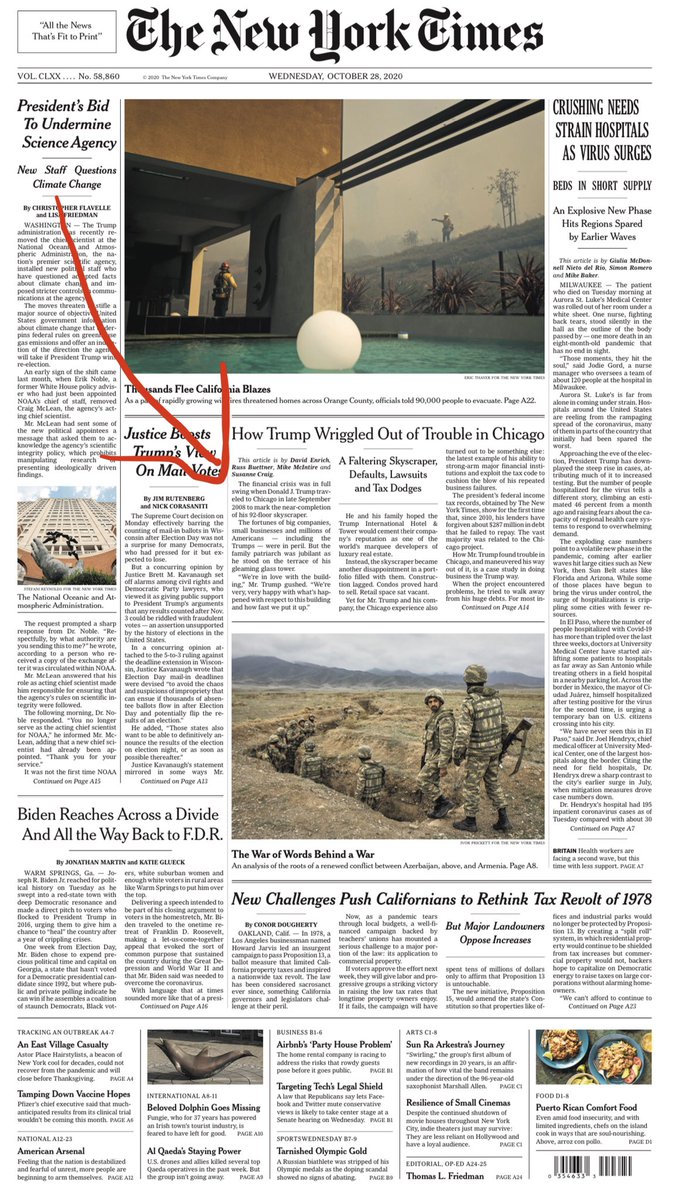 In addition to all the @nytimes colleagues who worked on this, I should note that I got helpful leads from previous reporting by @WendySiegelman @hvogell @DanAlexander21 @Fahrenthold @AlexNitkin among others. Thank you!