1/ A TaskRabbit contractor in San Antonio told me he stumbled onto a warehouse where people were repackaging non-medical Chinese masks so they could pass for medical use and be sold to Texas.

So began my latest journey into the world of COVID profiteers ..

3/ The old packages were labeled in all caps “MEDICAL USE PROHIBITED.” The new bags didn’t have that warning. 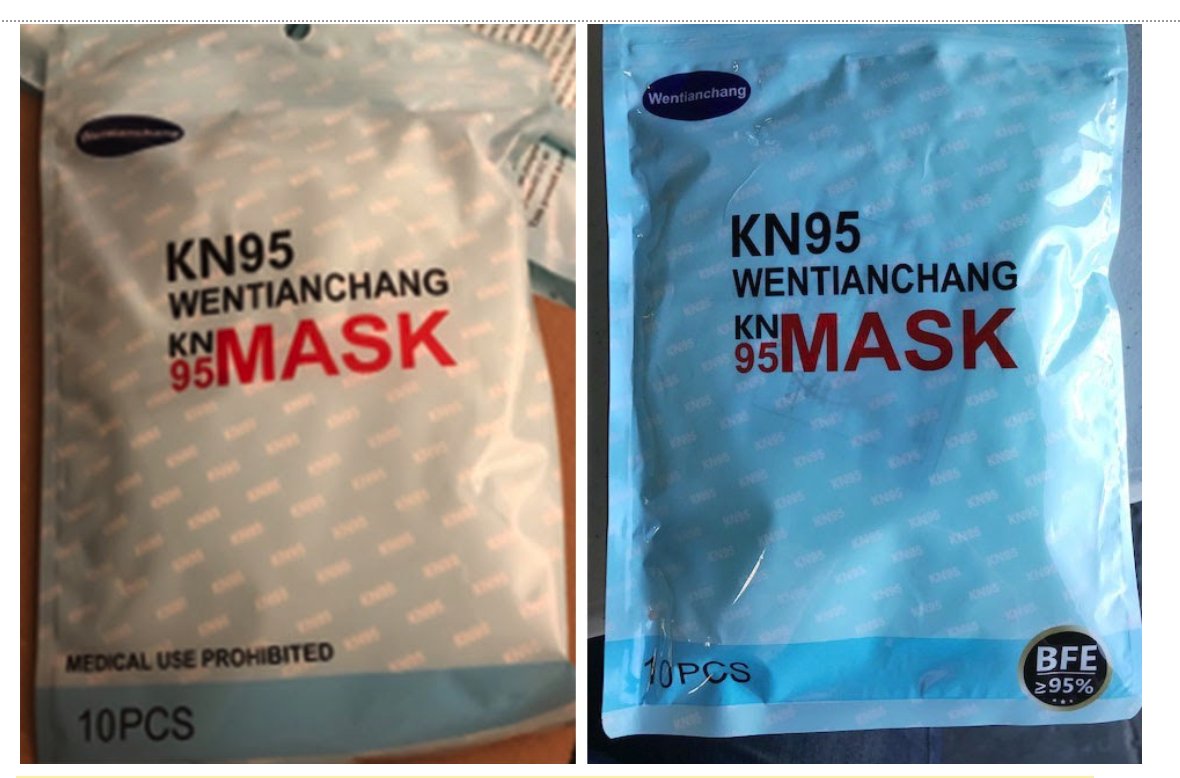 4/ Medical workers’ best defense against a virus that ravages the body with horrifying complexity is a simple, but trustworthy, mask. But many thousands of these repackaged ones were potentially making their way into the Texas supply. Here's the warehouse: https://t.co/FMVZTf32Dj 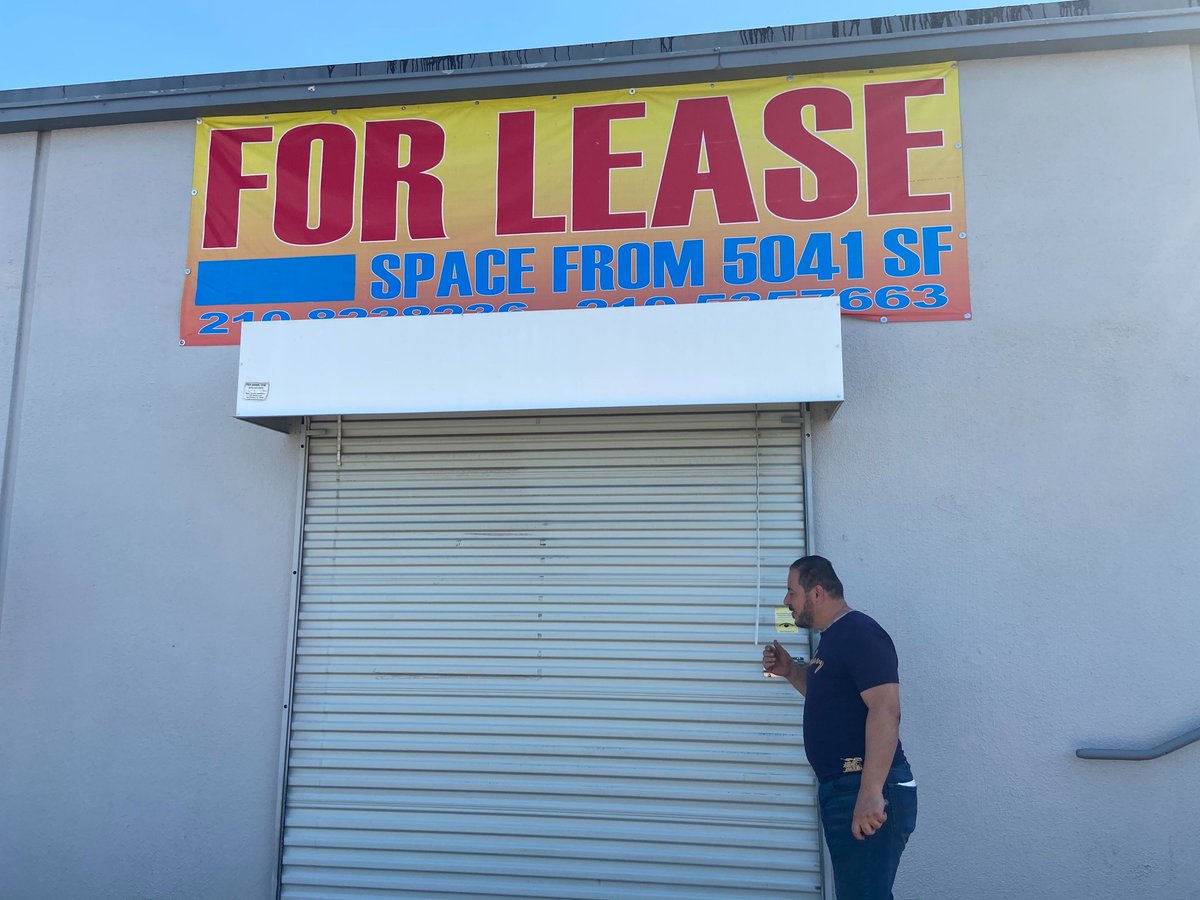 5/ Before flying down to Texas to look into it, I did a little research from my DC apartment. Jaime Rivera, who hired the TaskRabbits, had posted some intriguing photos on Facebook of boxes of masks bursting at the seams and stacked high in his garage. https://t.co/87bLOqg6dV 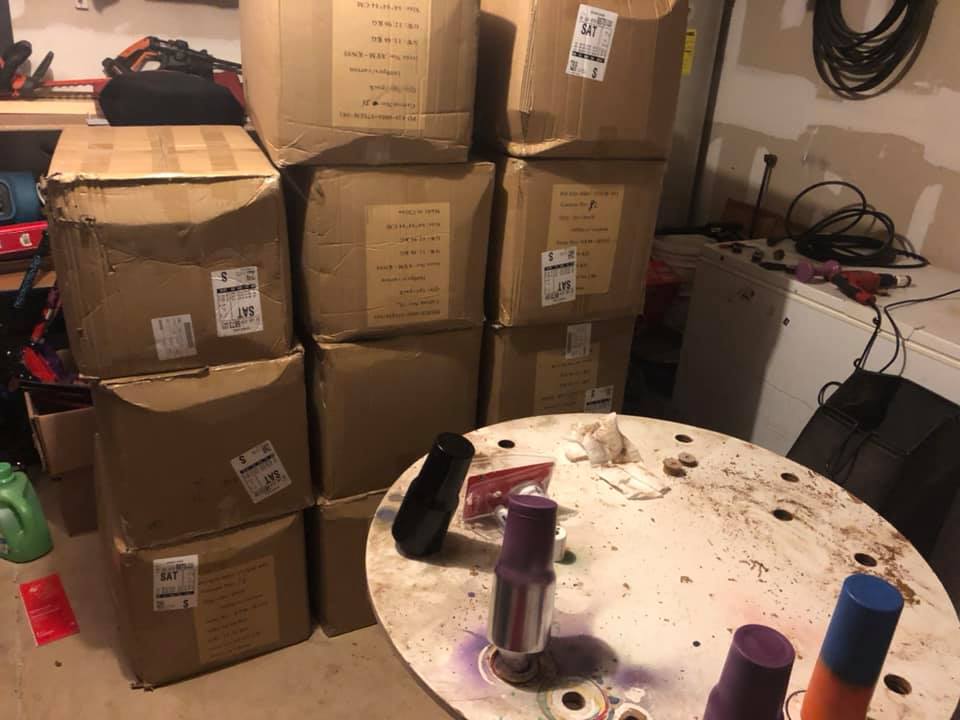 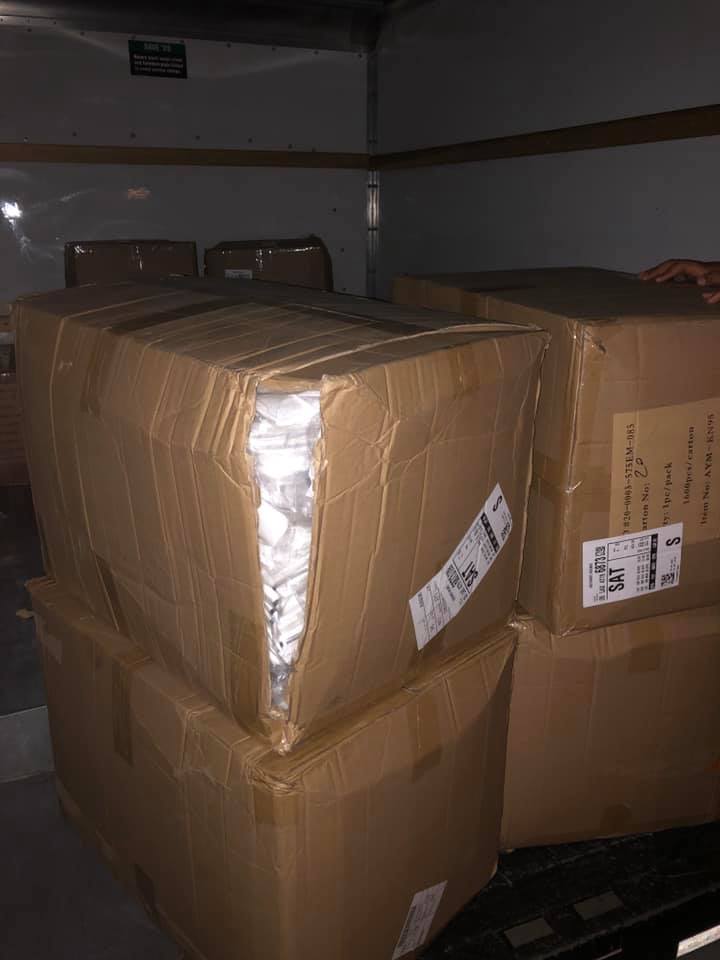 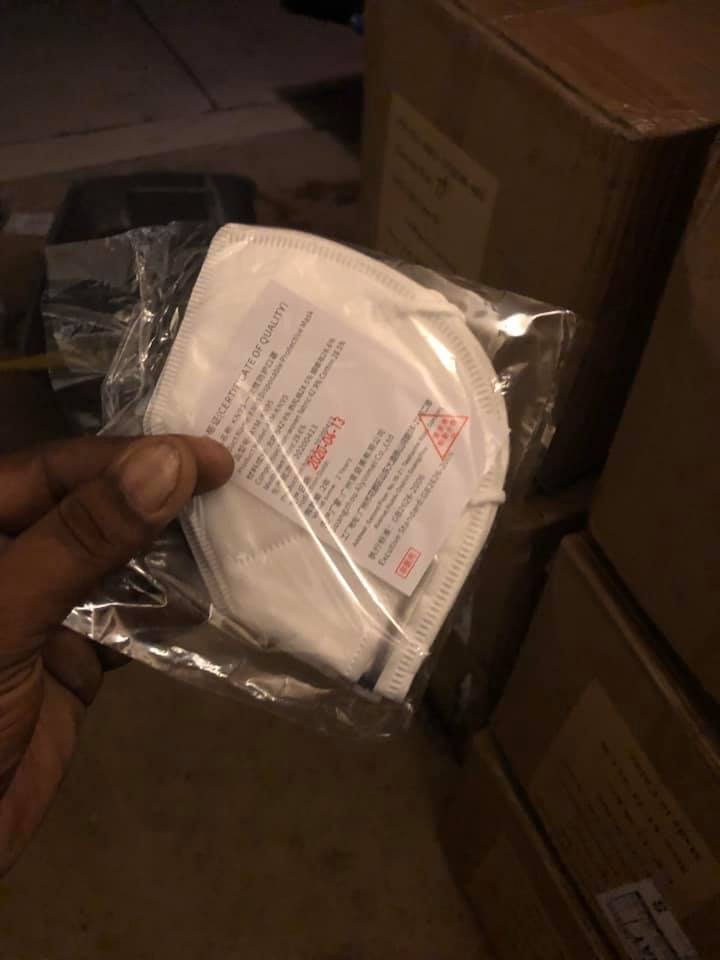 6/ These are labeled AYM-KN95. Early on the FDA approved these for use in healthcare settings. But they were taken off the list in May. They’re nowhere near the 95% effective required - tested as low as 39% in CDC tests …

7/ More curious was a screenshot Rivera posted of a $2k payment from “BM.” One of his Facebook friends noted “looks like code for a drug deal.” https://t.co/MSQ8ebcJwL 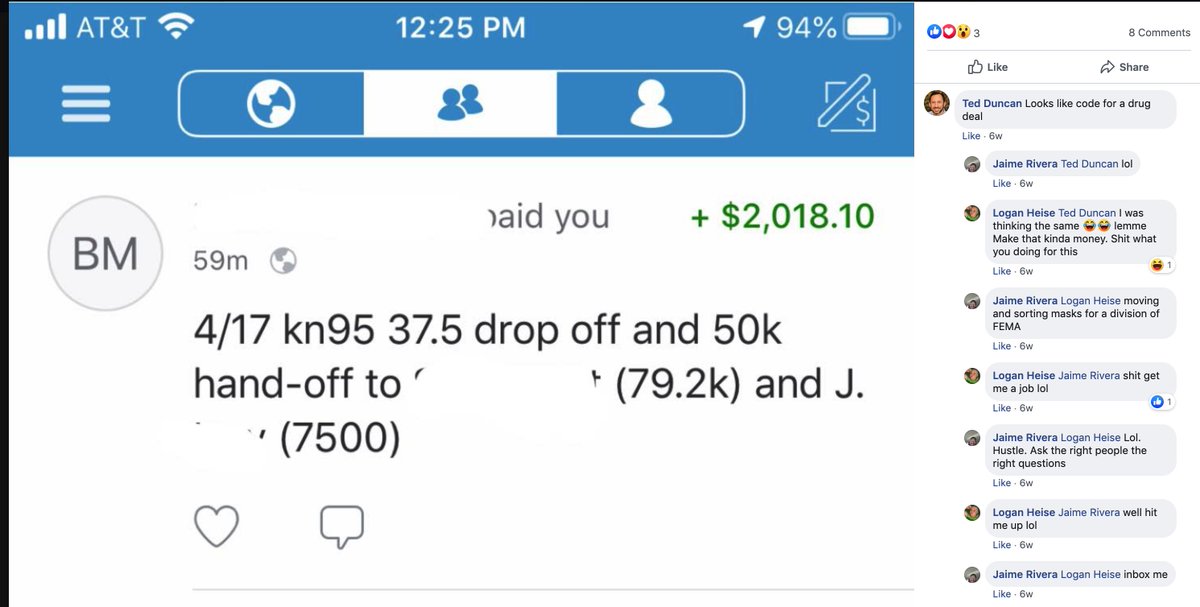 8/ So I pulled out my phone and looked for him on Venmo and was delighted to see all his transactions were public.

Someone named Brennan Mulligan was paying him and others on Venmo to repackage masks. Check it out … https://t.co/Inj36vRuu4

10/ Makes sense, I thought. As I found in this story, a lot of apparel and textile businesses used China connections to make their way into the mask market. https://t.co/CW0q2Bpc97

11/ That “131 boxes to TDEM” is delivery of KN95s to the Texas Division of Emergency Management, Texas’ FEMA, which supplies to hospitals inundated with patients. As you can see … Texas is in trouble. https://t.co/XqWoK0I1lU 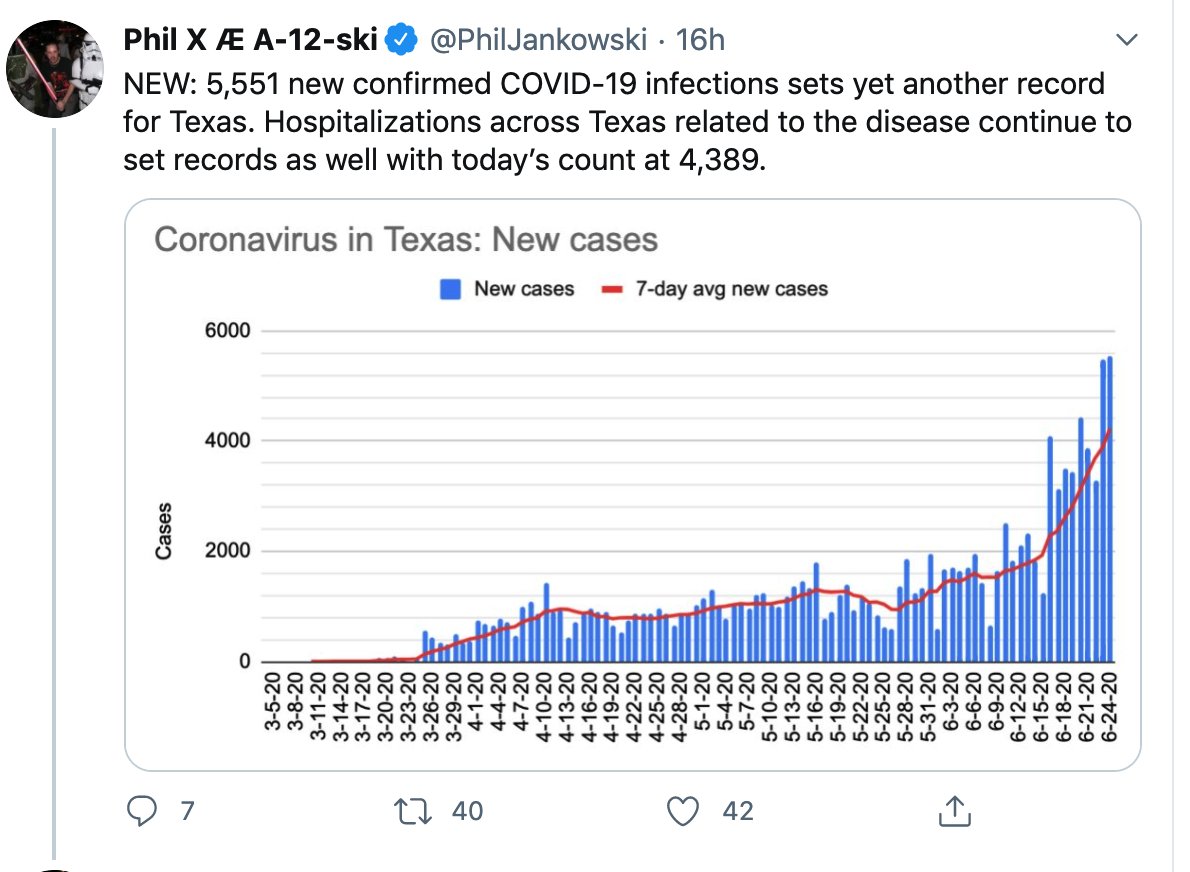 12/ Rivera and I talked on the phone at length. He agreed to meet in person but then cut off contact as my questions became more uncomfortable. Here’s some of what he told me …

13/ Mulligan had hired him through TaskRabitt to pick up masks arriving in Texas airports via Southwest Cargo jet. Some he delivered to TDEM, others needed to be repackaged.

14/ Rivera spoke as if it was just common sense. They needed to take MEDICAL USE PROHIBITED off the package so Texas could accept the masks. It’s not a big deal, he said, because Texas will inspect the masks. He said it was just red tape.

15/ As our conversations progressed, Rivera started to worry that maybe this wasn’t such a good idea. He was desperate, he said. His main income - doing jobs via TaskRabbit - had dried up because of the pandemic.

16/ That’s when Rivera mentioned he and Mulligan had been contacted by the U.S. Department of Homeland Security.

“His analogy was you’re telling somebody you have a Ferrari but you’re selling a Honda,” Rivera said.

17/ “Are you worried you were complicit in a crime?” I asked

Before he hung up and cut off communication, he added: “I’m not the brains of the operation, and I’m definitely not the wallet for it.”

18/ The wallet was Mulligan, who didn’t respond to my calls but sent some brief emails. He blamed the FDA’s flip-flopping on chinese masks and onerous Chinese customs regulations.

19/ He couldn’t get the masks out of China without the non-medical disclaimer, he explained. And the Texas emergency agency would reject anything that had the disclaimer.

20/ He and other mask brokers told me they shipped all these masks in after the FDA cleared a bunch of KN95s, but before they could sell them the FDA kicked a bunch of manufacturers off the list.

21/ So “the only solution,” he said, was to repackage masks. But problem was - the masks he was repackaging weren’t on the FDA’s list of masks OK’d for emergency use. Mulligan says he broke no U.S. laws.

22/ I told TDEM what I had learned and they confirmed Mulligan and Rivera had tried to sell the poor quality masks and Texas rejected them. TDEM’s vetting is really good, a spokesperson said.

23/ Mulligan tried to sell them to another guy, who was trying to sell masks to hospitals in Illinois, but the buyer told me he walked away when he learned they’d been repackaged.

24/ So Mulligan is stuck where a lot of opportunistic mask brokers are - with tons of sub-par masks that governments can’t and shouldn’t buy.

25/ Oh, yeah, and that Homeland Security investigation? The agency said it’s real, but the statement also reads like the law enforcement equivalent of ¯\_(ツ)_/¯. https://t.co/LI6EYMqs8M

26/ There’s a lot more detail in the story, some funny anecdotes and whatnot. I hope you’ll read it. https://t.co/6U4uKrV3JE

27/ If you know more about PPE brokers and investors, shoot me a note: david.mcswane@propublica.org

28/ and if you want to get our next big stories, sign up for propublica’s Big Story newsletter: https://t.co/tRqQoclFxB

PS - it remains a mess out here in the Wild West of PPE trading - companies pooping up overnight, untested, some whose owners have questionable backgrounds. Federal agencies say they’re vetting these companies but we’ve found a ton of problems
https://t.co/WKFB9gORbN