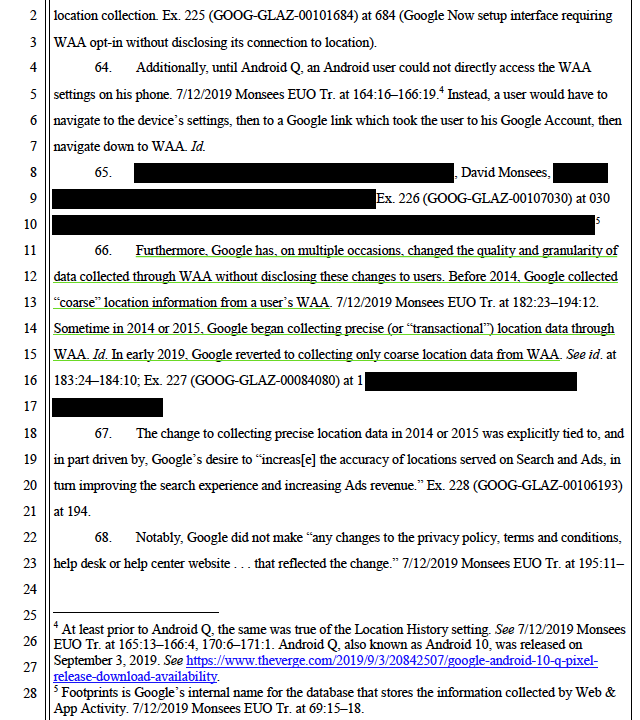 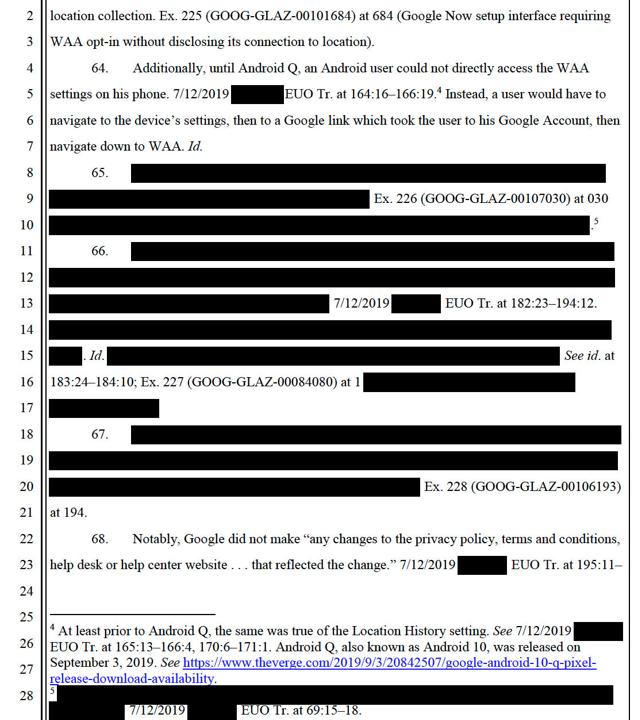 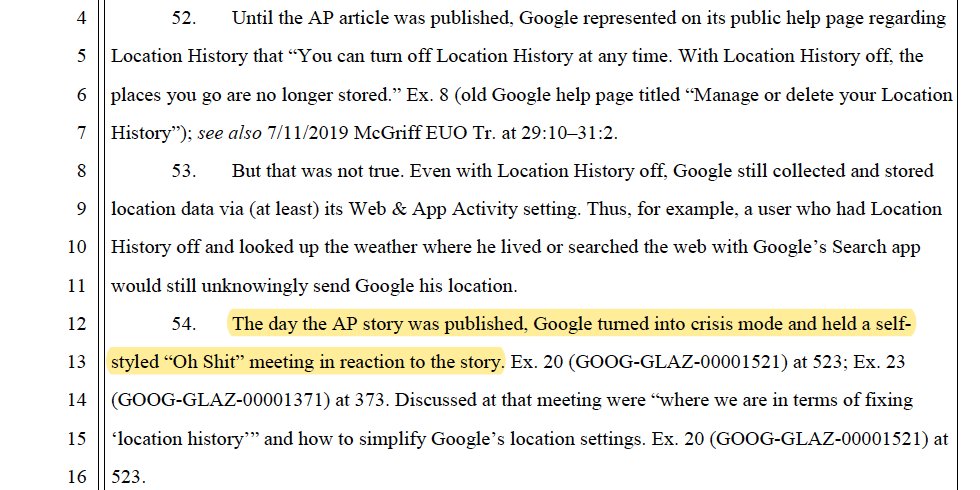 But now we get the fully unsealed evidence which shows a much more important fact - CEO Sundar Pichai was directly involved. In fact, he received “code yellow” updates from an SVP who oversaw the area of concern who started at Google more than twenty years ago an intern. /3 https://t.co/ncxhr4Yre9 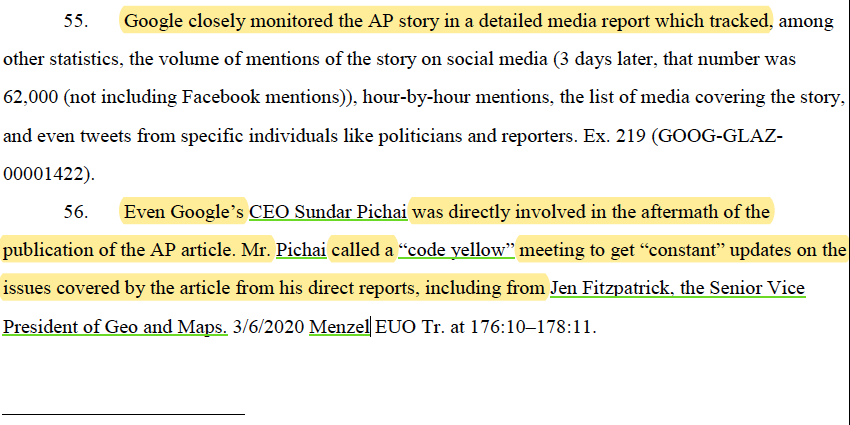 Most damning in newly unsealed evidence (1) Google’s employees admitting there's almost no way NOT to provide your location to Google (2) Google designs its ecosystem for location data collection.
“This doesn’t sound like something we would want on the front page of the NYT.” /4 https://t.co/Ke7d8IDDoQ 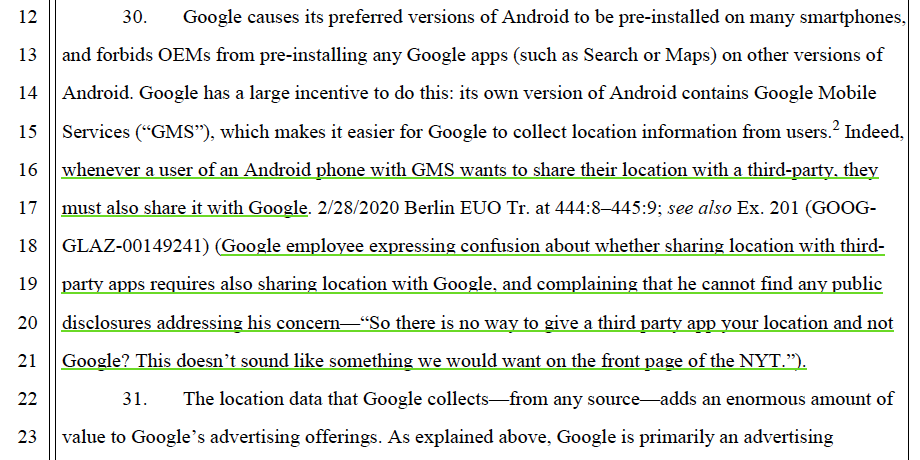 In fact, the VP of Maps at Google admitted during deposition that the only way to avoid Google inferring your home and work address is to essentially decide your own device by inserting false addresses. 🤦🏼‍♂️/5 https://t.co/a3gH1eBJSP 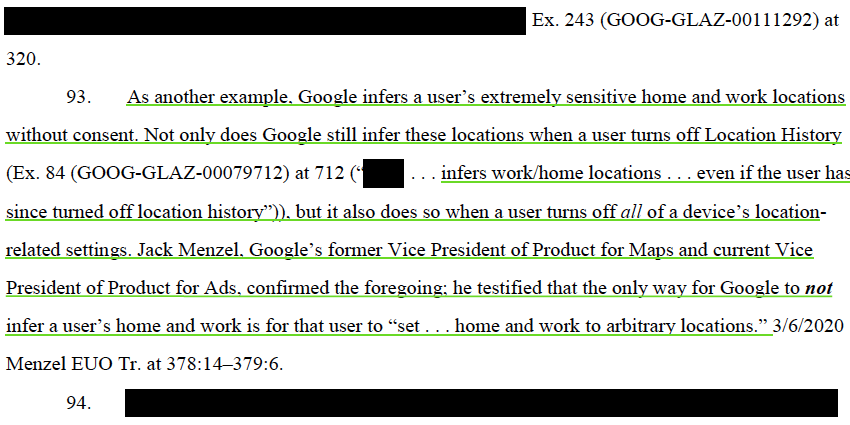 “WAA” stands for “Web and App Activity”… apparently you can turn it off and Location History off but then Google Maps does the surveillance for Google (note to all, switch to Apple Maps). Employees didn't seem to get this either. /6 https://t.co/InHp0Ofx0f 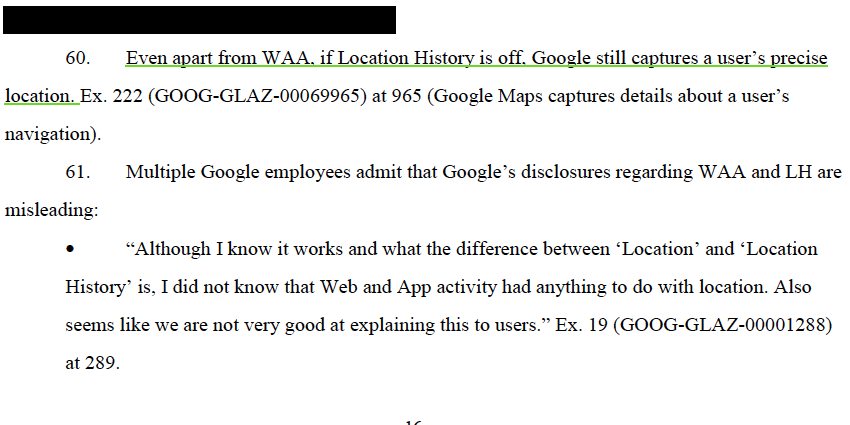 But we also learned in this newly unsealed material that something happens when settings make it easier for users to express their expectations not to have their physical location tracked. /7 https://t.co/TmI6Uuq3lA

How big of a drop-off was it? Check this out from the unsealed discovery. When users turned off location services more and more, it made search less effective on the phone. That's a BIG problem for Google. /8 https://t.co/9nD3l87Cfc 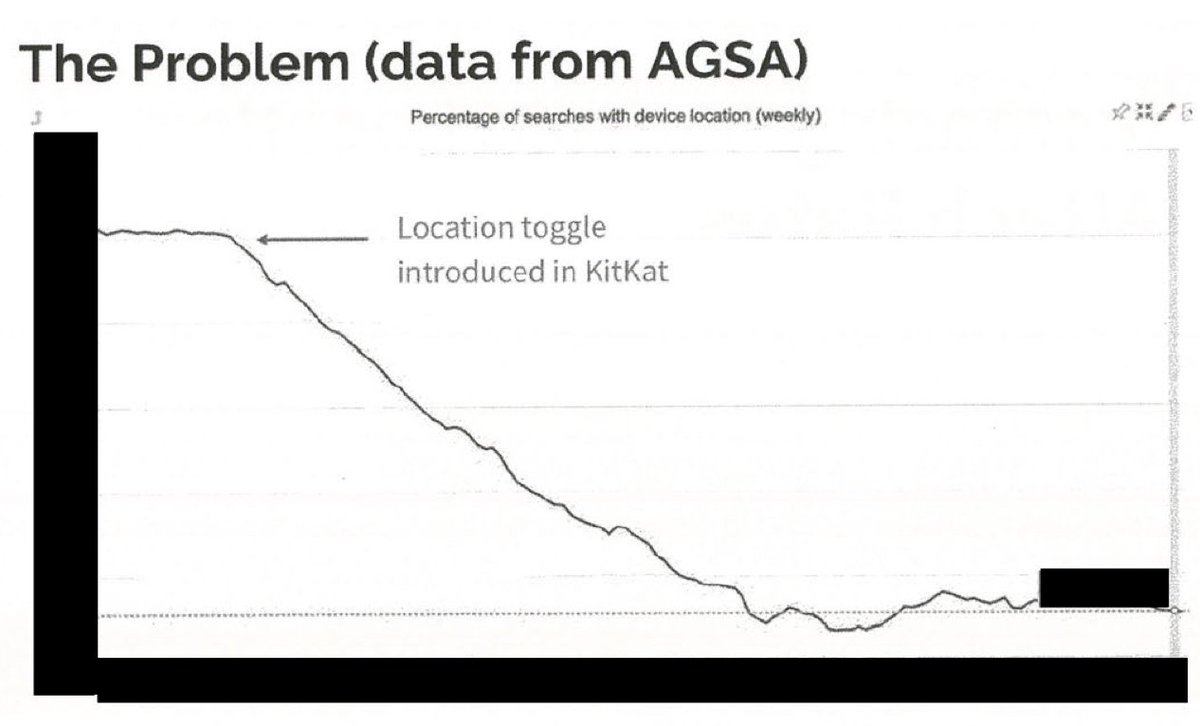 Google had to go to work to bury the setting and get OEM partners to do the same in order to drive back up what they call the "Location Attach Rate." Again, unsealed parts in green. /9 https://t.co/v28vcOQQpy 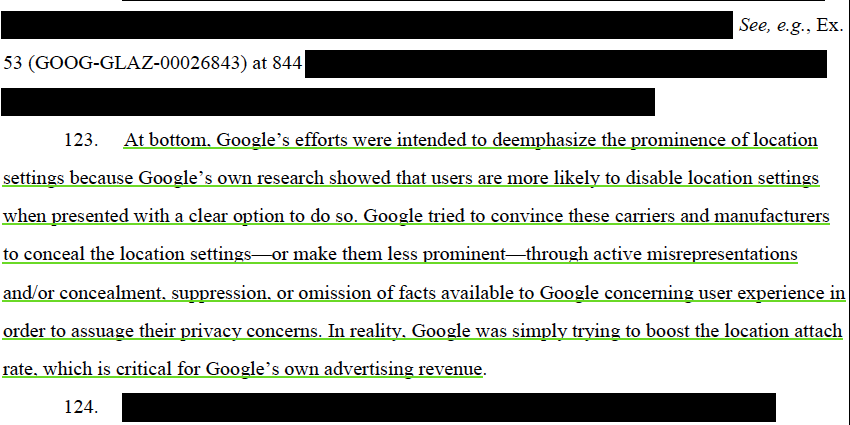 We don't know who all rolled over for Google. The complaint and employees said they didn’t have much choice as the only way to have Google’s key apps was to use their preferred design of Android. We did learn LG made the change for Google. /10 https://t.co/VlheM1e9OG 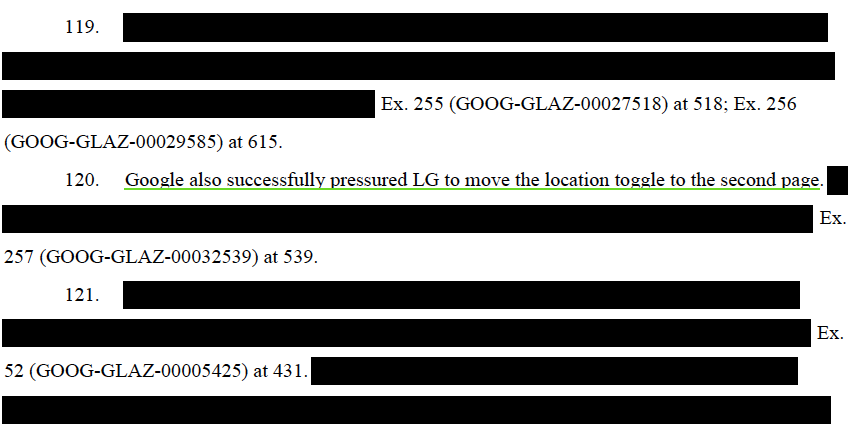 This is all core to their surveillance economics. Attorney General’s team rightly looked at the resources Google uses to maximize “location attach rates.” You could also frame this as a surveillance beacon considering how Google appears to abuse it. /11 https://t.co/VjUT11uPCo

Google’s own employees even comment how Apple is eating its lunch in the US market. No doubt, this only has become more so as Apple rolled out enhanced privacy features on iOS and its browser while Google’s surveillance economics continue to get more and more attention. /12 https://t.co/ojnVwTGe4M

Google's own employees seem to recognize Google’s need to maximize surveillance economics creates a tension with how users expect their Google-owned browser and operating system should work. This problem is getting worse by the day. /13

We also now see in exhibits that the AP story triggered honest reactions from Google’s own employees. Someone - likely in legal department - begged employees not to comment on the report likely knowing it would ultimately be included in discovery materials. /14 https://t.co/I2y3ZCqJZF 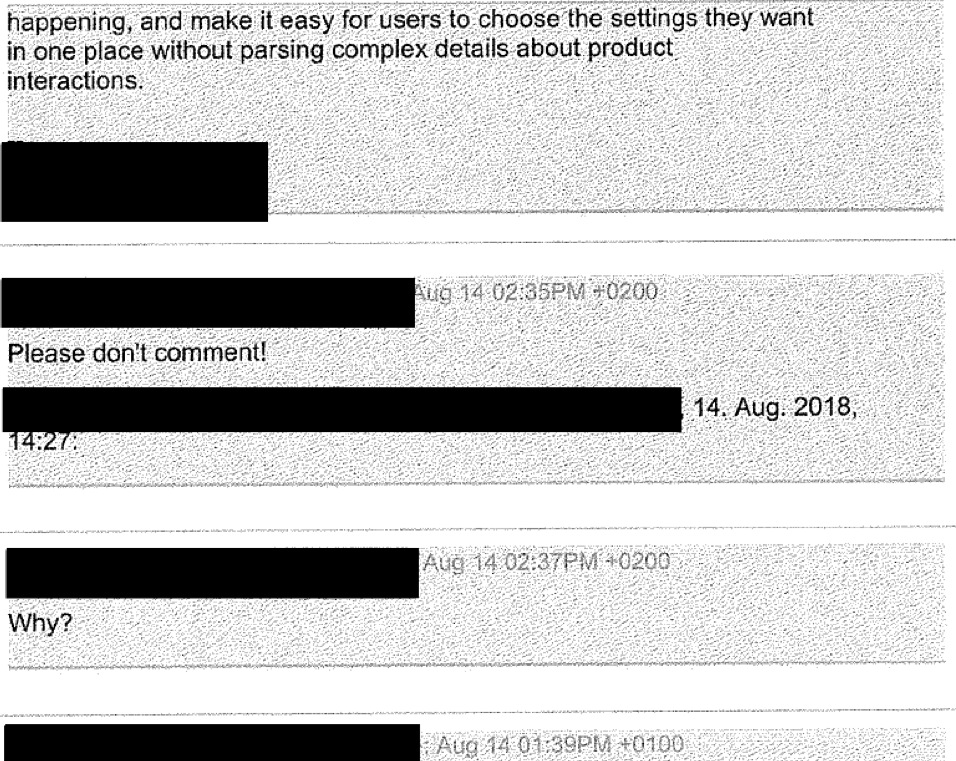 Google employees' disgust and concern is immediately evident.
Even a privacy-focused Google engineer couldn’t protect her/his own location from the company. There is more here that's insane where they use non-google builds to try to not be tracked by their own company. /15 🤦🏼‍♂️ https://t.co/ce9quGyKAm

This wasn’t exactly a new problem as it was identified there were five different settings to configure how they mine device usage. /16 https://t.co/wmcVMSazSq

Amazing. According to the unsealed complaint, the senior product executive ***at Google*** and ***responsible for location services*** did not know how Google’s own location services interacted with each other. /17 https://t.co/PVwOkQXVTS 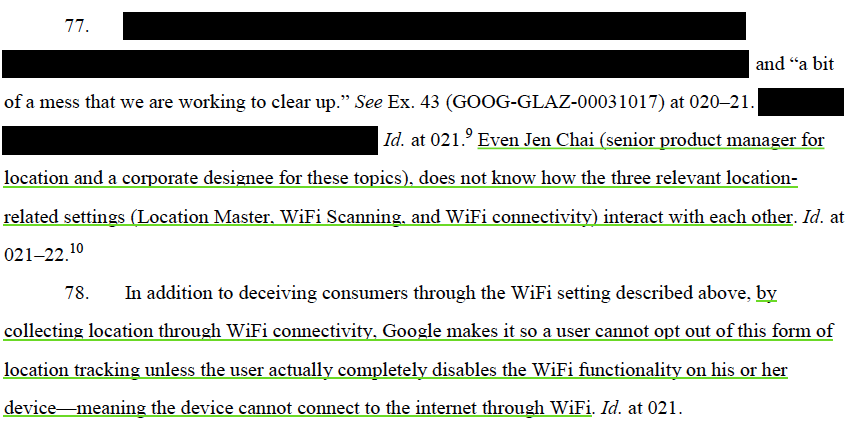 Google had clearly shifted its priorities over the years in how it treats location data. In the 2014-15 range, Google started collecting precise location data and then retreated in early 2019 sometime after the AP reported on their actual practices. Monopoly power. /18 https://t.co/vRqX6bgyXf

A lot of attention also on what is effectively a loophole that allows a company’s apps to continue to have the users’ location as long as they can get permission through at least one other owned app on the device. Google uses much-less powerful Uber as an example here... /19 https://t.co/T7qzI8Zf3M

however, this loophole becomes a real problem when applied to dominance (Google)…. their own employees recognized their “landmark privacy policy” was created in order to allow them to mine behaviors across their products (and sync their cookie data, too, IIRC)…/20 https://t.co/DeOKW8yxjG

This is all relevant to emerging legislative fixes for Google and Facebook. Data protection and competition policy are being integrated recognizing how duopoly leverages data across dominant products. See Australia, Germany, UK, EU, state AG suits, FTC, and DOJ lawsuits. /21

Also, it’s a good reminder how Google, similar to Facebook, uses its unparalleled legal and comms teams to suppress scrutiny. As background, @DCNorg filed with @newsalliance (hat tip) to have these docs unsealed nearly a year ago ...and they were just unsealed this week. /22 https://t.co/u1IS61RxWu 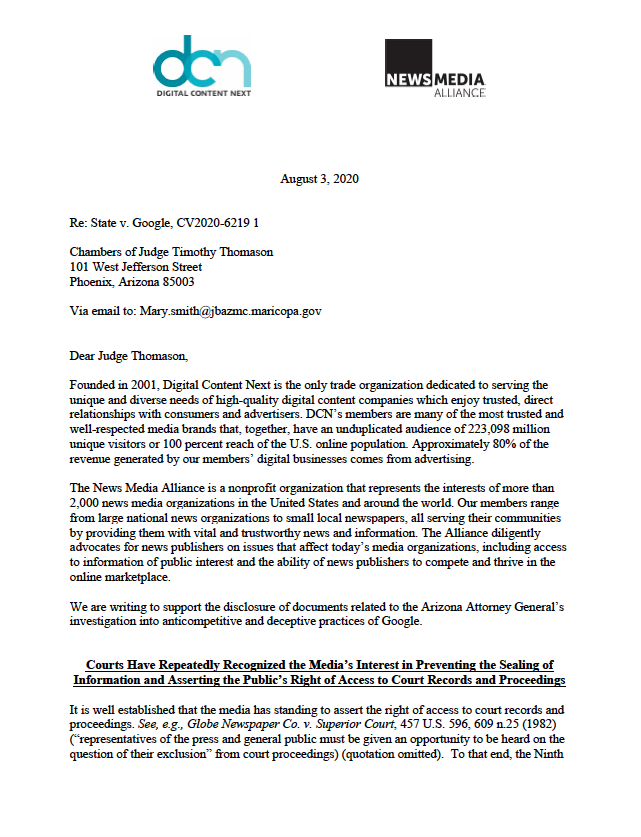 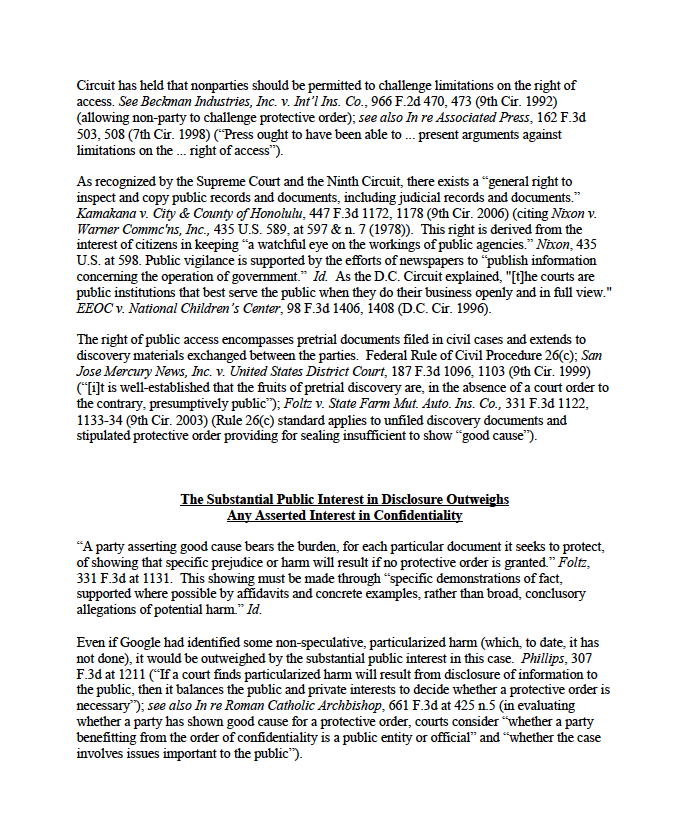 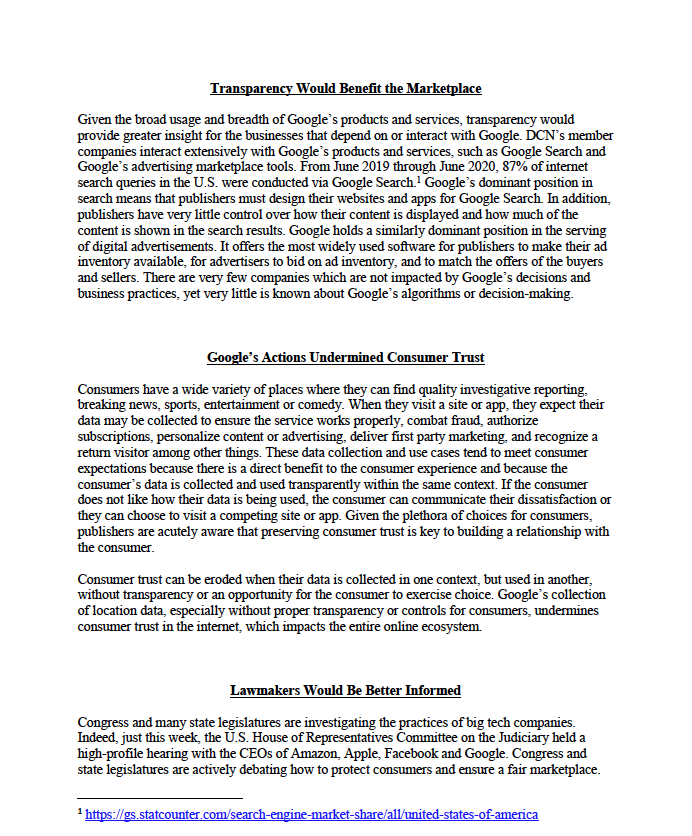 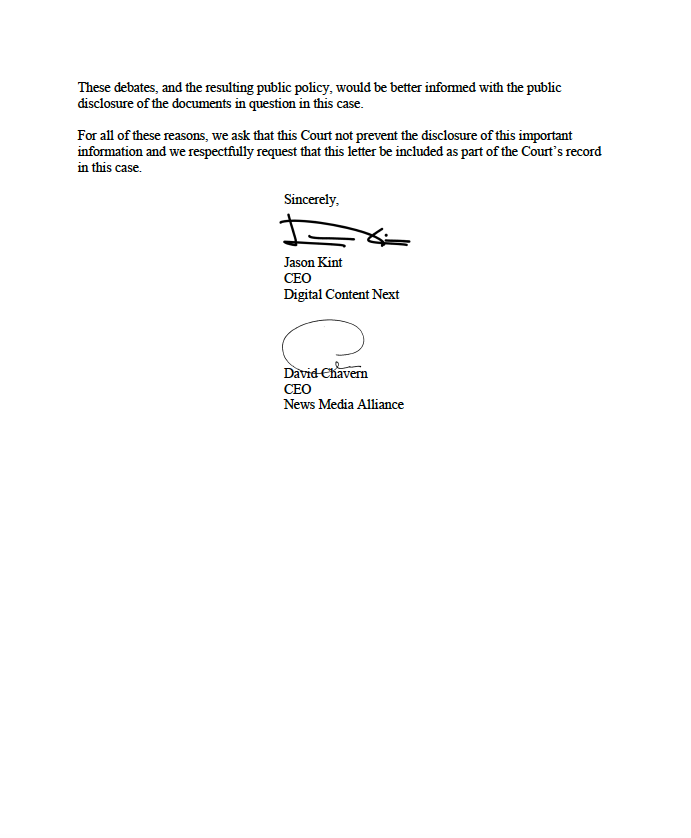 I have little doubt that after Judge signaled he would unseal docs, Google proactively tried to unseal the most attention grabbing but least legal risky parts of this lawsuit to muffle press. /23

Somewhere in the evidence (there are a ton of docs) they even acknowledge how Facebook’s Cambridge Analytica mess spiked the press attention in how it was handled.
Hence my thread, this also deserves attention. /24

Here is a thread from last year when we initially filed to tie some of this together. /25 https://t.co/NJLCdqPEfc

Here is the full set of docs from this week. Start with the refiled complaint at the top. Please reply here if I missed anything of significance or jump into my DMs. It takes a village. 🙏🏼 /26 https://t.co/eYd7g9zVne

ok, one more. this is literally a Google employee describing how he uses a fork of android in order to be "G-Free." IOW, please don't use our products at home if you want to avoid surveillance. /27 https://t.co/358rYXgoDG 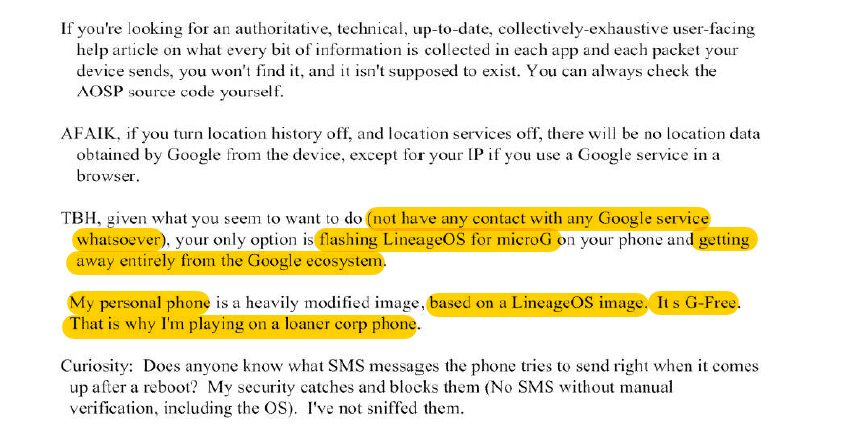 ok, that's all for now. I recognize it's a Friday of a holiday weekend but that's the way they roll. It took me a few days to get through everything. https://t.co/Xrh8S0l6m9 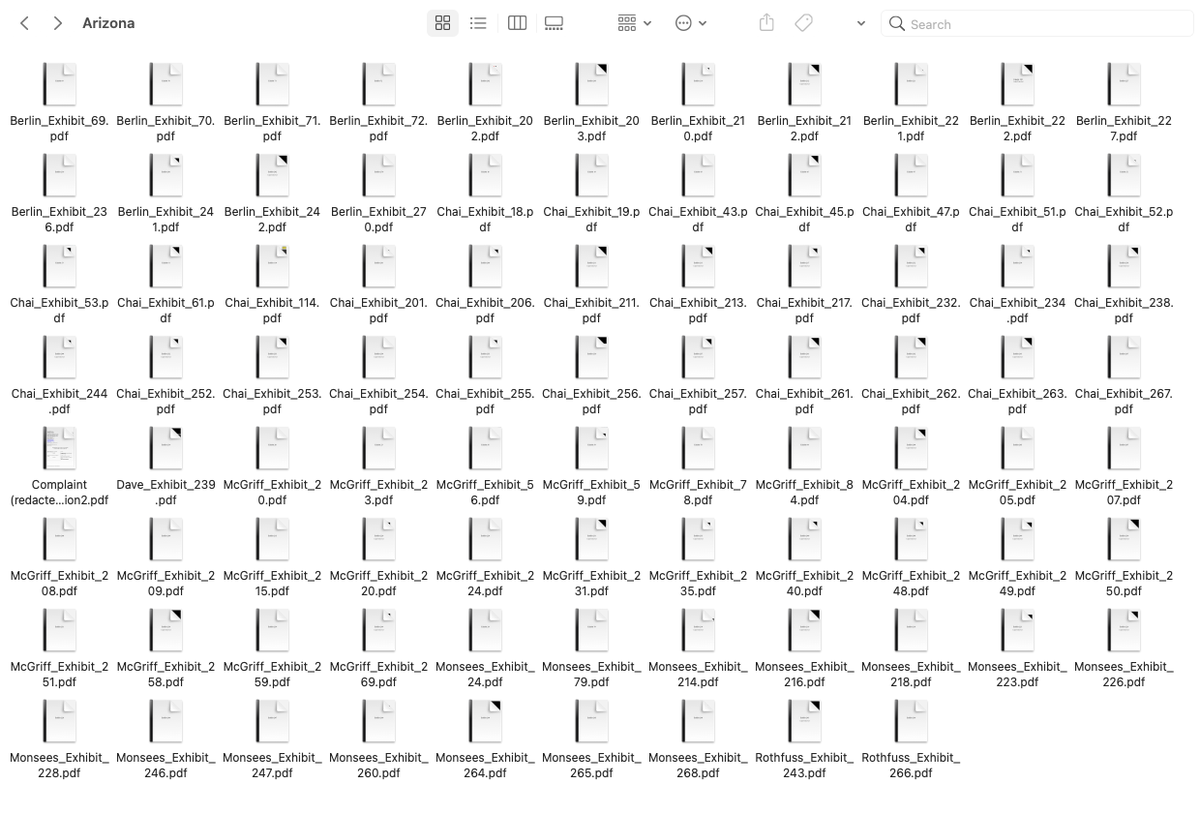