Today I'd like to talk about Rozman bin Jusoh, a Malaysian arrested in #Singapore in 1993. He was 22 years old.

On 24 November 1993, Rozman was approached by two men who later turned out to be an undercover officer from the Central Narcotics Bureau, and an agent-informant. The agent asked him if he had cannabis. He said no. The agent pressed him further, so he said, "We'll see tomorrow." https://t.co/eMaDHjKVj1

The next day, he met up with the undercover cop at a KFC, with a bag containing cannabis. When the cop went up to the counter to get a drink, Rozman followed, leaving the bag on the table unattended. The undercover cop gave the signal and CNB officers appeared to arrest Rozman. https://t.co/0ye7FAXIJA

The bag Rozman had contained 1040.8g of cannabis. CNB later also arrested another guy who'd been seen with Rozman. A search of his motorcycle came up w/ a bag w/ 943.3g of cannabis. This triggered the presumption in S17 of the Misuse of Drugs Act. 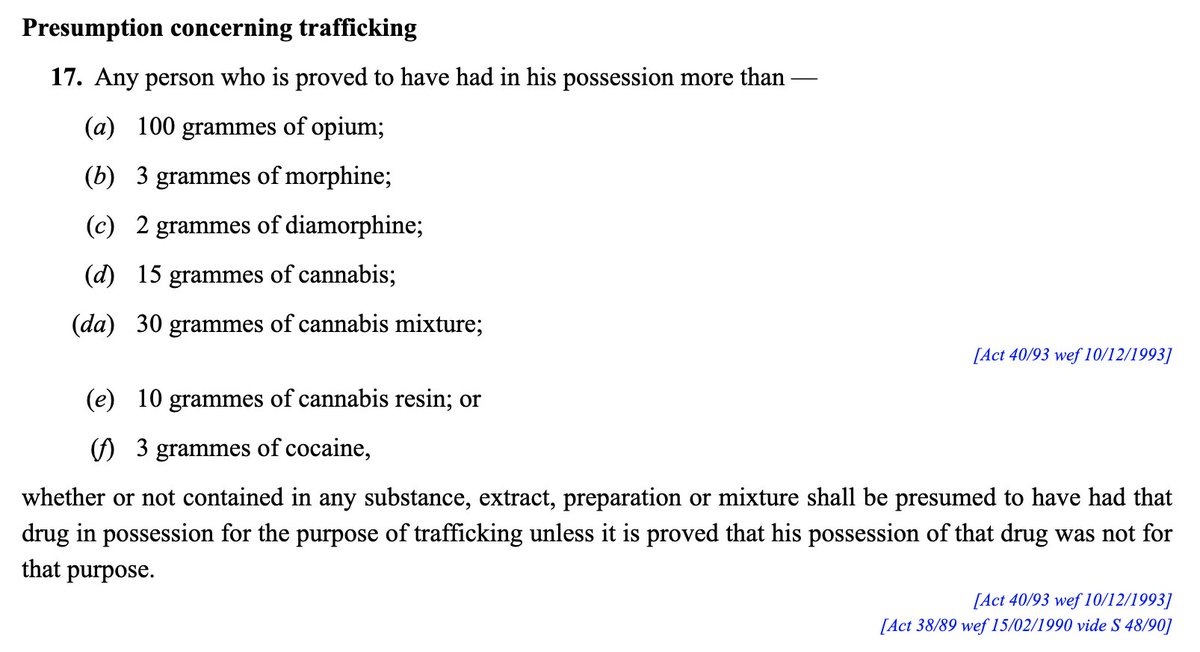 Rozman, from #Kelantan in #Malaysia, only spoke Malay. During the trial, the certified interpreter who'd translated for him when he gave statements to the police brought up the observation that Rozman "could not even answer simple questions", such as how many siblings he had. https://t.co/Y4EQBhFETd

This was a revelation that only came up as the interpreter gave evidence — the issue of Rozman's mental capacity/IQ hadn't originally been part of his defence. But because of what the interpreter said, the prosecution applied for Rozman to undergo a psychiatric examination.

Rozman was assessed by a government psychologist from the prisons department. He was not a clinical psychologist. He administered one non-verbal test w/ no sub-tests. He had no clinical notes, only a brief report saying Rozman wasn't mentally subnormal and knew right from wrong. https://t.co/0L3mqdwP92

The defence got a private clinical psychologist to examine him. She administered tests and found that his IQ was a borderline 74. She also said that he "could easily be misled and could get into difficulty" and "might not be able to discern right from wrong." https://t.co/1sBd2SkqYs

The trial judge also made his own observations of Rozman in the witness box: "he often looked plainly confused, sometimes even by straightforward questions."

"...my perception was that the first accused was a
guileless simpleton without any gift for contrivance." https://t.co/4J5eFdqdrO

The trial judge also found that the undercover officer and agent had "undertaken a substantially active role in persuading the first accused to sell them drugs" and that Rozman would not have done this "if not for his feeble mind which seemed to have been overborne" by the CNB. https://t.co/PA6aVsnMPy

The judge felt that, given Rozman's intellectual disability, it would be unsafe to convict him of trafficking, which carries the *mandatory* #deathpenalty (ie. if found guilty, the judge would have no choice but sentence him to death). He found him guilty of possession instead. https://t.co/PULRGlPjS2

The prosecution appealed the case. In 1995, the Court of Appeal overturned the trial judge's decision and convicted Rozman of drug trafficking.

He was therefore sentenced to the mandatory #deathpenalty.

The Court of Appeal said that the reasons the trial judge had pointed to could only be considered as mitigating factors when considering punishment. But since the law stated that the #deathpenalty was mandatory, "such considerations would only be relevant elsewhere." https://t.co/A4zPVsid5Q

The Court of Appeal stated that, even if Rozman really did have a borderline IQ, it wasn't enough to be a defence. They said the psychologist's opinion that he might not have been able to discern right from wrong was "inconclusive" and "neither here nor there". https://t.co/Ve4OpUXyed

(In writing this thread, I have relied on the High Court and Court of Appeal judgments, which are unfortunately not publicly available. @tocsg ran an article in 2010: https://t.co/iZjFHfBA8U)

If you're a Singaporean who wishes for the #deathpenalty to be abolished, you can register your position by signing this petition here: https://t.co/2W98NdBkHk

For ease of reference I've also collated Tochi and Rozman's stories in this Moment: https://t.co/wS1U2l5VDB