This article is harrowing to read: it describes the abuse and torture inflicted on a young domestic worker from Myanmar by her Singaporean employer. Piang Ngaih Don died in July 2016; her employer pleaded guilty to 28 charges, including culpable homicide. https://t.co/HzsM3agnbb

Piang Ngaih Don's story is told in this documentary by @LianainFilms: https://t.co/j3E50wD9Qs She was a single mother who left her little boy with her sister in her village when she came to Singapore.

While working for Gaiyathiri Murugayan's family in Singapore, Piang Ngaih Don was not allowed a mobile phone and did not have any days off.

The abuse and torture might have been exceptionally cruel, but this deprivation of days off and restrictions on devices is not uncommon.

The Ministry of Manpower said Piang Ngaih Don's employment agent spoke to her twice during her first 6 months, but didn't pick up any issues. She also passed her medical exam after 6 months, and saw the same doctor again later, but nothing was flagged. https://t.co/nOzERRODoq

The Ministry of Manpower also said that it's reviewing the reporting system for doctors who conduct these six-monthly medical exams. The doctor had seen bruises on Piang Ngaih Don, but her employer claimed it was because she fell frequently. https://t.co/f06LmXblgu https://t.co/EdPnrzfzao

The Ministry of Manpower has also said that they are going to "intensify" efforts to interview domestic workers about their well-being, and to review measures like the blacklisting of bad employers. https://t.co/VmlDhzdNNP https://t.co/kNq4M5jsZd

But these measures won't be enough if we don't address the severe power imbalance. @home_migrantssg's statement makes important recommendations, such as allowing domestic workers to live out, and guaranteeing rest days. https://t.co/4l867edKF0

This is a horrifying case and will trigger calls for harsh punishments for the perpetrators. But as @home_migrantssg points out, enforcement and punishment only come in after the fact, *after* abuse has been endured. There needs to be pre-emptive measures to protect workers.

If anyone would like to donate money to Phiang Ngaih Don's family, @home_migrantssg can transfer the funds to them on your behalf. Details here 👇🏼 https://t.co/B7lUGoDrGQ 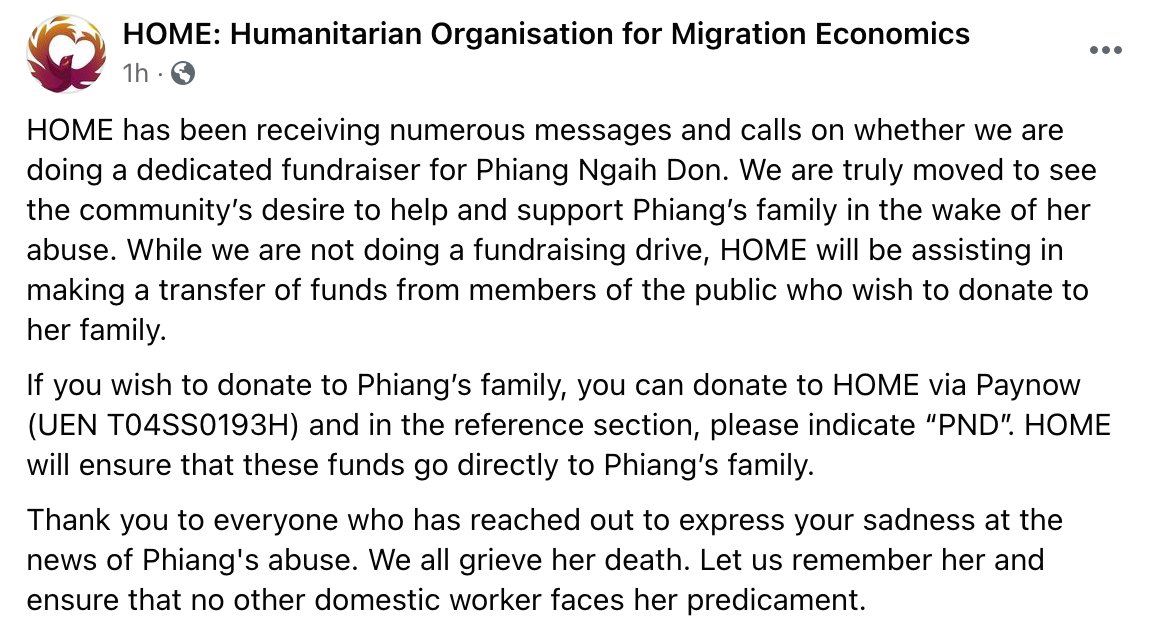 There are lots of policies/processes that need to be reviewed, but what urgently needs to be reviewed (yet doesn't seem to be mentioned) is how our policies infantilise domestic workers, deprive them of agency, and leave them at the mercy of their employers.

Even though they're adults, the relationship that domestic workers are forced to have with their employers is one that none of the us would want to have with our employers.

In 2014, I met a domestic worker who was 38 years old and still couldn't discharge herself from hospital without her employer's authorisation. She'd been ill-treated by this employer and didn't want to go home with them. https://t.co/vtNRcAMY5E

Singapore has legislation that says workers should have a weekly day off, but allows employers to pay workers in lieu of this day off. The idea is that if a worker wants to give up their rest day to earn some extra money, they should be able to do that. But...

...this doesn't take power dynamics into account. Employers can pay workers a token sum and say that the worker agreed to this arrangement to give up their day off. Many workers have debts to pay and families to support—will they dare to say no to their employers?