I haven't been able to find the actual text of the Foreign Interference (Countermeasures) Bill yet, but the Ministry of Home Affairs has put out a press release with some info about how the proposed law is supposed to work.

FICA is ostensibly meant to address foreign meddling through hostile information campaigns. Like POFMA, FICA will give the government the power to issue directions.

Not yet clear how the bill will define whether a Singaporean is an "agent of a foreign principal". https://t.co/vih2AcmoWs

These directions can include Technical Assistance Directions, which will require social media platforms, internet access services, or admins of social media/websites, to give information to the authorities for investigations into whether there's a "foreign principal" behind it.

Other directions have to do with stopping communications or blocking content from end users in Singapore. "Relevant electronic services" includes chat apps and search engines. https://t.co/hpQsGT6DmC

There's also the App Removal Direction, which can stop apps from being downloaded in Singapore, if those apps are known to be used by foreign principals to conduct hostile information campaigns.

(Again, not yet clear how they are going to define/determine such things.)

FICA will also allow the government to issue Disgorgement Directions, which will order individuals/locally registered entities who have published "harmful online content" (defined how?) to return $/material support to either the "foreign principal" or to the authorities.

Apart from hostile information campaigns, FICA will also zero in on "Politically Significant Persons". This includes political parties, political office holders, MPs, NCMPs, NMPs, the Leader of the House and the Leader of the Opposition, plus election candidates and their agents.

But FICA will also allow authorities appointed by the Minister for Home Affairs to *designate* groups or individuals who don't fall into the above-mentioned categories as "Politically Significant Persons". Additional requirements can be imposed on these people/groups. https://t.co/0TlXiQjfT3 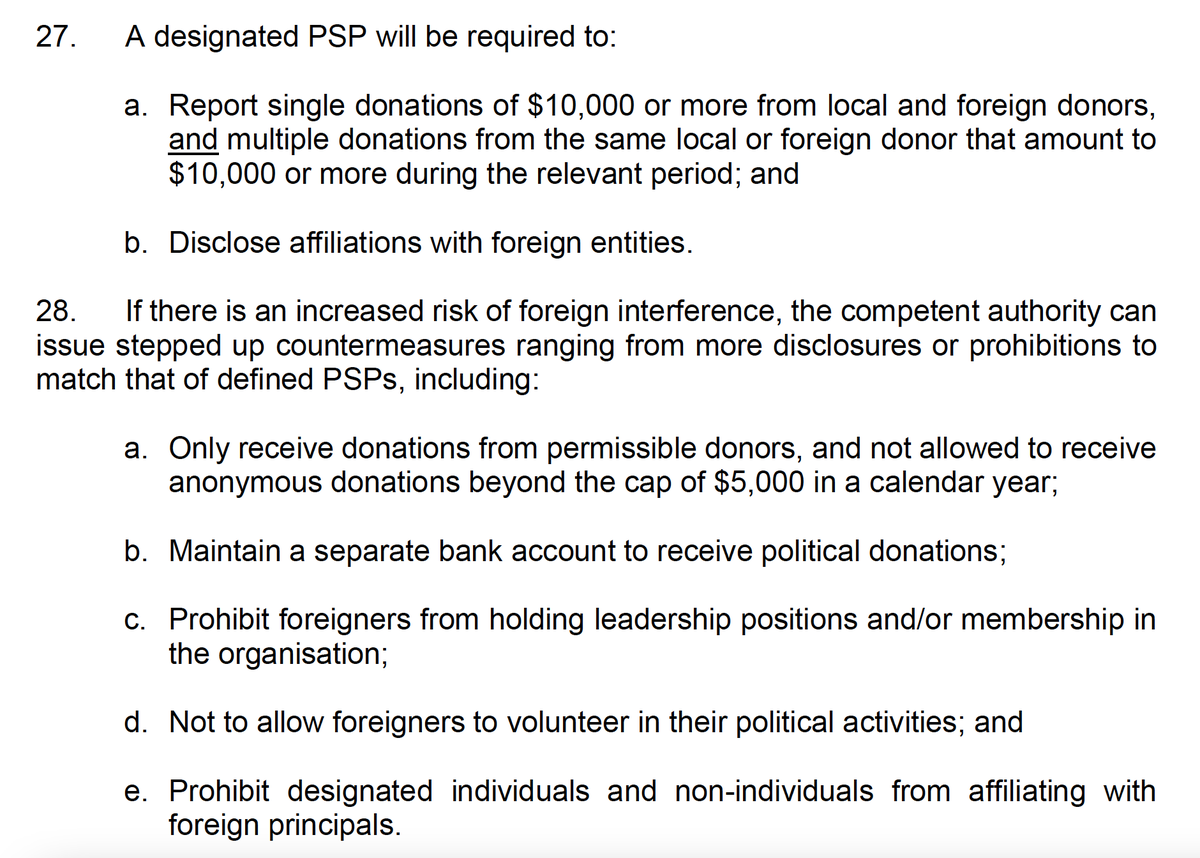 Unhappy about being designated a "Politically Significant Person"? You can appeal the decision to the authorities who made the designation in the first place, or to the Minister who gave them that power. No mention of being able to challenge this in court. https://t.co/Sm21vGCHYI

In fact, the press release says that appeals against directions related to alleged hostile information campaigns *will not* be heard in open court. There will be a tribunal chaired by a High Court judge + two persons outside of the government. https://t.co/AokhO6gAEU

As mentioned, I haven't seen the actual text of the bill yet (it'll hopefully be made available online soon), so there are lots of gaps that need to be filled in with regard to details and definitions.