59 years ago today, 2 buses left Washington DC for New Orleans. The trip was supposed to take 13 days, but the heroes on that bus would reveal racism, show what a REAL ally looks like and eventually expose one of the most racist conspiracies in history. (A thread)

There are a lot of misconceptions about the Freedom Rides.

First of all, the Freedom Rides didn't really change any laws. Segregation on public transportation was outlawed by the Supreme Court in Morgan v. Virginia & Boynton v. Virginia (Virginia was about that segregation life)

States, cities and the U.S. in general weren't just ENFORCING the laws because — for the most part — the US didn't give a damn about black people. And it wasn't just the SOUTH.

Secondly, it was a brilliant strategic move because the Freedom Riders weren't just black people.

They were divided into groups.

1 interracial couple sitting together
1 black person sitting up front in the whites only section
Others scattered throughout the bus
1 person sitting in back abiding by the white supremacist segregation rules.

They would lock people up for "disturbing the peace" and other made-up rules.

But they couldn't argue that if a black and white couple were willingly sitting together.

Plus, nothing makes a racist madder than seeing a white & Black unity. I don't know if you know this, but "once you go black...

(I think that's in the racism bible.)

The person stationed in the back abiding to the rules was supposed to call the Congress of Racial Equality in case the shit hit the fan.

(Back then, 86% of fans were involved in shit-hitting episodes)

For instance, when the 1st bus arrived in Anniston, Ala., policemen had organized a welcoming committee for the Freedom Riders...

With the Ku Klux Klan.

Klansmen threw a Molotov cocktail on the bus, and when the Freedom riders ran out, a mob of local white people was waiting

They attacked the Freedom Riders, forcing some to be hospitalized. Then the mob waited outside the hospital.

But then a superhero did some G shit.

First, you should know the man who I believe was the blackest, bravest civil rights hero of all time — Rev. Fred Shuttlesworth

Fred Shuttlesworth was a bad motherfucker.

When MLK wrote the infamous "Letter from a Birmingham Jail," Shuttlesworth was his cellmate.

He helped organize the March on Washington, the Children's Crusade & the Selma March

When MLK negotiated a truce with Birmingham’s white segregationists. Shuttlesworth wrote King from his hospital bed because he had been hit with the full force of a fire hose.

“Go ahead and call it off … When I see it on TV, that you have called it off, I will get up out of this, my sickbed with what little ounce of strength I have, and lead them back into the street. And your name’ll be Mud."

Fred wasn't with that bullshit.

So when Fred heard about the attack on the Freedom Riders, he pulled up.

No, I'm not using current slang.

He left Birmingham and LITERALLY pulled up to the hospital with an ARMED CONVOY of foot soldiers led by a black Army colonel and dared the white mob to do something.

To be fair, it was easy to detect the racist whites because they were dressed in their Sunday best because they had just come from church....

It was Mothers Day. Fred protected the bus along the way to the next stop in Birmingham, where the cops & KKK were once again waiting.

The same thing happend when they arrived in Montgomery. The police didn't do anything. The State Troopers couldn't stop the white mob.

It was so bad that the president of the United States, JFK, had to call in the National Guard.

Then they headed for Jackson, Mississippi

By now there were three buses of Freedom Riders. Now, in Mississippi, they were arrested, but the white mob didn't beat them because there was a powerful group protecting them that even the KKK didn't mess with:

They raised the money to get 300 ppl out of jail.

And when the Freedom Riders were released, the black women had clothes, toiletries, places to bathe, food.

There are no reports about it, but I am willing to bet that Mississippi macaroni and Cheese was SLAMMING.

JFK asked CORE to cool off for the rest of the summer because it was getting too dangerous but CORE's response could be summed up by one word:

Then something crazy happened.

All across the country, people started forming their own version of Freedom Rides. They boarded buses. They sat down in segregated restaurants. They protested.

Now everyone knows that John Lewis was a Freedom Rider. (Or you should know... I keep forgetting about that American History doesn't teach shit black history except for MLK and Harriet Tubman)

When they were imprisoned in Mississippi, he was the one who kept up morale. After the Freedom Rides, he went BACK to Mississippi to register voters. In 1964, he joined Fannie Lou Hamer and tried to get the Mississippi Freedom Democratic Party seated at the Democratic Convention

They failed. So the guy went to Alabama.

When he was in Alabama, he hooked up with John Lewis and Shuttlesworth to organize the Selma to Montgomery marches where police attacked and beat up protesters.

Finally, this guy was tired of white liberals and police

So he moved to Alabama's black belt and started registering voters. He called his group the Lowndes County Freedom Organization and he noticed that black people in Lowndes County all carried guns for self defense.

The LCFO eventually merged with the Democratic Party

By the time they won countywide offices, the guy had already left to become Chairman of the SNCC. But when he left, people had already started using one of his morale-building phases:

Another group had even gotten his permission to use the mascot he created to counterbalance the Democratic Party's rooster logo: 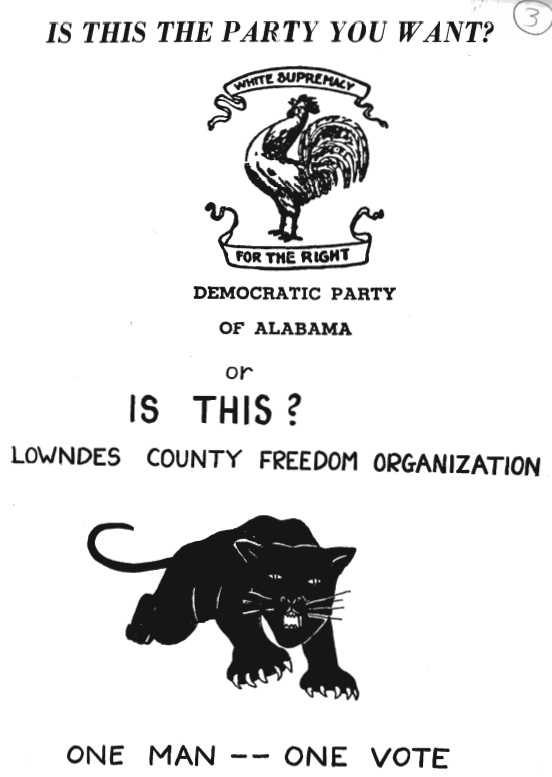 His name was Stokely Carmichael.

But let's get back to the Freedom Rides.

The Freedom Riders weren't just Black. There were white people, too, including a guy named John C. Raines.

Raines was a minister who was asked to join the Freedom Rides. He even met Stokely Carmichael

Aside from racism, Carmichael was vehemently opposed to the Vietnam War. He had a lot of influence on Raines, as did someone else who was a part of the Black Power movement, Fred Hampton.

Raines eventually became a professor. He HATED Vietnam and racism.

He always wondered how the white supremacists knew about the Freedom Riders. Carmichael and Hampton always said the FBI was involved, which sounds like a crazy conspiracy theory.

So John Raines did something.

In 1971, on the night of the big Muhammad Ali vs. Joe Frazier "Fight of the Century," Raines, his wife and their friends broke into an FBI office in Reading, Pa.

They stole a bunch of FBI documents and released them to the press.

In those documents was the entire COINTELPRO plan to stop black activists from uniting. We often mention that they tried to convince MLK to commit suicide, and planned Hampton's murder but rarely mention the person J. Edgar Hoover said the "necessary charisma to be a real threat" https://t.co/e9lVxUxH5J 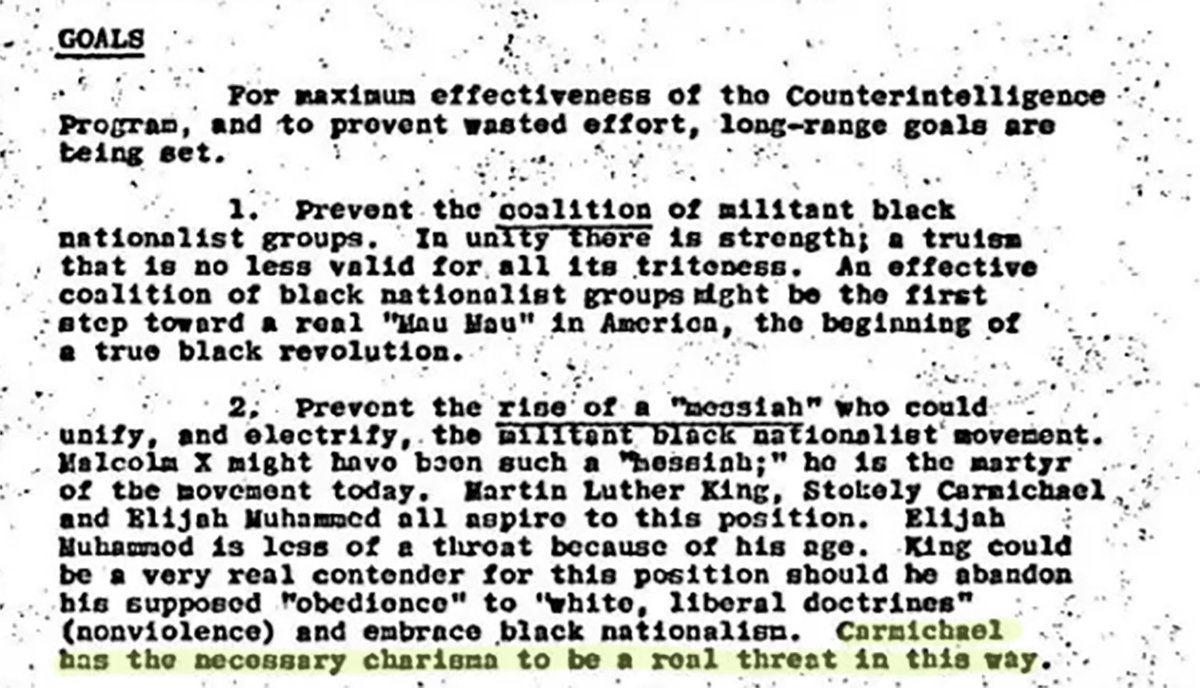 Raines group was NEVER discovered until they told their story a few years ago. But there is another story that is not talked about a lot.

When Carmichael organized the Selma to Montgomery march, a white woman named Viola Luizzo saw the violence decided to help.

She drove down to the second march and helped with First Aid. And after the Selma concert, she drove activists to the airport.

That's when a group of Klansmen saw her with a 19-year-old black man in the car and opened fire, killing her.

One of the killers was an FBI informant

It turns out the informant, Gary Rowe, was also involved with the 16th St. Baptist Church bombing. He had also planted a bomb in MLK's hotel room. He later told Congress that the FBI knew about these killings and had FED the KKK information on Luizzo.

But Rowe's FIRST "job" with the FBI was collaborating on the Freedom Rides. He worked with the police and the KKK to plan the attack in Anniston.

But here's where it gets more interesting. This is NOT ABOUT HISTORY

See, Rowe and the KKK arranged that attack with Bull Connor, who was ostensibly Birmingham's Police Commissioner. While Connor gets most of the credit, the city was ruled by a triumvirate of Segregationists:

They were the ones who set up the attack on the Freedom Riders, which was revealed by COINTELPRO.

Now, why is this important if it happened so long ago?

Well, many people wonder why Alabama is so racist.

Here is where history gets real close

Shuttlesworth even sued that Segregation Triumverate in federal court about racism in in Birmingham.

Connor, Waggoner and Hanes were so racist that they sued the NY Times for libel for saying they "stood watch" while the KKK attacked black people in the city

They made it illegal for school districts to comply with federal authorities to desegregate schools. The reapportioned districts. They found ways to violate the Voting Rights Act and the Civil Rights Act

One state representative was enthusiastic about all the segregation laws

He introduced the "Papers Please" law and wrote one of the first bills in the country to protect Confederate Statues...

That guy is still one of the most powerful politicians in Ala. even though he's not a state Rep. anymore.

His dad was in politics, too.

His dad worked with a man named Bob Chambliss. Chambliss was a mechanic with the city when the senator's dad started his career.

And his son is the oldest, most powerful State Senator in Alabama, Jabo Waggoner. https://t.co/e4BFkhAu6H 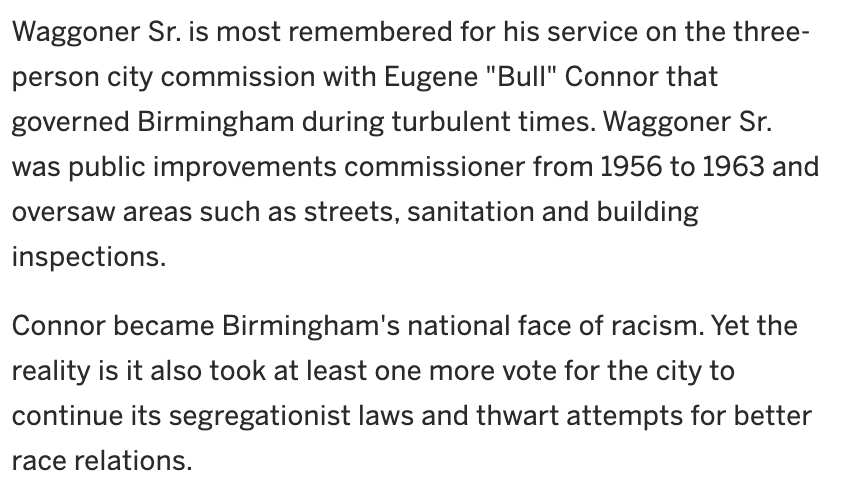 Jabo is the son of J.T. Waggoner, whose administration planned the KKK attack on the Freedom Riders.

Whose administration collaborated with the man who killed Violla Luizzo.

But, of course, that doesn't mean that "Jabo" holds his father's ideals. After all, he was just a tiny, little boy when the Freedom Rides happened.

Jabo was 24 when the Freedom rides happened. https://t.co/MUKcspLets 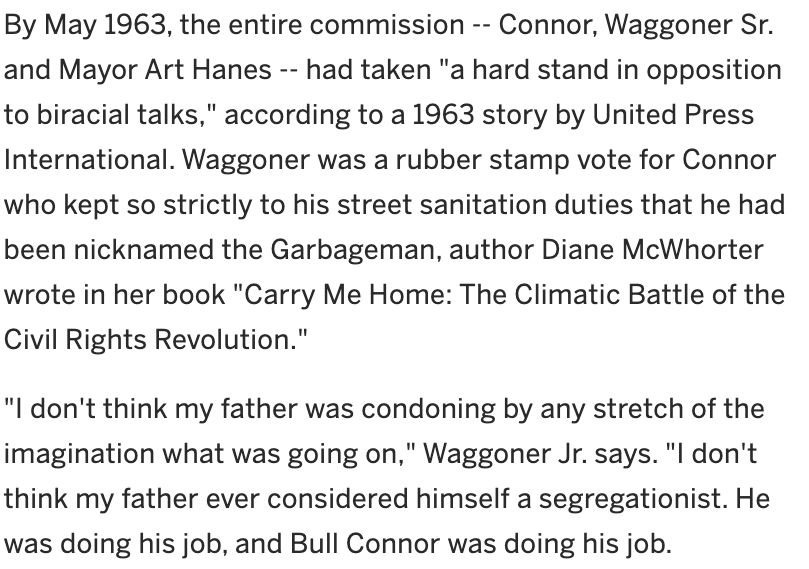 He was 26 during the bombing of the 16th St. Baptist Church,

He was 28 when Viola Luizzo was killed.

Of course, he could have disavowed his father's white supremacy. Maybe he's just a staunch conservative who isn't a white supremacist.