But I'm willing to believe you are right if you can disprove all of the facts. https://t.co/K8hbPcyPgu

First, let's get 3 things out of the way. 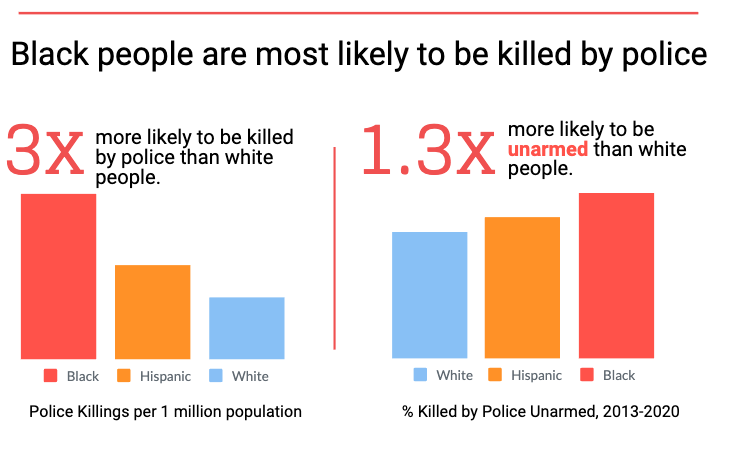 2. It has nothing to do with crime or violence

Most police killings occur during traffic stops, mental health wellness checks or a nonviolent offense. Plus the rate of police killings don't correlate to violent crime rates in 49 of 50 major cities. 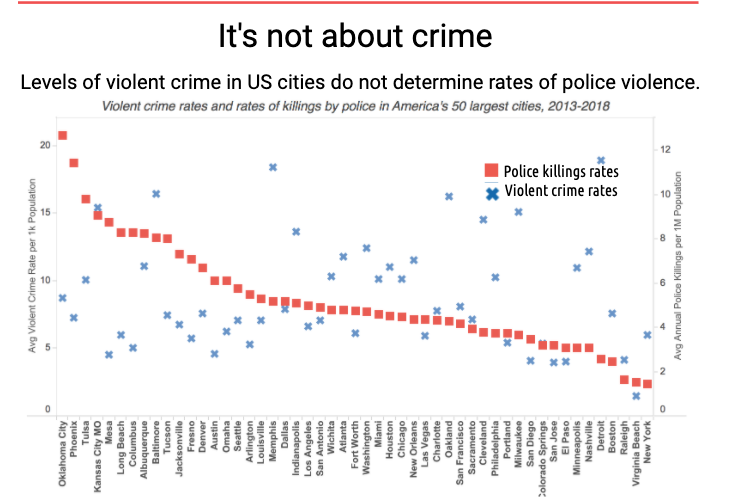 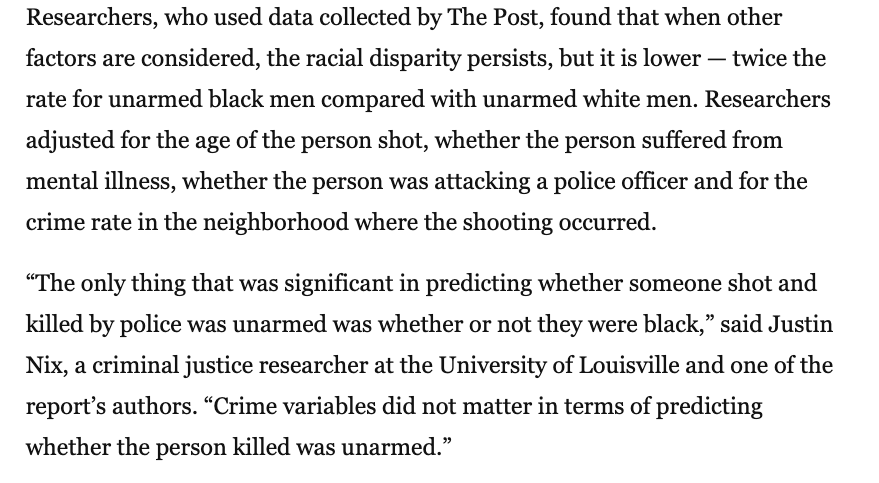 3. It has nothing to do with danger.

The rate of cops being murdered during a traffic stop assaulted is 1 in 65 million. Statistically, a cop would have to pull over 10 ppl every day for 100 years to even be in danger of being assaulted

OK, now let's get into it. First of all, there are only two major studies that show cops DON'T disproportionately kill Black people.

Both have been retracted or disproven

White people LOVE to cite Roland Fyer's paper that found no statistical bias in police shootings, which has been repeatedly laughed at by people who do math. But I won't get into the weeds except to say everyone but Roland Fryer thinks it is wrong

However, I will concede one point:

The research is out on whether police wake up in the morning with a gnawing need to kill a Black person. That's not how racism works. That's not even what Black people are alleging.

The issue is SYSTEMIC AND RACIST Let me show you:

First of all, white people use more drugs. That's a simple fact. And now that marijuana is being increasingly legalized, the disparities are growing. https://t.co/4vS5qRikBQ 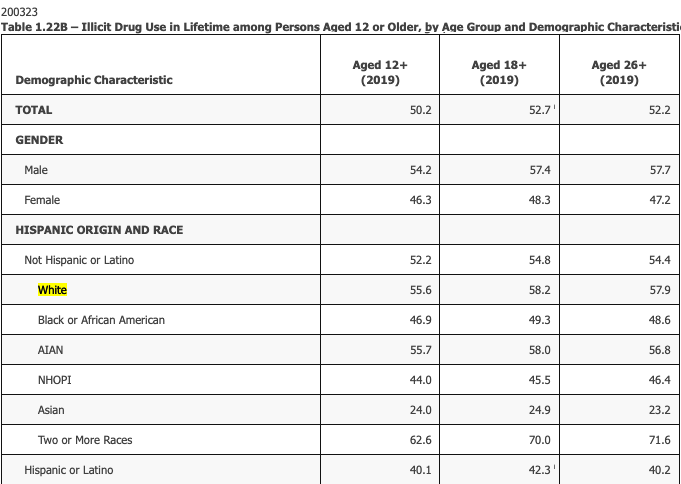 86% of drug arrests are for possession, yet Black people are jailed at 3 times the rate of whites. What does this have to do with police shootings?

I'll show you in a sec! Are you on coke or something?

Now, the Stanford policing Project shows that Black people are pulled over 20 percent more often than whites, they are searched at twice the rate of whites but, white people are MORE LIKELY TO HAVE CONTRABAND IN THE CAR.
https://t.co/j6qx4LknvH

And contrary to the BS you just made up to tweet, WHITE people are more likely to resist arrest

But when they do, they don't get shot. https://t.co/86qYpleztf

In fact, in one wide-ranging study of metadata, researchers found that that police are quicker to shoot Black targets, than white ones.

That's why I shop at Walmart. https://t.co/OZlKEo0IS2 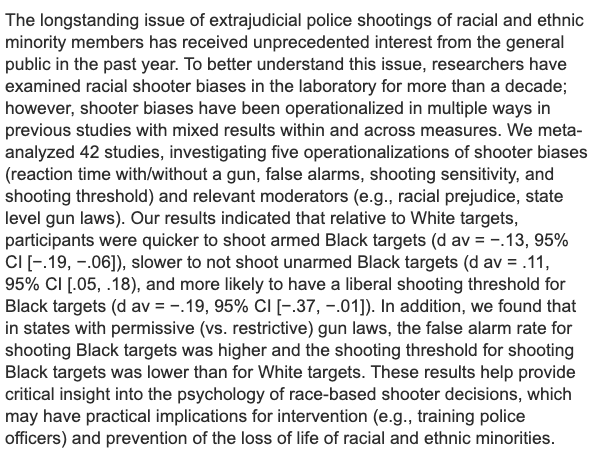 It has nothing to do with poverty. Black males who make less than $20,000 are the most-targeted group of people in America but guess who's next...the RICHEST Black men. In fact, the RICHEST, OLDEST Black men experience more force than POOREST white men.

And here is something crazy: The group who cops are more likely to curse at, THREATEN to shoot, or handcuff is THE RICHEST BLACK WOMEN!

I know it doesn't make any sense.

And most of these studies are ONLY for police shooting DEATHS. They don't count the people who survive https://t.co/ARu5fvXVUI 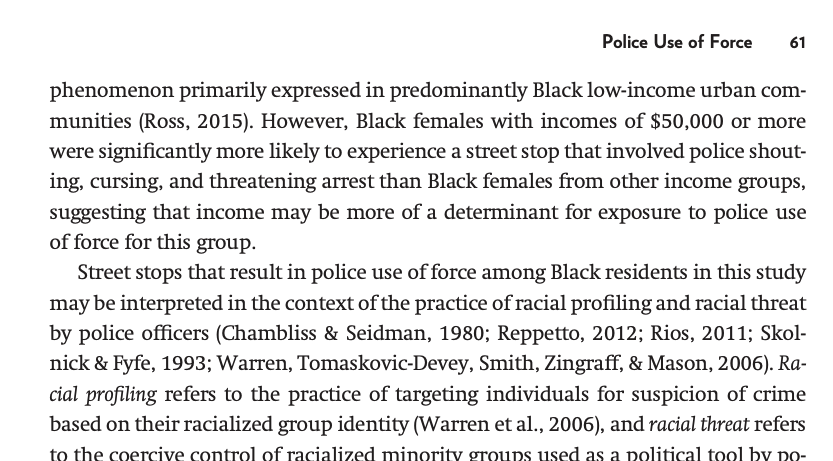 (Seriously, they don't count them). They also don't include beating and choking cases like Eric Garner or George Floyd.

But no one is saying cops are hunting Black people.

BUT COPS ARE HUNTING BLACK PEOPLE. Math is saying it. The research shows it. The science proves it.

There is literally no other explanation for it. Poplice shootings don't correlate to crime rates, income, drug use, violence, danger or any other factor. JUST RACE.

But, I'm willing to admit when I am wrong.

If ANY SINGLE HUMAN BEING ON THE PLANET can offer this much peer-reviewed scientific research that shows police shootings are NOT racially biased, I'll give you $5 and publicly admit I was wrong. (I would start a Gofundme but the money would just sit there)

So prove me wrong...