As the news broke on Wednesday that there was a riot at the U.S. Capitol, volunteer #Wikipedia editors worked to document what was happening. A thread about the fascinating process of breaking news editing: https://t.co/8FoCCphKVJ 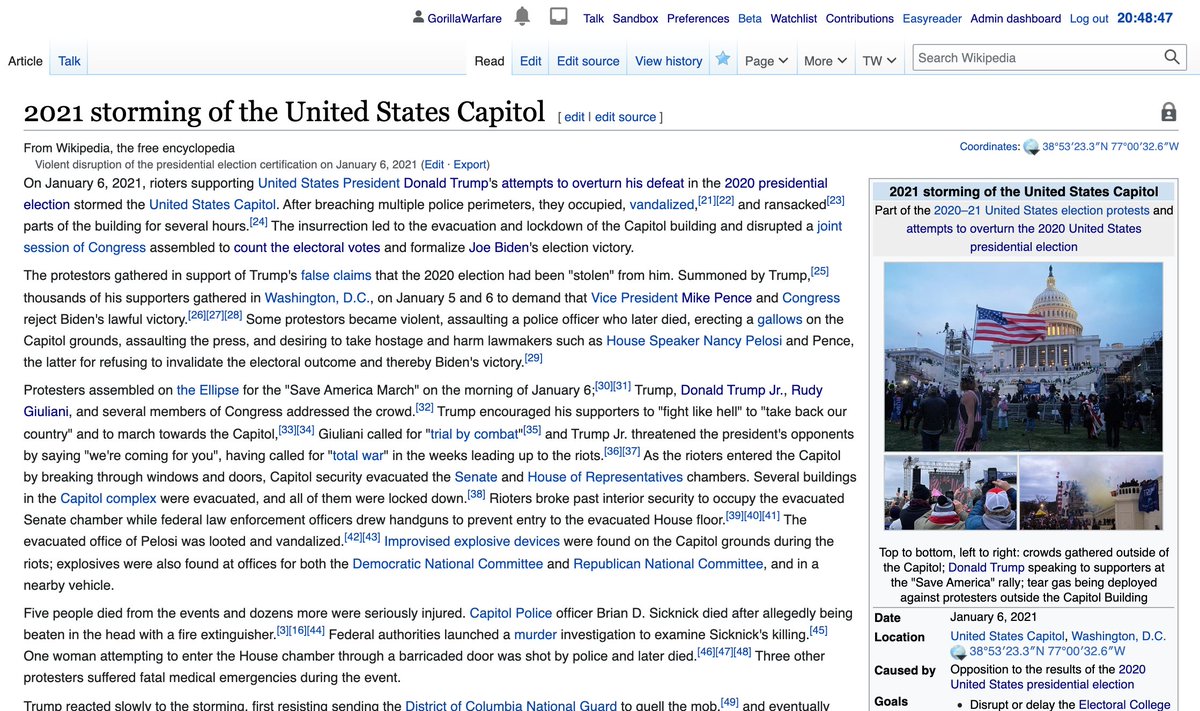 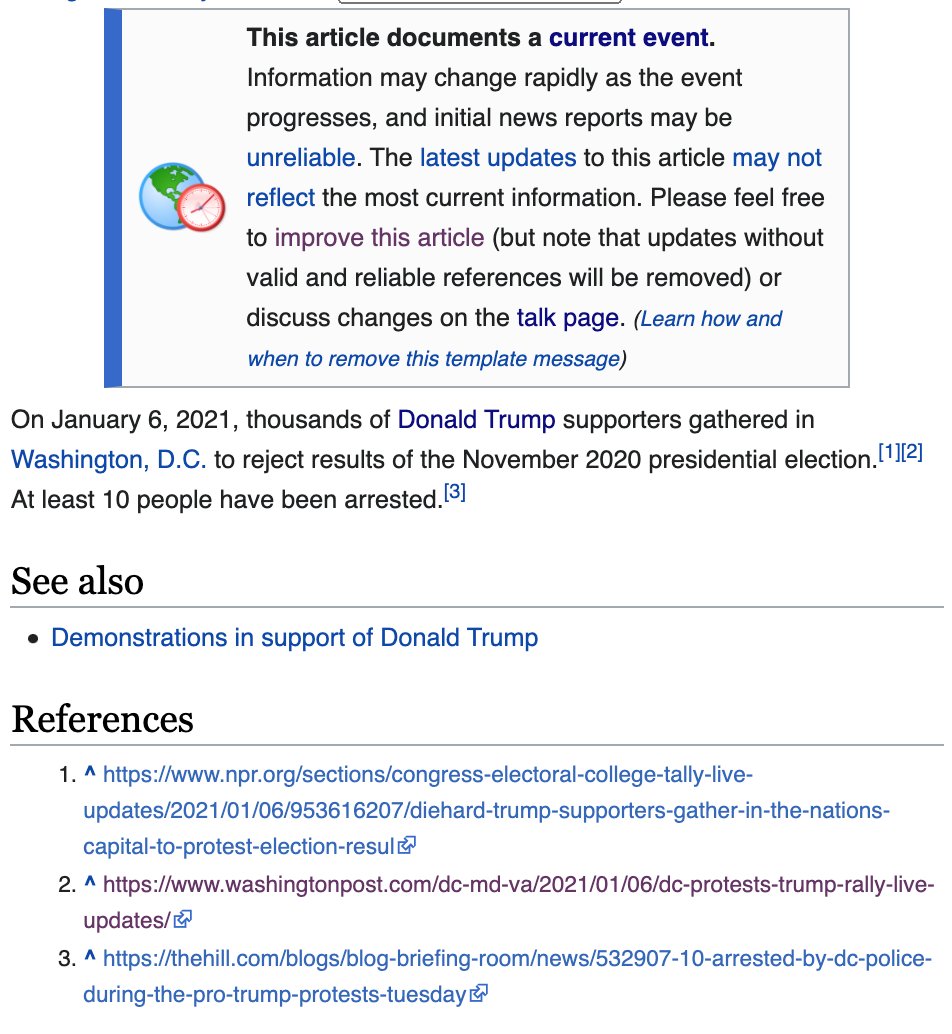 Shortly after 2 p.m. EST, protesters breached the Capitol building. The information was first introduced to the article at 2:33 p.m. EST, and at this point many editors began rapidly updating the page. https://t.co/Yvtzv75WwT

At the peak of editing, I would estimate there was an edit being saved every ten seconds—many more were unsuccessful due to "edit conflicts", which occur when two editors try to simultaneously save conflicting revisions.

By 3 p.m., articles about the event had already been created on the Arabic and Basque Wikipedias. They were followed soon after by Persian and Russian, then Simple English.

At 20:17 UTC (3:17 p.m. EST), an editor observed that the title was ambiguous (there had been other January 2021 Donald Trump rallies), and moved the page to a new title at "January 2021 United States Capitol protests".

Shortly after, the first of many, many discussions about what to title the page began, with many suggestions. Some suggested titles were "storming", "riots", and "insurrection".

More than 200 editors contributed in under twelve hours to a discussion about page titling, which closed at 08:00 UTC (3 a.m. EST) on January 7 with a decision to title the page "2021 storming of the United States Capitol".

People began looking for images to illustrate the article. The first, a photo of pro-Trump protesters outside of Union Station that was taken just before noon EST, was added to the article at 6:36 EST. https://t.co/CHA6RN0IJL https://t.co/qB1X8CtiAo 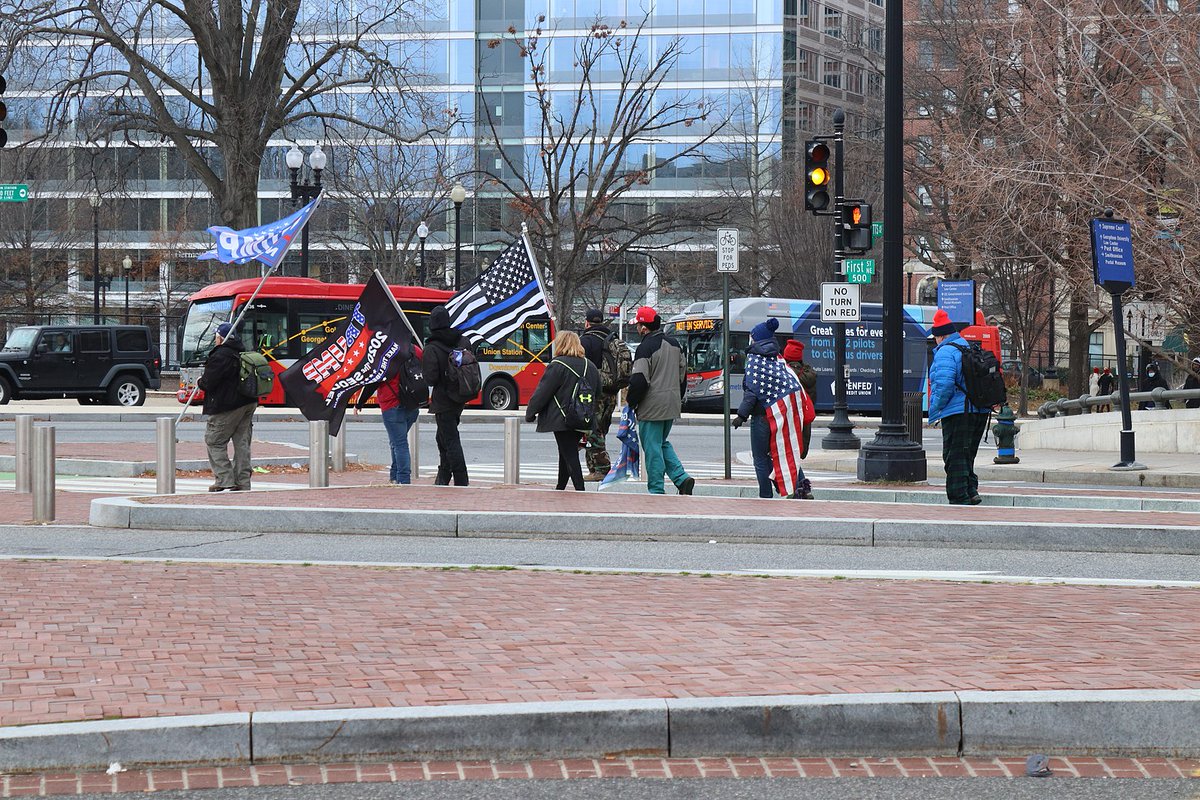 As of today, the article has been edited more than 4,500 times by almost 800 different people, who collaborated to create an article that is nearly 14,000 words long and cites 480+ sources. It's been viewed almost a million times.

That's only direct edits to the page. The talk page, where changes are suggested and consensus is achieved, has been edited more than 3,300 times by over 700 people. There are six pages of archived discussion.

The article has been translated into 47 languages, including the constructed language Esperanto and the auxiliary language Interlingua. There are also entries about the event on other Wikimedia projects including Wikinews and Wikiquote.

More than 500 freely-licensed images and videos have been uploaded to Wikimedia Commons. https://t.co/wgz8fi15ht

Editors have written related articles, including a timeline of events (https://t.co/U5pMnRmNFy) and an article about international reactions to the incident (https://t.co/dDFvvk0LLu)

It's amazing to watch an all-volunteer group of @Wikipedia editors, some who've edited for more than a decade and some editing for the first time, collaborate to create something like this: https://t.co/Hm2HtIks17

@Wikipedia And the work is hardly done. Discussions continue on the talk page (including more naming discussions), and the page itself has been edited more than 25 times in the past hour.

With the perspective that time brings and the emergence of more journalism and research about the events of January 6, the article will be updated to reflect the mark the insurrection has made on history.