A lot of people have asked me this week: Where did this ivermectin obsession come from? Who could possibly benefit from it?

Most importantly, why did my antivaxx aunt start eating horse goo from the tractor store?

It’s complicated, but here are some answers. https://t.co/fJZBjejN0N 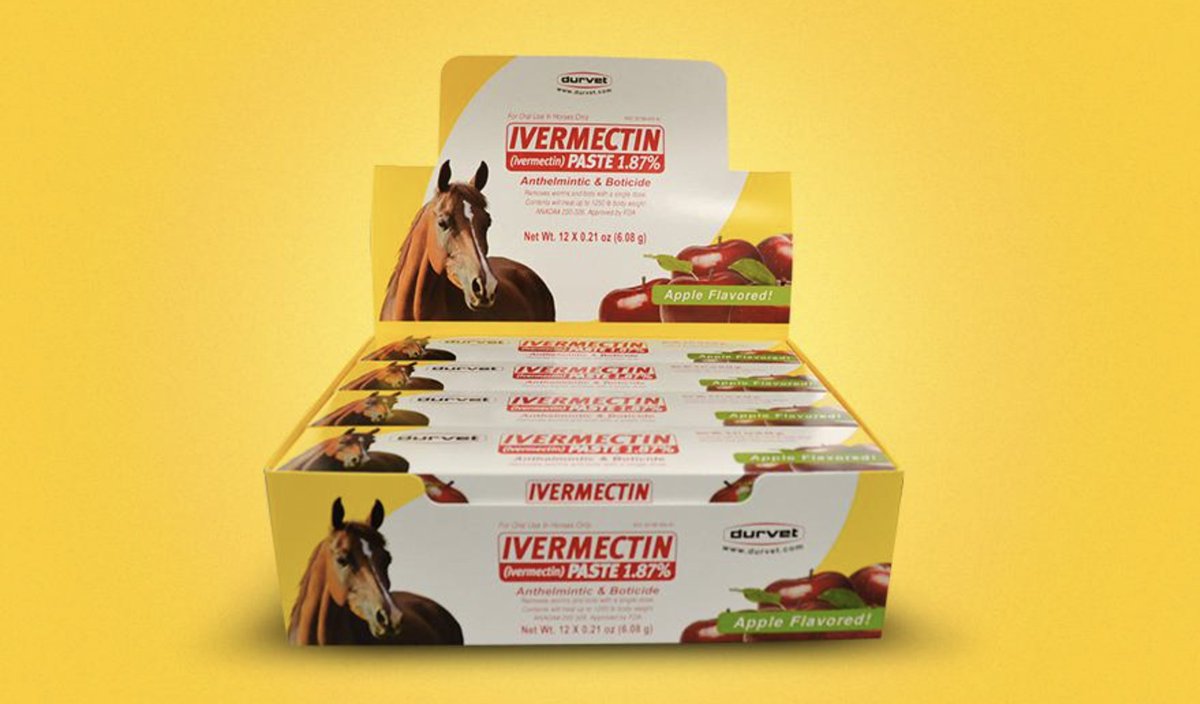 First off, they really are eating horse dewormer. It tastes terrible. Some mix it into jam to eat it on toast.

Others have asked about... more drastic actions. After all, they think ivermectin horse gel will their life, and their doctor won’t prescribe it.

How did we get here? https://t.co/uQBChLN3Lb

Let's flash back to last year.

Remember those pro-Trump doctors who had an extremely viral video that said hydroxychloroquine “cured” COVID-19?

Then-President Trump retweeted it. It had millions of views before it was pulled from Facebook.

That was America’s Frontline Doctors. https://t.co/LQcoeqgQhq 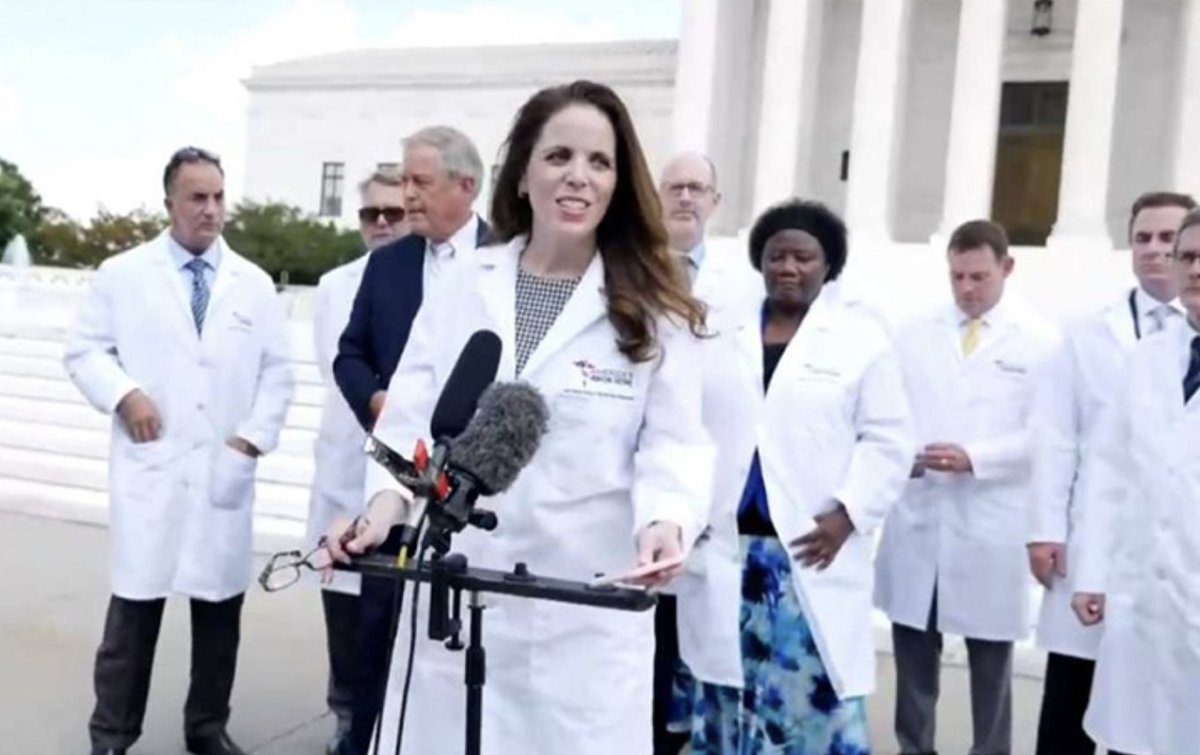 If you know America’s Frontline Doctors, it’s probably because of Dr. Stella Immanuel.

She became famous because, before claiming hydroxychloroquine cures COVID, she said ovarian cysts came from sex with demons.

She’s become wildly influential with antivaxxers in the process. She has over 300k followers on this website. https://t.co/drGmJFU2tG 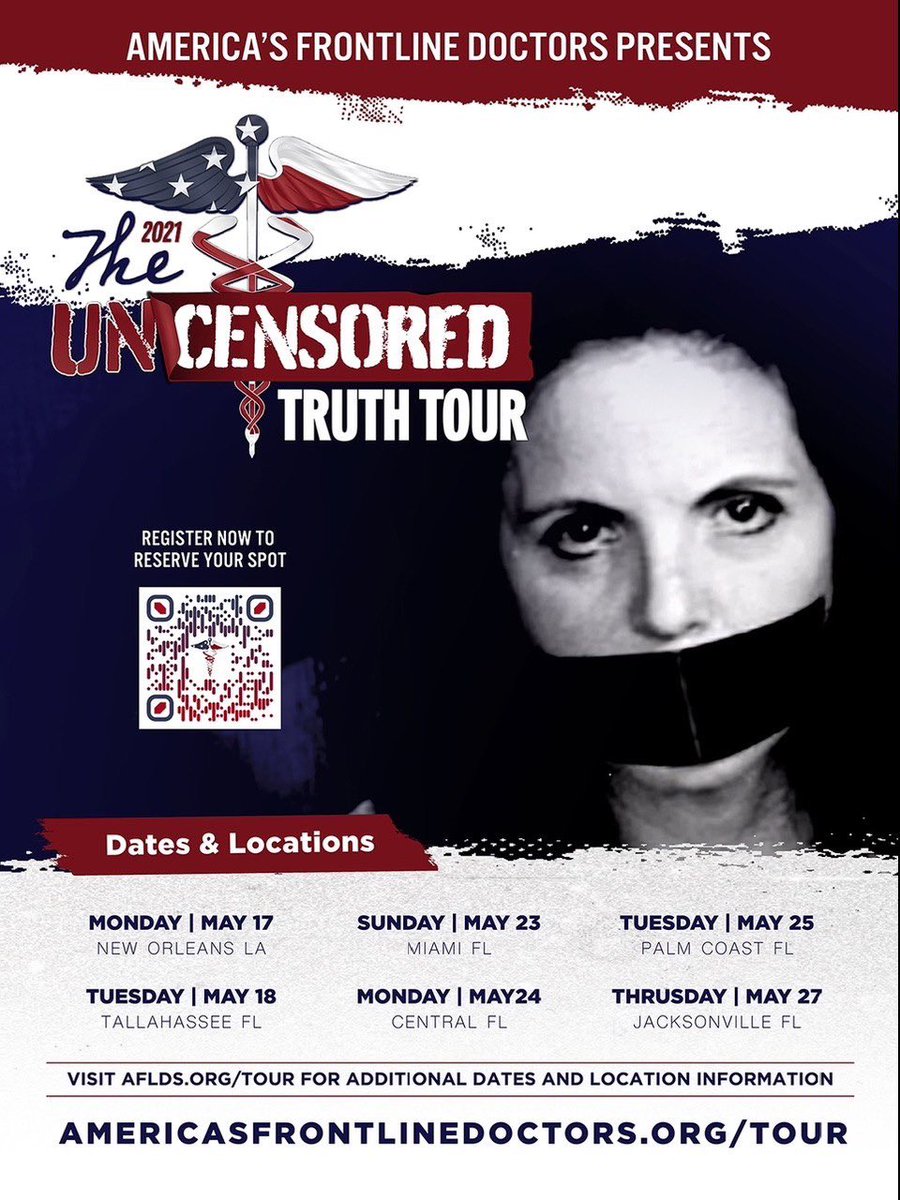 Members did whack-a-mole with telehealth providers, trying to get doctors to sign off on scripts.

But one reliably obliged: SpeakWithAnMD, who partners with… America’s Frontline Doctors. https://t.co/m2vfTH30Lc

The cost of the ivermectin or hydroxychloroquine isn’t included, but, conveniently, they partner with a pharmacy who will ship it to your door! https://t.co/539joeFnbW

We got a hold of the intake form for a SpeakWithAnMD doctor.

One part of the questionnaire asks: “What medication do you prefer?”

The user is then presented with three options: ivermectin, hydroxychloroquine, or not sure. https://t.co/8SkpWmRApB

Tthis got out of hand fast. SpeakWithAnMD now hits you with a prompt warning of long wait times due to "overwhelming demand."

Antivaxxers were worried about family members dying of COVID, and they were told ivermectin cured it.

They were getting really impatient.

This is how people started eating horse goo. https://t.co/0hpoaoKXjM 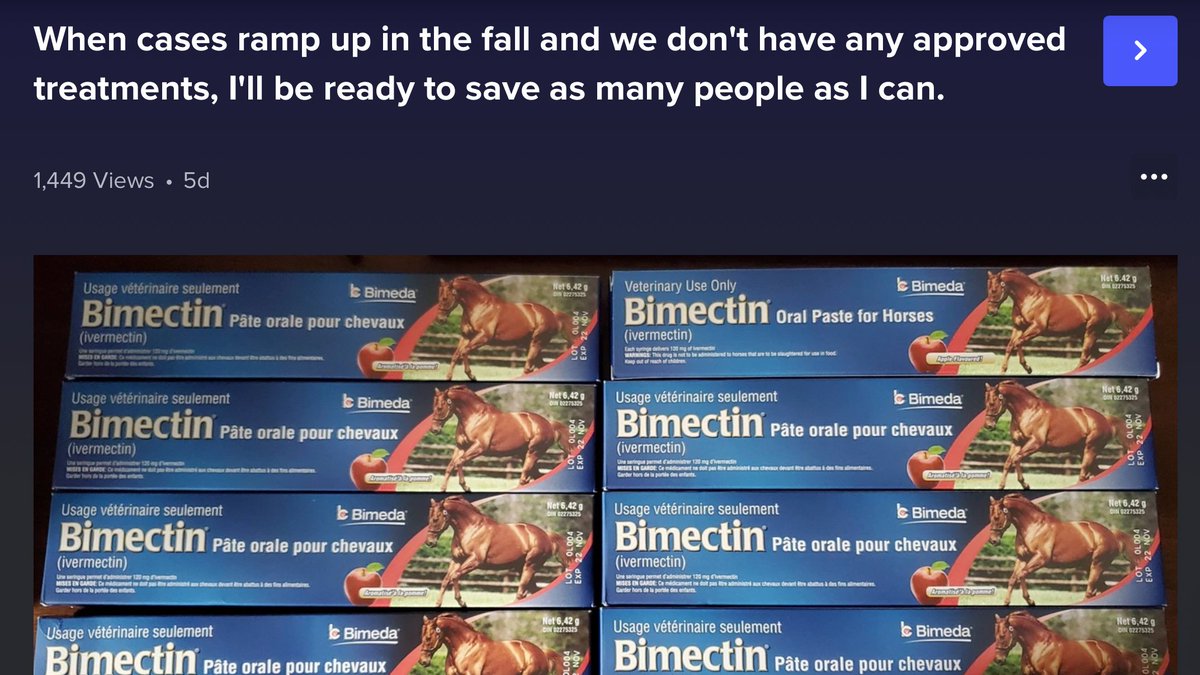 Antivaxxers started imploring each other to go to pet stores, claiming the horse and people Ivermectin are the same. They started sharing tips on how to eat the gel kind. They started hoarding it.

They started to wonder if maybe, without medical supervision, they had OD’d on it. https://t.co/lSXIF5ItXJ 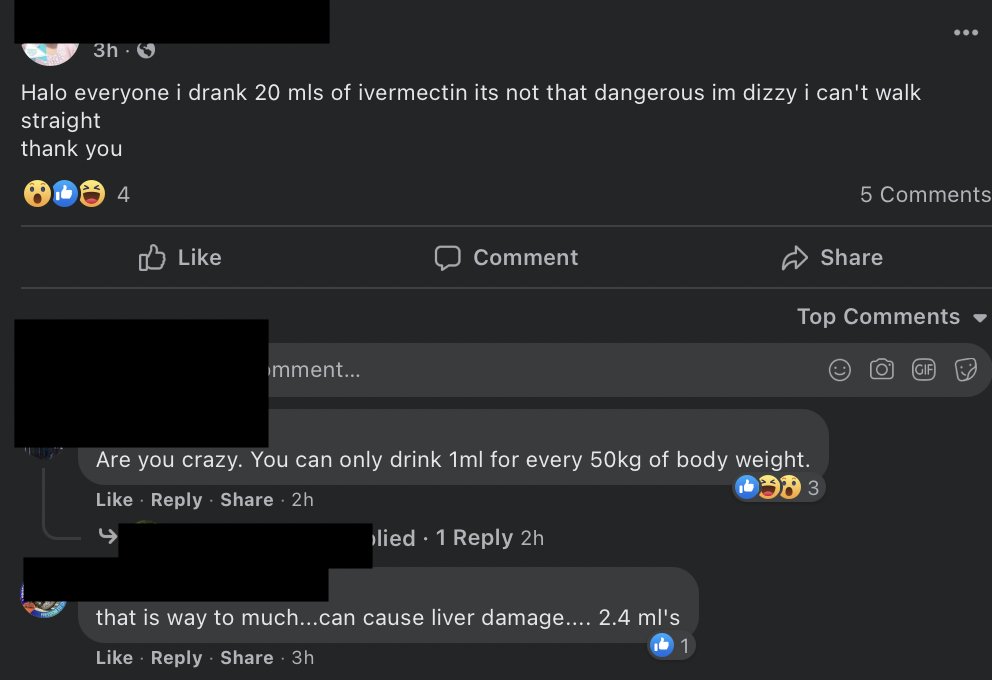 To evade what they believed to be incoming Facebook and Reddit bans, some ivermectin fans started to ask how much their “horse" weighs, so it didn’t look like they were giving out medical advice. https://t.co/2oPGDcL8uC 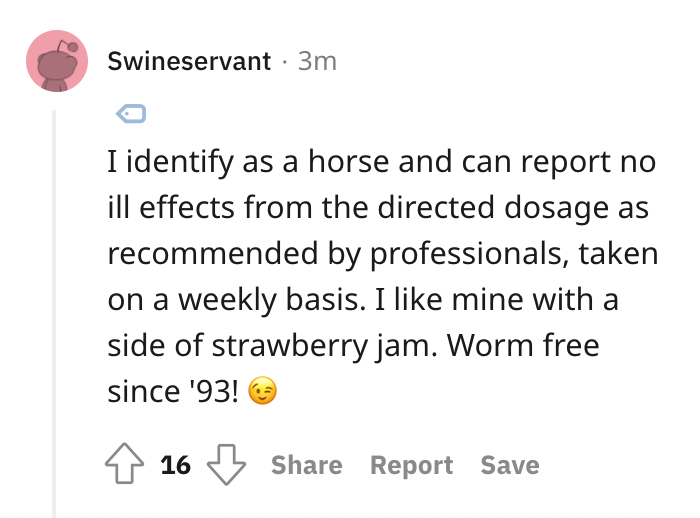 So that's how we ended up here.

Ivermectin fans on Facebook, complaining about wait times and high drug prices, got fed up with America’s Frontline Doctors, who sold them conspiracy and the fake cure.

So they went to the feed store, to eat the horse goo, because it's cheaper.

There is one final plot twist.

America’s Frontline Doctors founder Simone Gold was indicted and is awaiting trial... for her role in the Capitol Riot on January 6th.

Out on personal recognizance, she was on the speaker lineup for an antivaxx rally in LA on Saturday. https://t.co/KDk7UltXm7 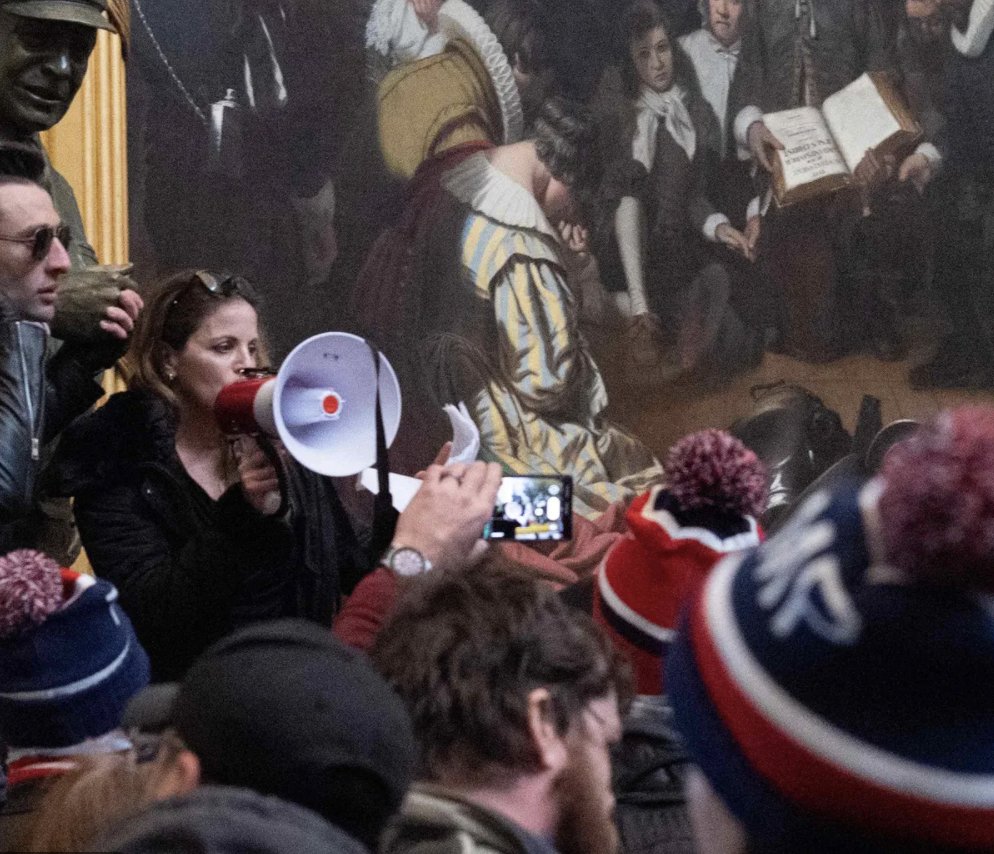