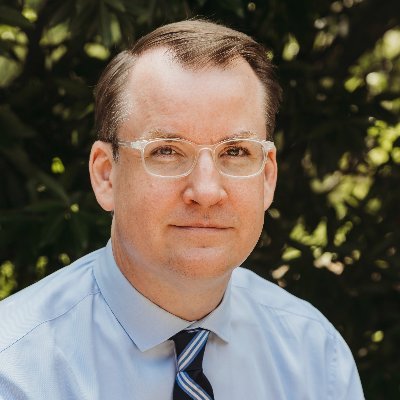 So the theory behind the movie is that the group True the Vote analyzed cell-phone geolocation data and found that thousands of people in swing states visited multiple ballot drop-box locations to cast handfuls of ballots.

Yes, of course cell phone geolocation data can be used to locate people. But there are caveats.

For example, Dinesh D'Souza and his allies like to compare the film's findings to the Capitol riot cases. But look at how the data are shown in a riot case.
https://www.justice.gov/usao-dc/case-multi-defendant/file/1458991/download https://t.co/BestS0mQH0 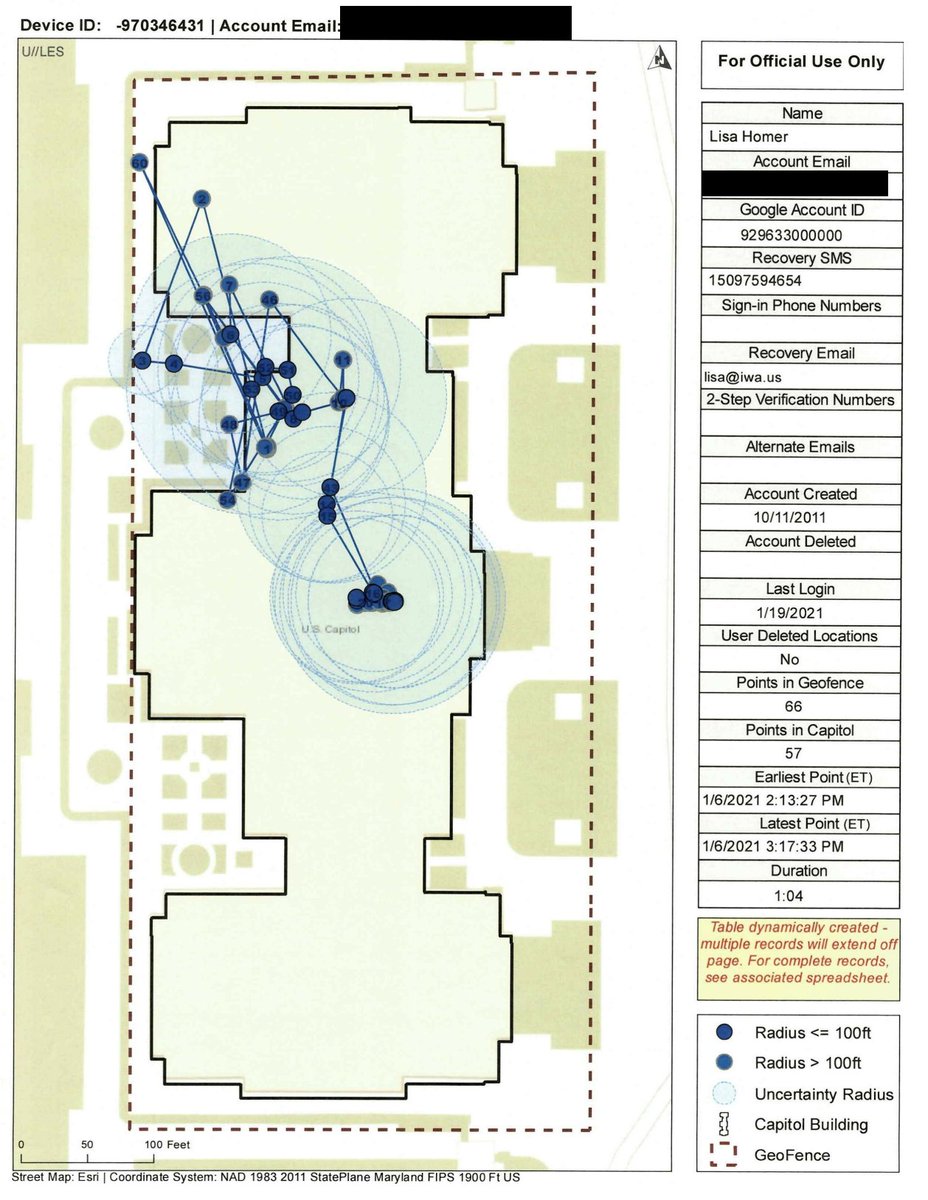 No one will be convicted of being in the Capitol if they have one ping inside the building with uncertainty extending outside.

When True the Vote presented data to the Georgia Bureau of Investigation, the GBI shrugged. After all, the allegation of rampant collection and submission of the ballots wasn't proven by the data, which supposedly indicated presence within *100 feet* of a drop box. https://t.co/kBpmWWkpBV 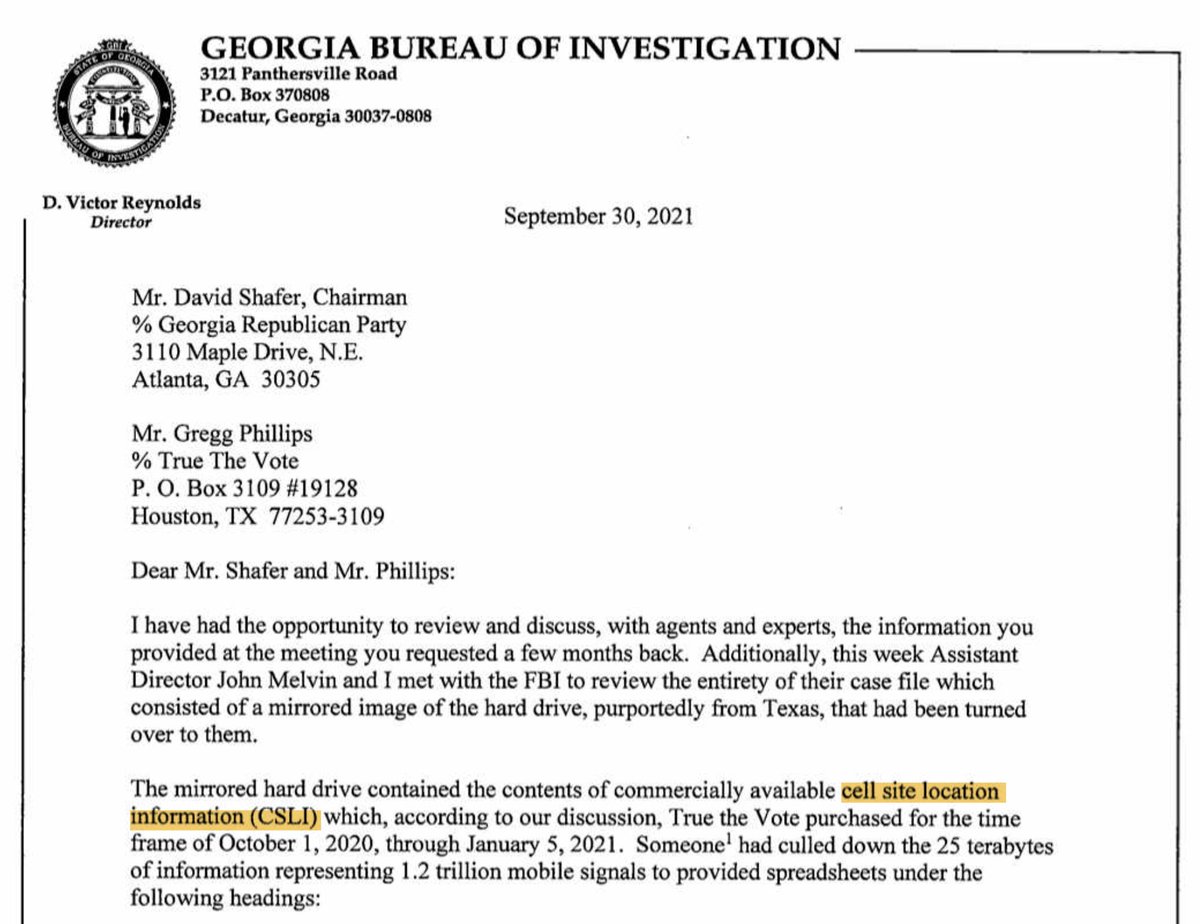 More important, though, is the highlight in the first image: the data used weren't GPS data! They were triangulations from cell-phone-tower connections, a less precise set of numbers.

True the Vote has been pretty assiduous about *not* showing the paths the "mules" (the people who supposedly stuffed ballot boxes) used. But they did submit some maps in Wisconsin earlier this year. Like this one. https://legis.wisconsin.gov/assembly/22/brandtjen/media/1560/5-combined-files-for-melodie.pdf https://t.co/UGORz2Npuf 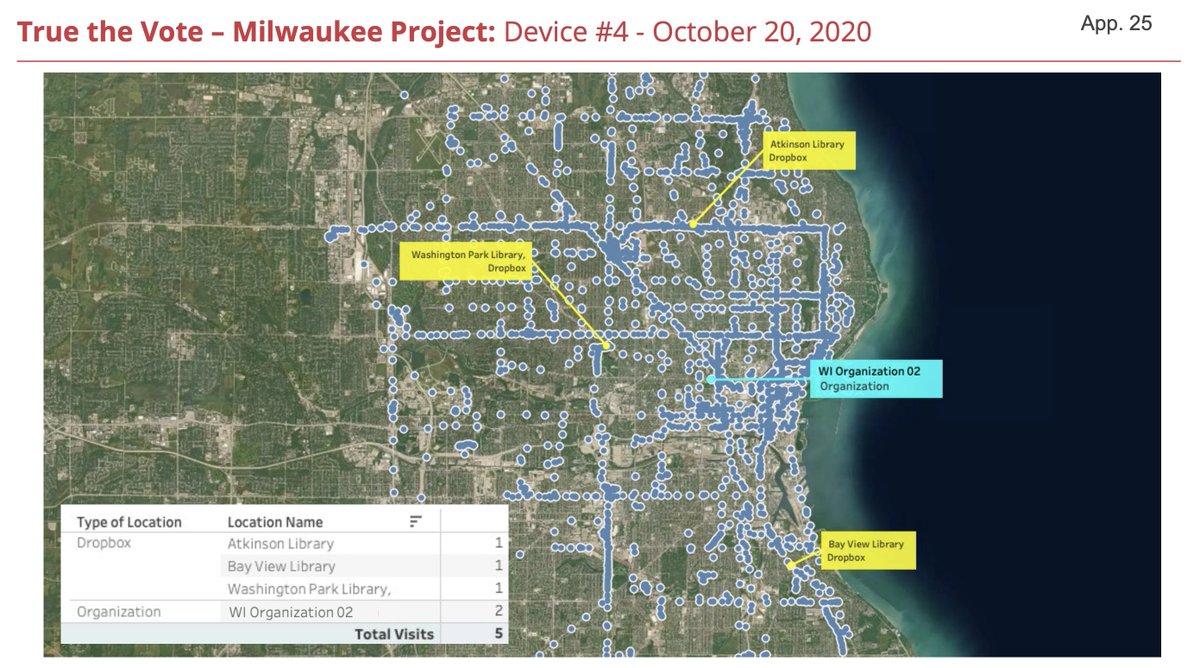 That's a purported mule! Notice how the dots (cell-phone pings) just generally overlap broadly with streets. There's nothing from this that people drove deliberately to the drop-box locations. They're just by the side of roads the person was driving on.

In the movie, there is one map shown (blue lines with orange drop-boxes). But when I overlaid real drop-box locations on top of it (white lines, circles) you see that they don't overlap. Gregg Phillips of True the Vote later admitted the map was fake. https://www.washingtonpost.com/politics/2022/05/19/even-geolocation-maps-2000-mules-are-misleading/ https://t.co/mtv4SZu9kh 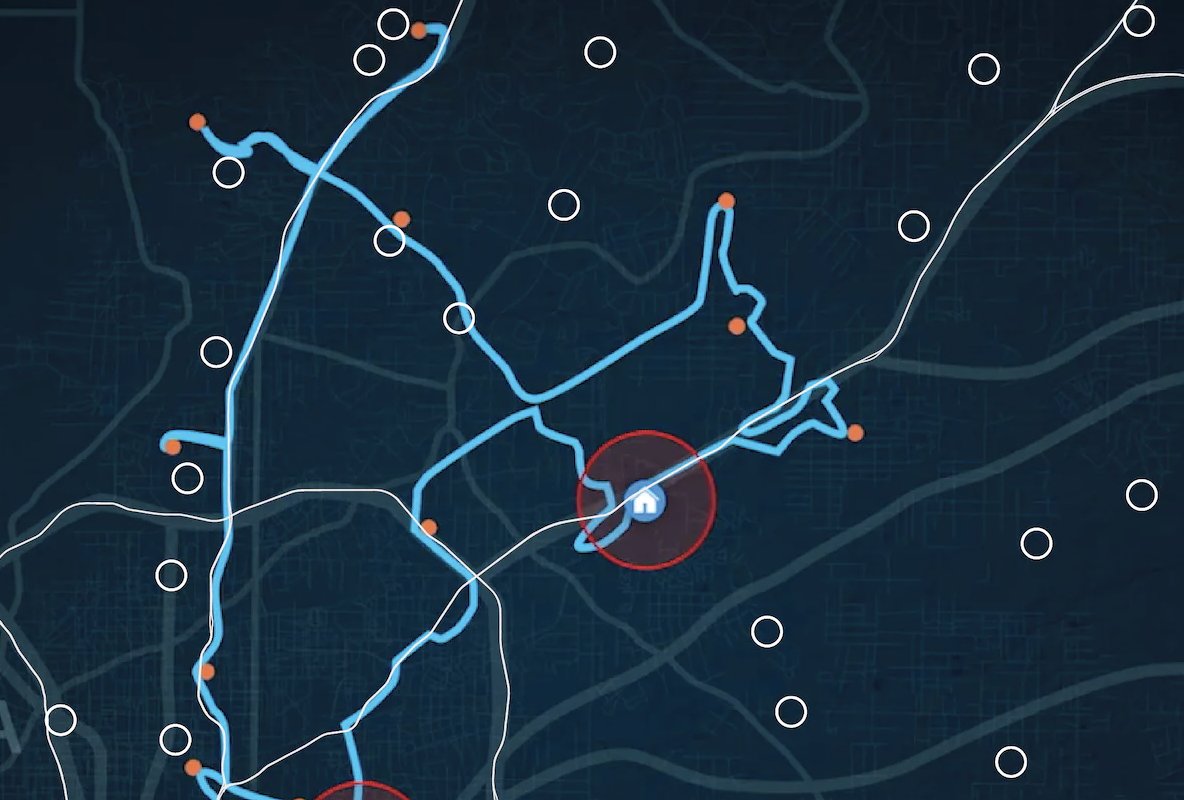 All of this sets aside that there's no evidence TTV or D'Souza knew where at an address the drop box *was*. A drop box could have been around back of a library, but if someone drove by where the street address turned up on a map, it would have been counted.

Instead of showing the purported data on mules, the movie shows footage of drop boxes using publicly available footage.

The most important thing to know is that none of the footage shows any one person visiting multiple drop boxes.

This despite D'Souza and TTV insisting in the movie that they did. One lady is said to have visited "dozens" of drop boxes — but no other footage is ever shown of her.

Importantly, she's also one of the majority of people shown who doesn't obviously deposit more than one ballot.

This, too, is often just asserted, as with my favorite "mule," someone the film refers to as "bike guy."

Here's the clip. First watch it with the sound off. Then turn the sound on. https://t.co/SjxVALWSGg

Everything nefarious is just Gregg Phillips (the guy with the beard) making claims. Does it look obviously like more than one ballot? Is he obviously trying to hide what he's doing?

It's all insinuation. And this guy is not shown going anywhere else.

D'Souza et all insist no one would take a photo of depositing a ballot. But here's just such a photo, taken at that exact drop box. Because people like to post about voting on social media. https://t.co/5kjZedUjGM 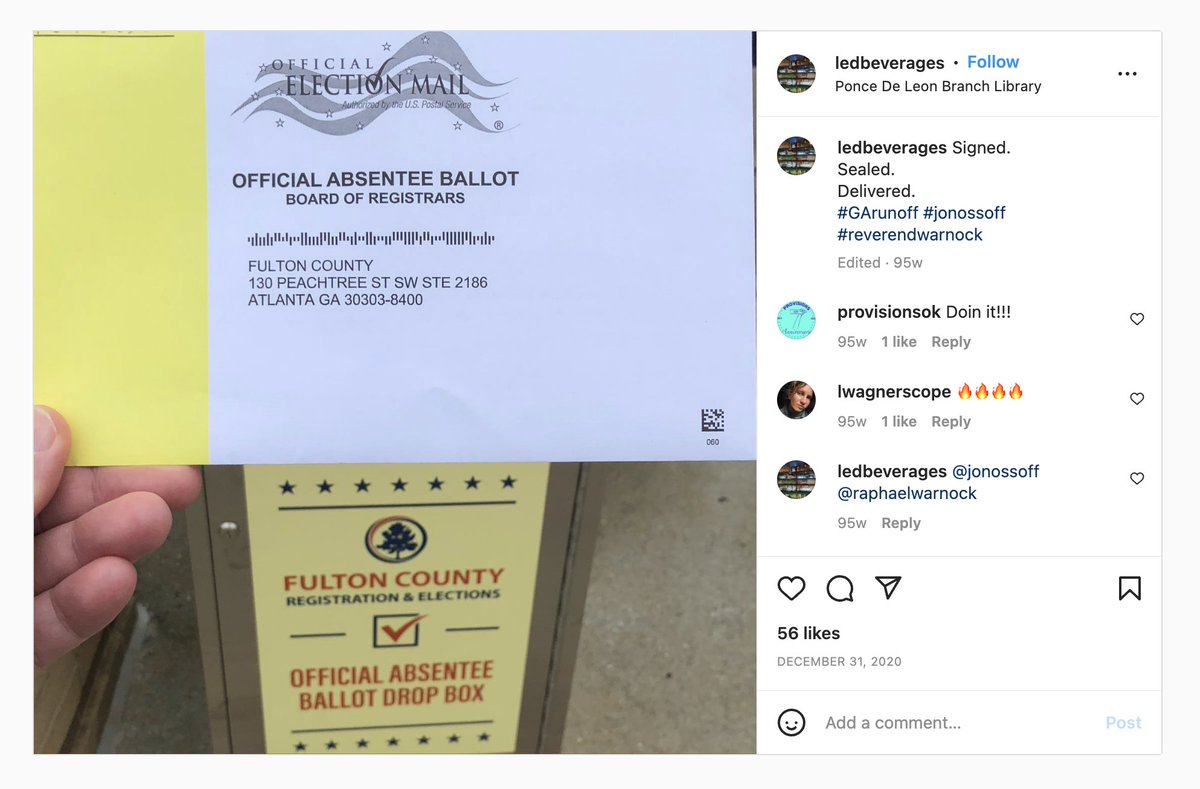 There's another question, of course: would people involved in a racket to commit a federal crime on a wide scale ask that their minions create photographic evidence of the crimes? It's moronic.

There are some people shown inserting more than one ballot. But that's not necessarily illegal.

One man, for example, was investigated by the GBI after appearing in the film. They cleared him after establishing he was casting votes for family members, as is legal.

In the movie, D'Souza said, over footage of that man, that the votes were illegal. The man is now suing for defamation. https://www.washingtonpost.com/politics/2022/10/27/2020-election-fraud-claims-voting/

In other states, the same carve-out exists: you may submit ballots for others (under the 2020 rules in some places) or for family, etc. So even the others in the handful of people shown submitting multiple ballots may have been doing so innocuously.

In the film, D'Souza does something amazing: he purports to come up with an estimate of the number of "illegal" ballots cast by the mules. Here's what he says about Philly. https://t.co/joG8aGQPlo 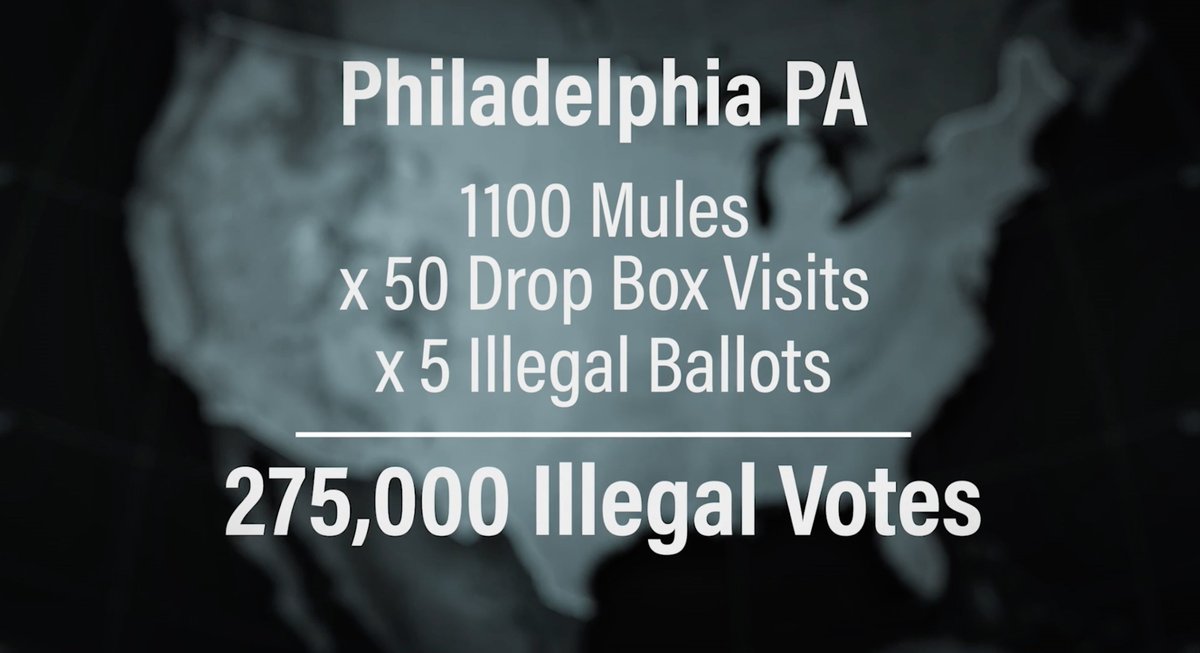 I asked him where the estimate of five illegal ballots per drop came from.

He claimed TTV's experts could see people had multiple ballots, which is some CSI/"enhance!" level nonsense. Even if you could do this, which you can't, how do you extrapolate?
https://www.washingtonpost.com/politics/2022/05/17/discussing-gaps-2000-mules-with-dinesh-dsouza/

But D'Souza needed a hard count to "prove" that Trump won, in order to address the market demand the film was created to meet. So he just makes up this average and, voila, the mules cost Trump the election.

All of this is setting aside that dumping more ballots in one drop box would be easier, that mailing them would be, too, and that there are checks in place at the back end to catch illegal votes.

Which, again, is important: Even if you, a legal voter, gave someone your ballot to drop in a drop box, if collecting ballots is illegal that doesn't make your *vote* illegal. Should that vote not count?

Gregg Phillips first gained national attention in 2016 when, before all the votes were certified, he claimed that his organization had identified 3 million illegal votes. Trump celebrated it. It was not true. https://www.texastribune.org/2016/11/28/trumps-unsupported-claim-voter-fraud-has-texas-roo/

No evidence ever emerged. And that tells us everything we need to know about Phillips.

But we don't need to stop there. In the film, there's also a segment in which TTV suggests that their geolocation data solved a murder in Georgia.

The murder was already solved before TTV did anything. But this was included in the film to suggest that the group had 1) experience and 2) technical know-how to solve crimes with geolocation data.

D'Souza, of course, has his own credibility issues, from his past, broadly debunked movies to the pardon he was granted by Trump after pleading guilty to making illegal campaign contributions about a decade ago.

He's also just dishonest about the film. In May, he celebrated this arrest of a person in Arizona, which he linked to the movie. https://twitter.com/DineshDSouza/status/1530192232522948610

But this arrest was also — according to D'Souza — purportedly the reason that mules started wearing gloves when dropping off ballots. You can see him talk about it in my interview with him. https://www.washingtonpost.com/politics/2022/05/17/discussing-gaps-2000-mules-with-dinesh-dsouza/

This is how the film works: they gin up something nefarious seeming and claim it's an insight into the inner workings of the evil-doers. Like the guy taking a photo of his ballot. They offer no evidence for this being policy. They just claim it is.

Anyway, earlier this month, the Attorney General of Arizona sent a letter to the feds suggesting TTV be investigated after allegedly repeatedly offering his office false information. https://www.washingtonpost.com/politics/2022/10/17/team-behind-2000-mules-is-called-out-deception-again/

This is Mark Brnovich, recently mocked by Jon Stewart for denying the election results. But even he thinks TTV is dubious. https://twitter.com/TheProblem/status/1584877443864662016

4. NOTHING ELSE CAME OUT

TTV and D'Souza also claimed that there was more to come. TTV pledged they would "pull the ripcord" and release all their data.

They didn't. In fact, at an event this summer, they explicitly turned the page on the "mules" theory, offering no more data and turning their attention elsewhere. https://www.washingtonpost.com/politics/2022/08/15/trump-voter-fraud-2020-election/

D'Souza has a new book out that purports to backstop the film. But his publisher had to pull it from stores and reissue it.

Why? NPR got copies before and after. Claims that non-profits were involved in the "mules" effort were stripped out.
https://www.npr.org/2022/10/25/1131077739/heres-what-changed-in-dinesh-dsouzas-2-000-mules-book-after-it-was-recalled

That's clearly because someone was worried about being sued. I asked D'Souza if he'd gotten the organization names from TTV; he didn't reply. They distanced themselves from the book to NPR.

So what do we have?

Geolocation data that can't and doesn't prove that mules existed. Video that doesn't show what was purportedly rampant. Unreliable actors with a history of dishonesty. And a film embraced by the pro-Trump right.

If you believe "2000 Mules" shows rampant fraud, you're choosing to believe that in the absence of any actual evidence to that effect.

The reality, as I said a few days ago, is that it is as credible and substantiated as Mike Lindell's nonsense.

POSTSCRIPT: I didn't even mention that one of the maps showing a "mule" visiting a drop box in Atlanta several dozen times actually shows Moscow.
https://www.washingtonpost.com/politics/2022/05/19/even-geolocation-maps-2000-mules-are-misleading/ https://t.co/Llmq6NB899

It is a universe entirely resistant to accountability. https://t.co/sHwXbe7jYZ