Last week, Simone Biles successfully performed Yurchenko double pike, and since then, it's all people can talk about

Now you might be wondering what exactly makes this vault so groundbreaking. So, if you're interested, let's take a second to explore: https://t.co/1IbAcW9PVI 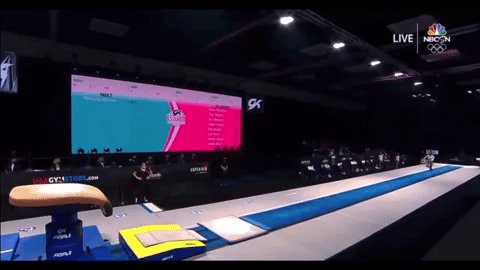 A Yurchenko double pike = a roundoff back-handspring onto the vaulting table, and two and a half flips off the table in the pike position.

But what makes this vault more difficult than most of the vaults we see at the olympics? https://t.co/4vvje5spzg 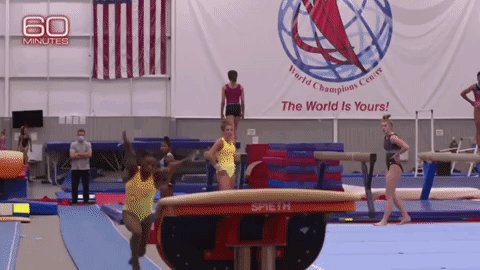 Now, a warning. Vaults are pretty technical, so this is going to be a loooong explanation. But this is a groundbreaking vault, so it's worth it! https://t.co/NvPlU8Z8PM 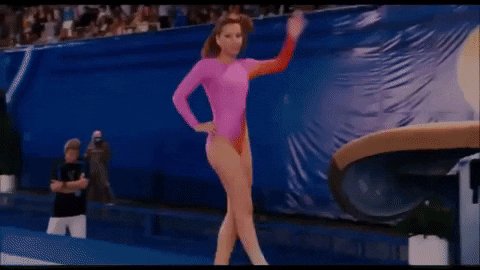 First, let's talk about the name: Yurchenko. There are five “families” or types of vault in women’s gymnastics. The four most important are handspring vaults, Tsukahara vaults, Yurchenko vaults, and round-off half-on vaults. 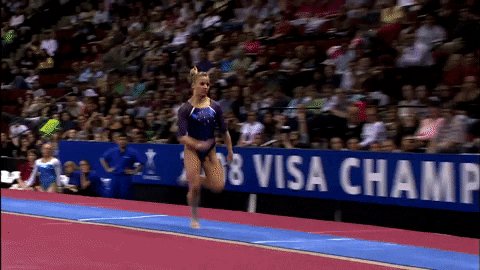 Handspring and tsukahara style vaults dominate the early history of vaulting. In both of these vault styles, the gymnast jumps straight onto the springboard and then vault from her run.

You can see this preflight in action from Ellie Black's handspring full. https://t.co/gQ3K3TSlsU 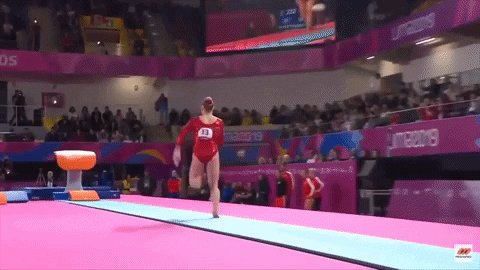 In 1982, Natalia Yurchenko created a vault revolution with the yurchenko layout: 1.5 flips in the air, in a stretched position (currently worth 4.0 points in difficulty in women's gymnastics). https://t.co/lVj96qmv7x 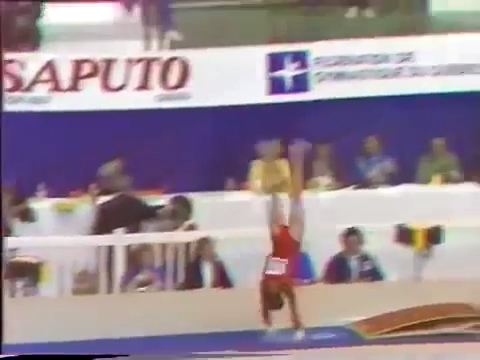 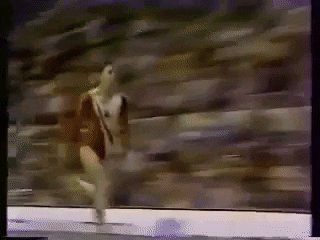 There are over 15 different yurchenko vaults in the modern era. All vaults in the yurchenko family have this distinct roundoff entry, as you can see from Biles's Amanar below.

Watch how Biles does a roundoff onto the springboard, and then a back handspring to the table. https://t.co/ilUzEJVkL0 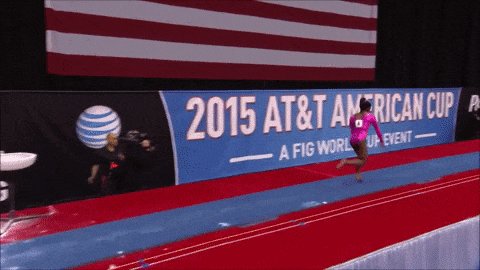 Because Natalia is a BEAST, she also created the Yurchenko layout full (the FTY): one and a half flips in the stretched position, with a full twist.

Here it is, performed by Nia Dennis. It's worth 4.6 points in difficulty in elite gymnastics. https://t.co/CYX5be6buT 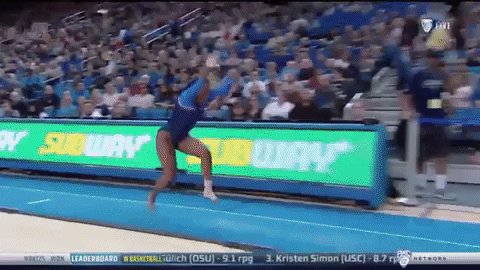 In 1987, gymnasts were like "let's do a DOUBLE twisting yurchenko" - two twists in the stretched position.

The DTY, performed below by Mai Murakami, is now a common vault for high level gymnasts, and worth a 5.4 in difficulty. https://t.co/5DJpYoYxrN 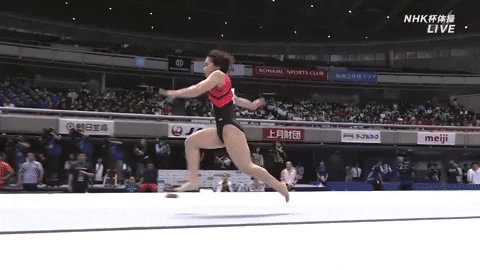 Finally, in 2004, we had our last major upgrade in the yurchenko family: the Amanar - 1.5 flips in the stretched position, with two and a HALF twists.

This is THE McKayla Maroney vault from London 2012. You remember. I remember. The north remembers. Worth 5.8 in difficulty. https://t.co/uIydAtXvhC 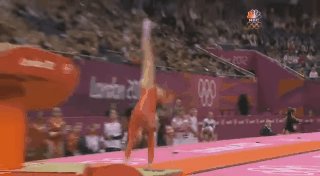 In the contemporary era of gymnastics, yurchenkos are the most popular style of vault for elite women's gymnastics, because the roundoff entry allows women to build tremendous power before they hit the table. 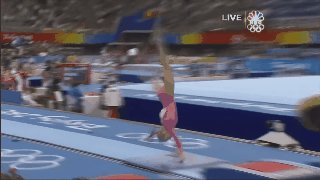 Vault upgrades have been fairly linear up to now: first a full twist, then a double, then a 2.5. So most people thought the next innovation would be the triple twisting yurchenko (the TTY). 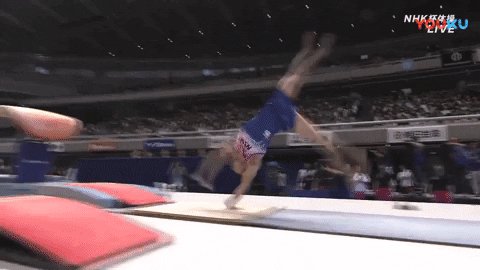 Now, this whole time we've been talking about adding *twists*. But what if you added another flip instead? So rather than doing 1.5 flips in the air - you would do 2.5.

That's what Ioannis Melissandis did in 1998 when he performed the first Y double back. https://t.co/0O7VHfp0mS 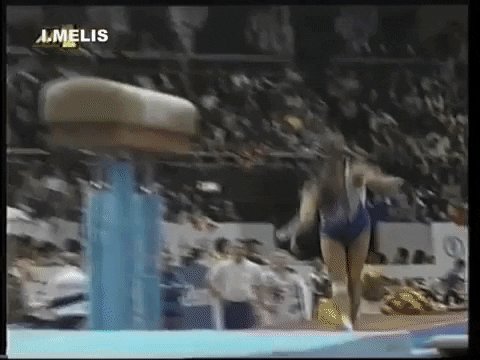 On the internet, it's easy say "add a flip!" But remember, it took almost twenty years to add half a twist to the DTY. Adding a flip is much harder: it requires the gymnast to achieve even more height + distance off the vault (so they can rotate their body one more time). https://t.co/MPv9kpgwCK 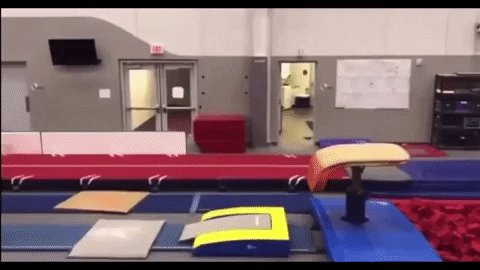 Plus, with the Y double back, you have to go straight from doing 1.5 flips to doing 2.5 flips. You can't add *just* half a flip.

Why? Well, as you can see from the stills, if a gymnast landed at end of the 1st or 2nd flip, she would be on her stomach/head. 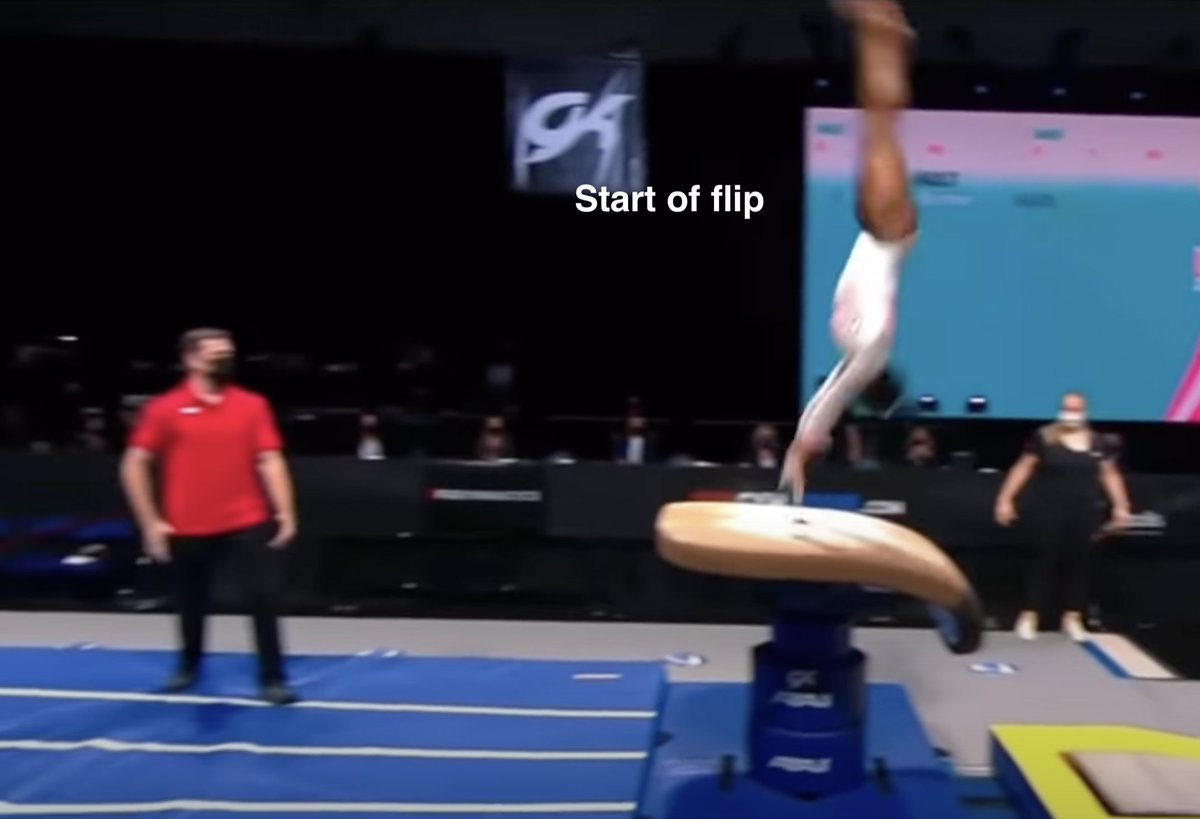 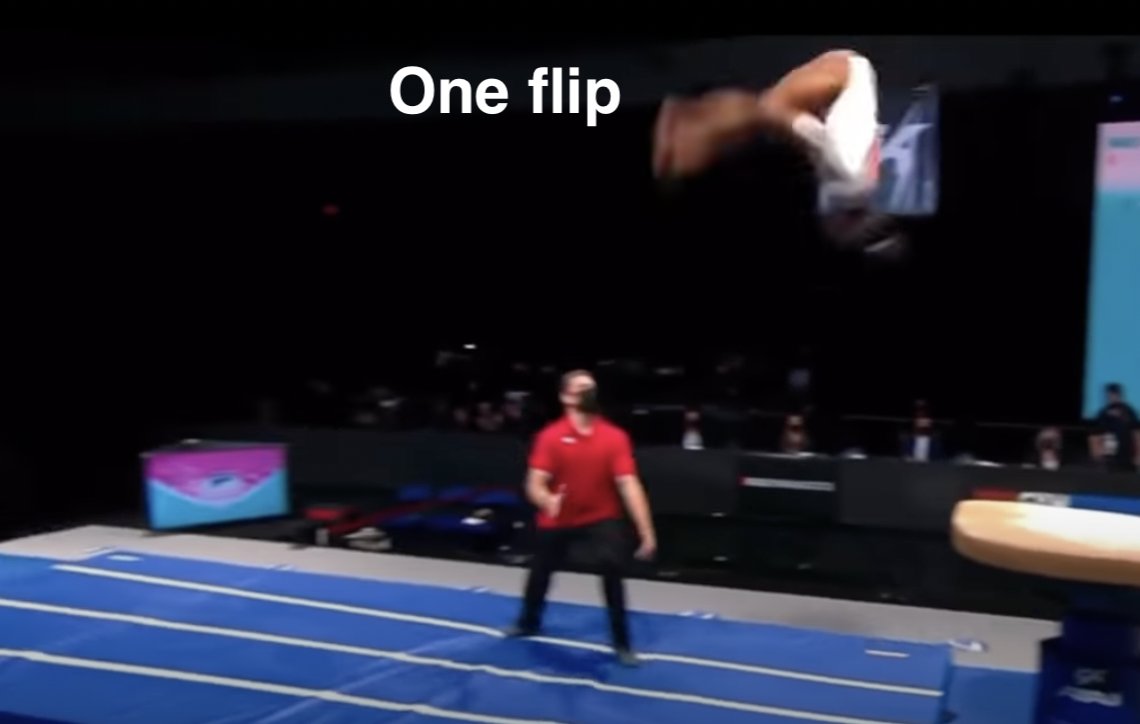 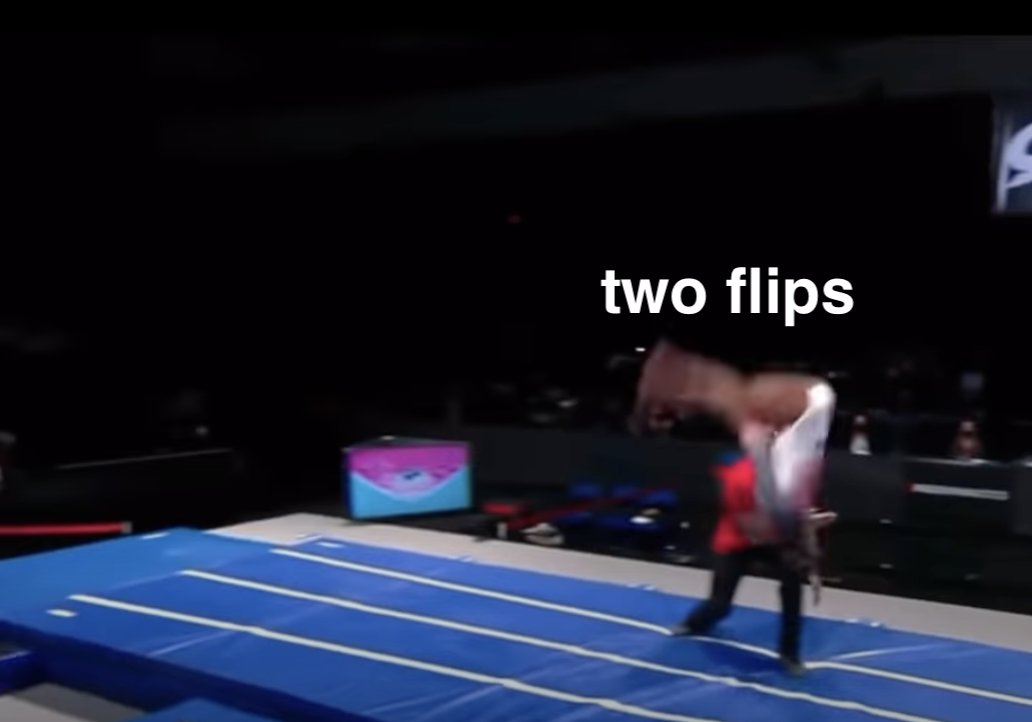 If you want to learn an amanar, first you learn the full twist, then the 1.5, then the double (etc.). With the double tuck, there's no progression. You MUST go straight from the 1.5 flip to the 2.5, because those are the only safe landing positions. https://t.co/00RCC6uxAt 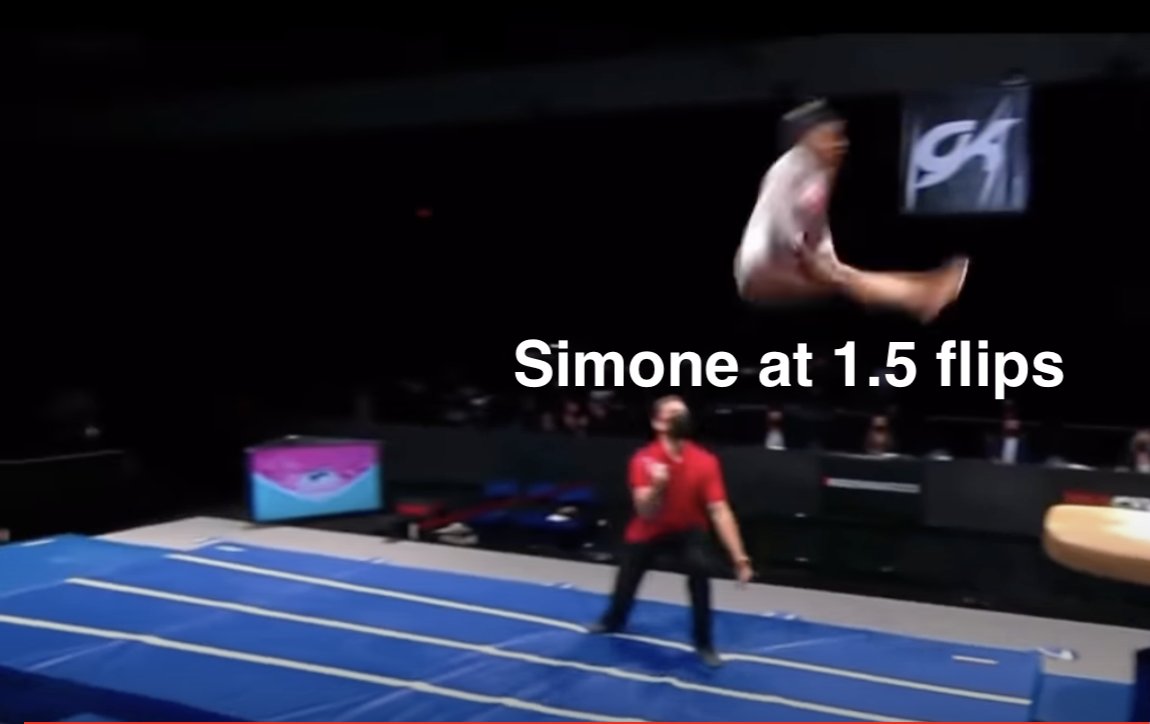 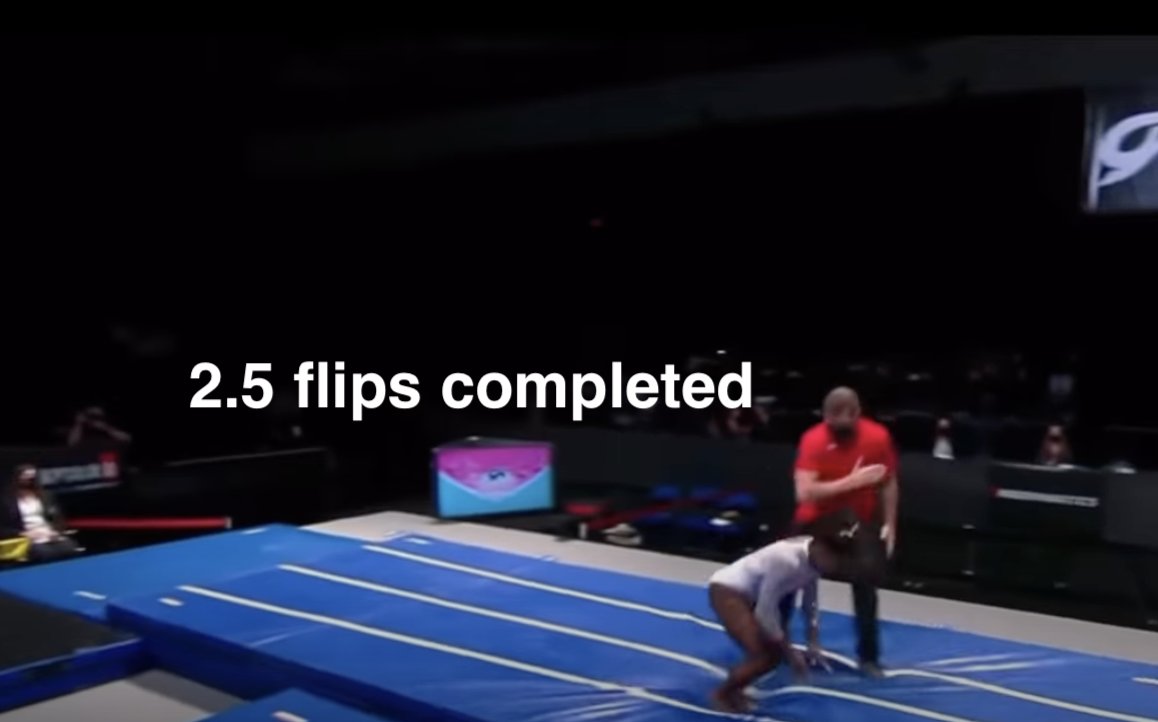 That's why the Y double back is a dangerous vault. Not enough height, not enough power OR too much height, and too much power - and you could land on your head.

Yurchenko entries famously give gymnasts a lot of power. What makes the vault possible makes it dangerous. https://t.co/Lwko7S5WGZ 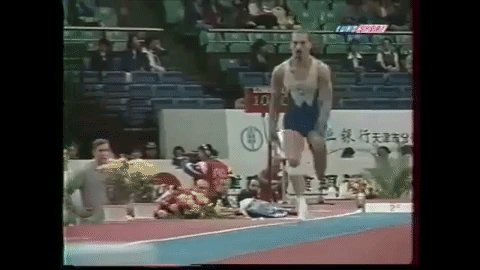 In fact, the yurchenko double tuck/pike is so difficult that even men don't compete it often - see Kristian Thomas, from England, for a rare exception. https://t.co/wlQaoYcduD 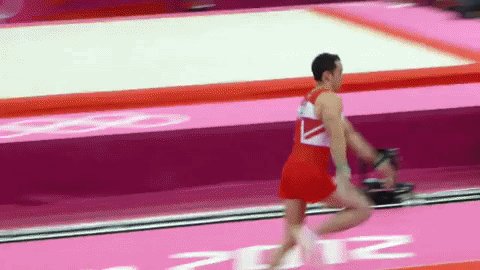 So that's the *major* reason Biles' Yurchenko double pike is so groundbreaking: it adds a full extra flip to the most difficult vaults currently being competed in women's gymnastics.* https://t.co/nEkQMWu18V 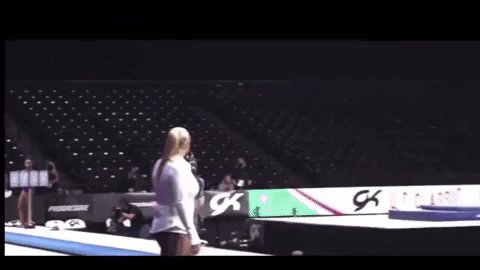 The other reason Biles' Y double pike is so groundbreaking? By doing a double pike instead of a double tuck, Biles essentially *skipped* a skill (the yurchenko double tuck) and went straight for a harder upgrade.

Piked skills are more difficult than tucked skills. In a tuck (left), the gymnast's knees and hips are bent, allowing her to rotate and flip faster. It's the easiest flipping shape.

In a pike (right), the gymnast keeps her legs totally straight, which slows down her rotation. https://t.co/Otjlfnb3up 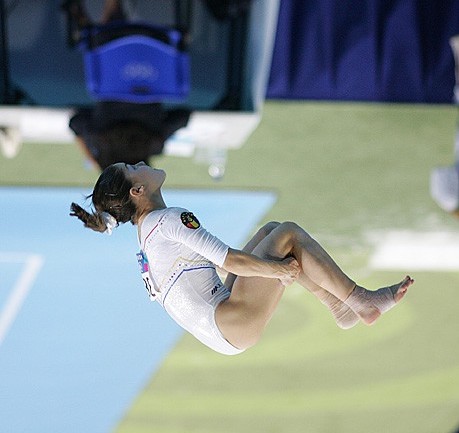 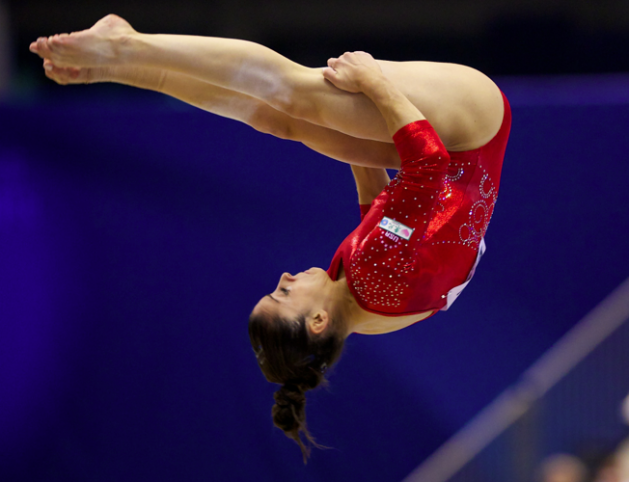 She did it on hard mode, doing a more complex form of the flip and skipping over the easier upgrade.

THAT'S why she's the greatest. https://t.co/z2vJx9bVOj 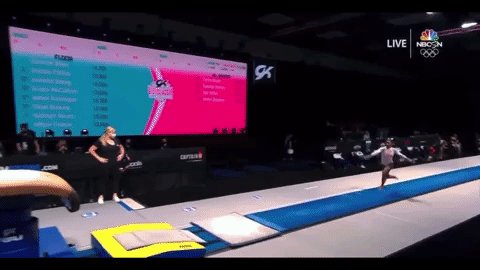 If Biles successfully competes the Yurchenko double pike in the Olympics, it will become the *fifth* skill named after her in the Code of Points

(after her other vault skill, her two floor skills, and her beam dismount naturally...) https://t.co/vDCbAyXVyC 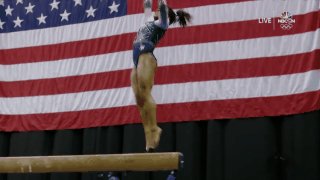