I guess I'll be live tweeting a coup now. Things are still pretty quiet for now, though people are awake and scared. I've been fielding calls since 6 am from friends and relatives. The internet is in and out and my sim card no longer works.

Trying to figure out what to wear has never been so high stakes. Do I choose a longyi and sandels and blend in better or do I wear pants and sneakers for better mobility?

ATMs near my apartment are no longer working and there are rumors the banks won't be opening today.

I've walked over 10 blocks now, and every NLD flag I saw in the last couple days is gone. I suppose no one wants to be an easy target. I wonder if there are people frantically scrapping of NLD/ASSK car decals.

The market is busier than usual, but people seem to be buying fairly normal amounts. It doesn't look like panic buying. The increased patronage may be due to a noticable increase in male shoppers. It seems like whole families are out and not just the women. https://t.co/oU9G7krr6Y 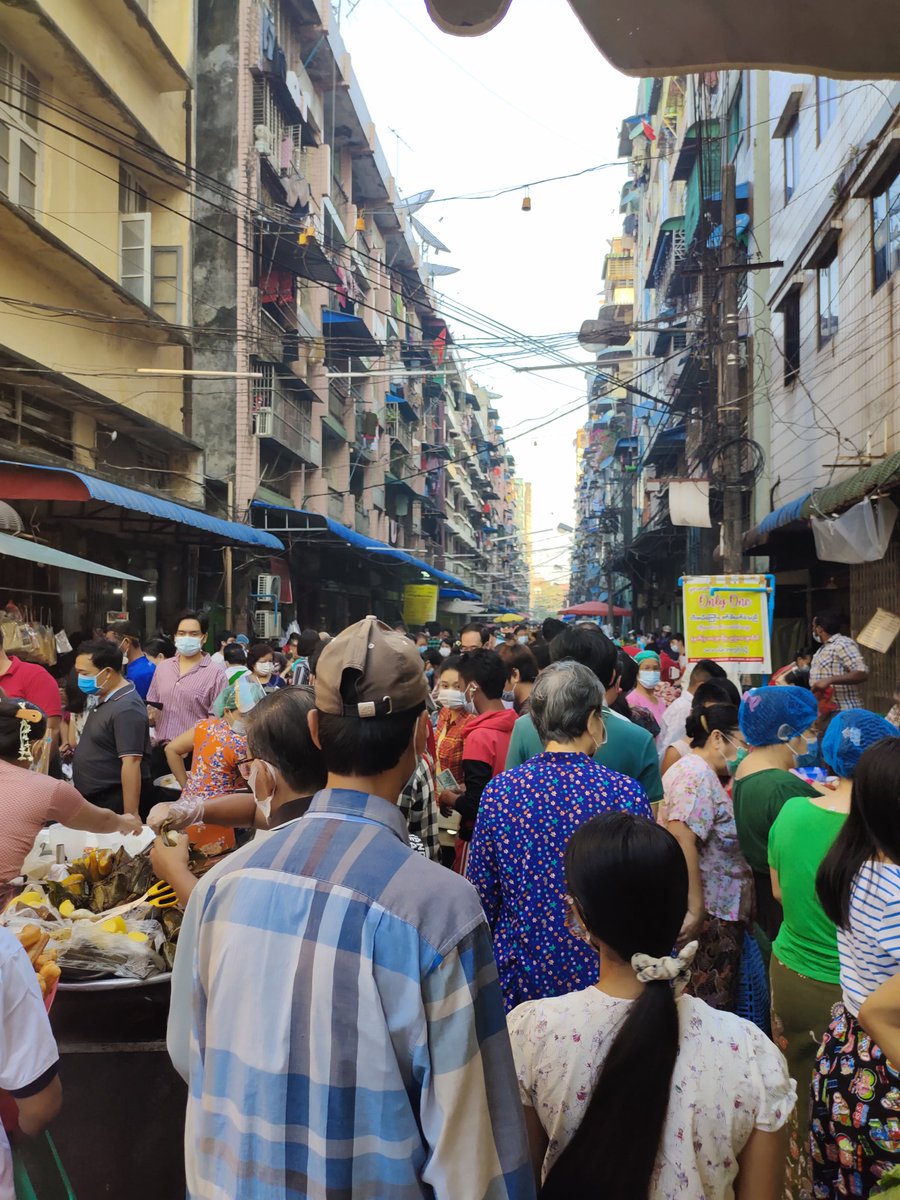 Snippets of convo I've overheard this morning regarding the coup:
"It can't be helped"
"I told you so. We know them."

Things are so "normal" that YCDC is still harassing poor street vendors in the middle of a coup! https://t.co/GrT5Ber5Mk 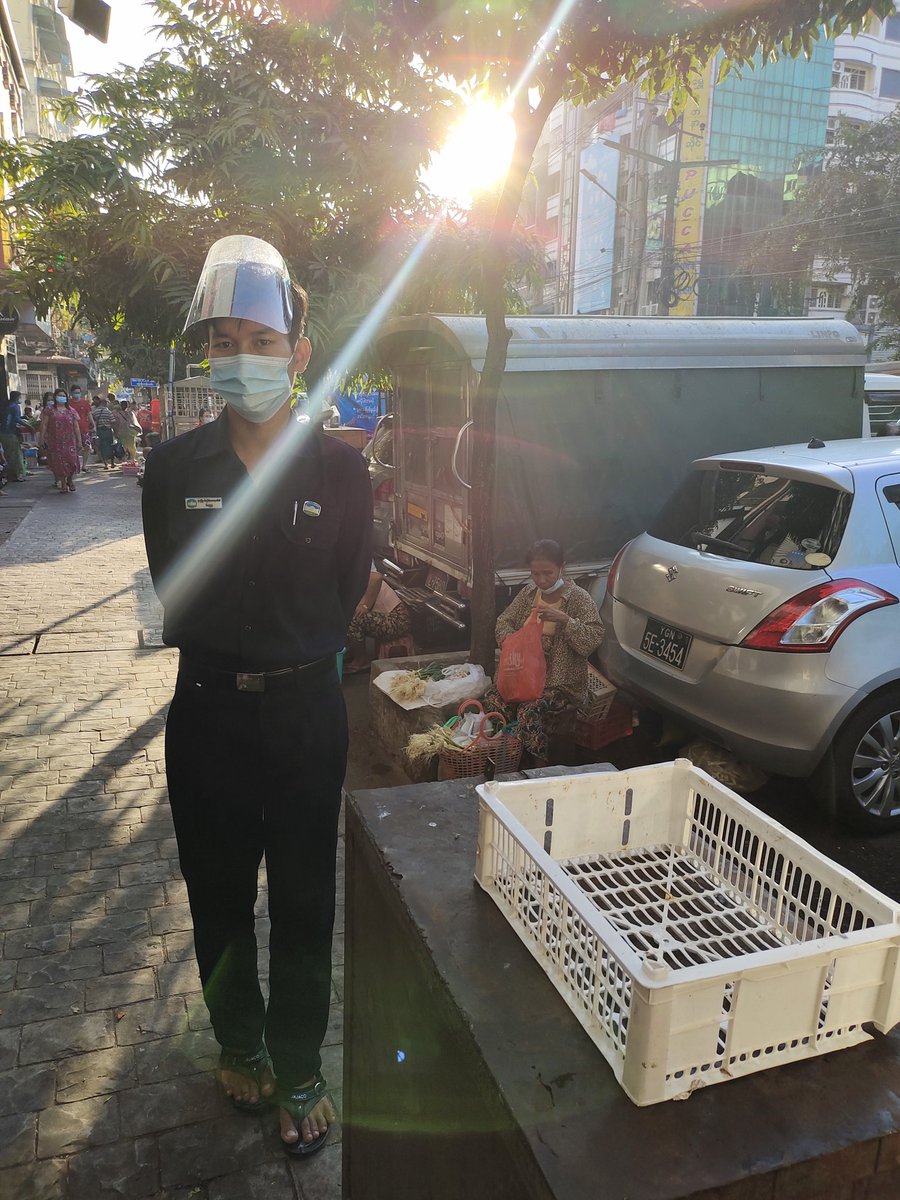 This is a small thing, but I haven't gotten any communications from the US Embassy through their safe traveller program (though I was constantly getting COVID updates a while back), nor have they posted anything on their Facebook page.

I've also seen to have been logged out of Signal, Telegram, ect overnight. I can't log in again since I can't get a verification code due to the cell service shut down

My WhatsApp is working though

Military tv is citing 417 and 418 of the 2008 constitution for the coup, stating that there have been wide spread protests against the UCE's handling of the election and the election results. This military control will last 1 year. https://t.co/SR2e4o4wcS

People have been at my door for like 5 mins now. No announcement of who they are. I'm not going to open the door or signal that I'm home. But if I go dark, tweet at Joe Biden to save me I guess.

Ok. They are gone now.

The latest rumor is that all internet access will be cut of at noon. So if you stop hearing from us, that's probably why.

So the noon internet cut off seems to have been just a rumor. There's also rumor of a 2 pm one. I'm doubting this now. The Rakhine shutdown was mobile internet only. It makes sense since it neutralizes most citizens without the logistics of figuring which offices use what wifi.

But who even knows. It's Myanmar, anything can happen.

Three cars with Myanmar just drive past blasting patriotic music. The back of the truck was loaded with men carrying swords. https://t.co/P1FvTbbFfv 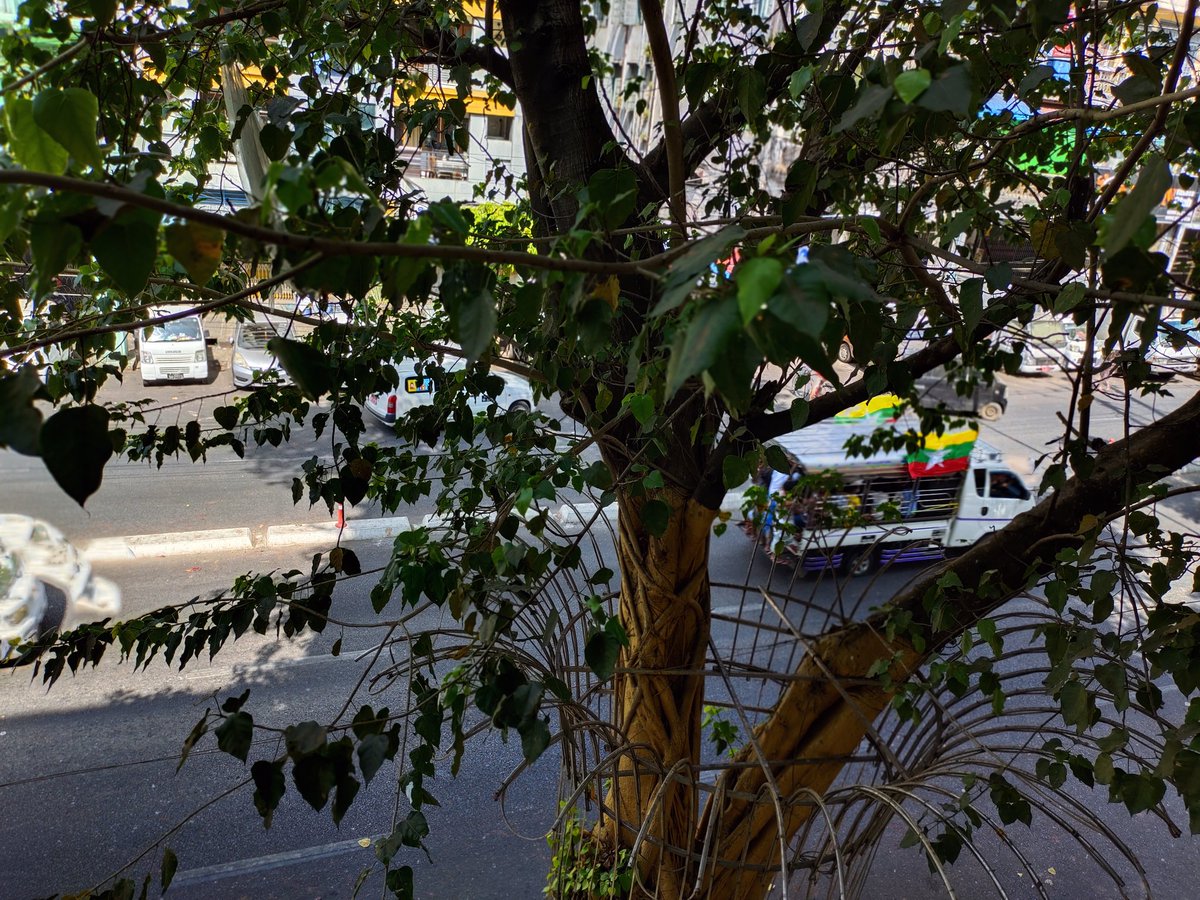 Another caravan, this time a mix of monks and lay people, some dressed in camo. They are chanting for good health for General Min Aung Hlaing, commander of the armed forces of Myanmar. https://t.co/G6IFhnqqnn

I'm with some family. My cousin's friend (a ship captain) just told him that cargo ships that were scheduled to go out tomorrow have been told the schedule is suspended. My aunt called the coup "rude".

More from my aunt, "This is just like when I was a child. These exact tactics."

If I were a better Buddhist, I would possess the chill to nap during a coup like this man. https://t.co/Ue2aak2aT9 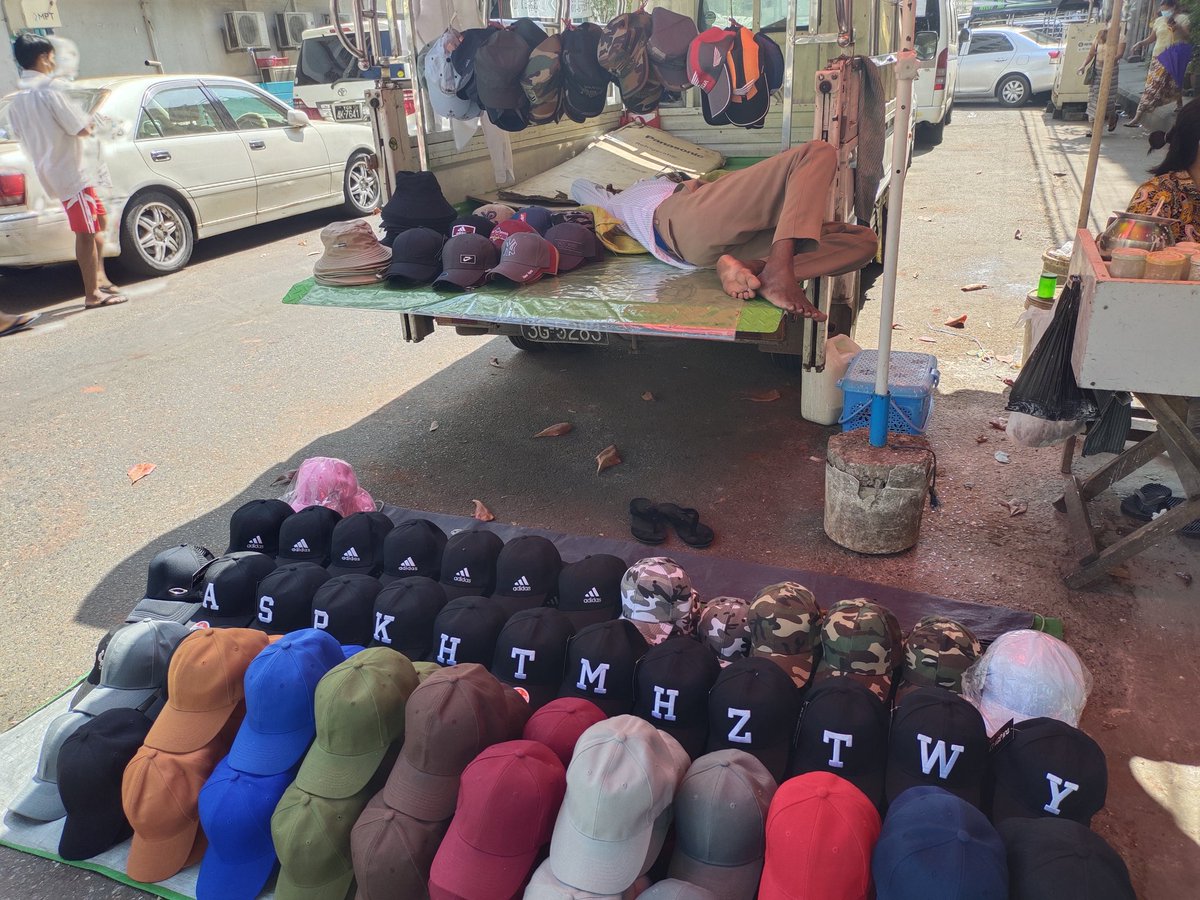 Now that things are quieter (?) I'm going to take a quick break and have a mild panic attack. Be back soon.

Flights may be suspended until end of May according to this interview resourcing from the BBC. This includes domestic flights. https://t.co/HMH8wsUuon

Good morning. It's day 2 of the #Myanmarcoup There were worries last night that internet and/or electricity would be cut off at midnight. That seems to have been yet another false rumor.

Everyone here is in a state of perpetual uncertainty. No one knows anything for sure, and there are intentional efforts to foster this environment.

Banks were closed yesterday. We all saw this with out own eyes, and yet the state-run newspaper tells us that these were only rumors. We are being gaslit. https://t.co/gXKNsRnmMV

I don't know why, especially since so many have already been detained, but seeing this list of terminated ministers in the state-run paper broke something in me. https://t.co/5ljBFKIrLt 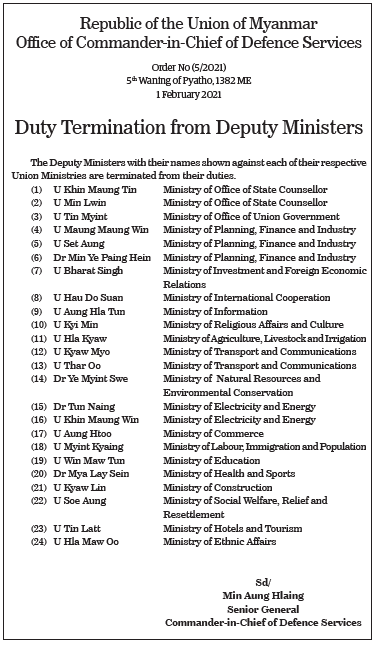 Adding to the surreal vibe this morning. One of the local news outlets is airing a spot on some vacation town halfway across the world. https://t.co/0UvP6qNIYQ

Rice prices and exchange rates are stable this morning and gold shops are opening again. There were fears of hyperinflation and people rushing towards currencies they believe would be more stable. This seems not to have manifested. At least for now. https://t.co/Ikx4pNShd8 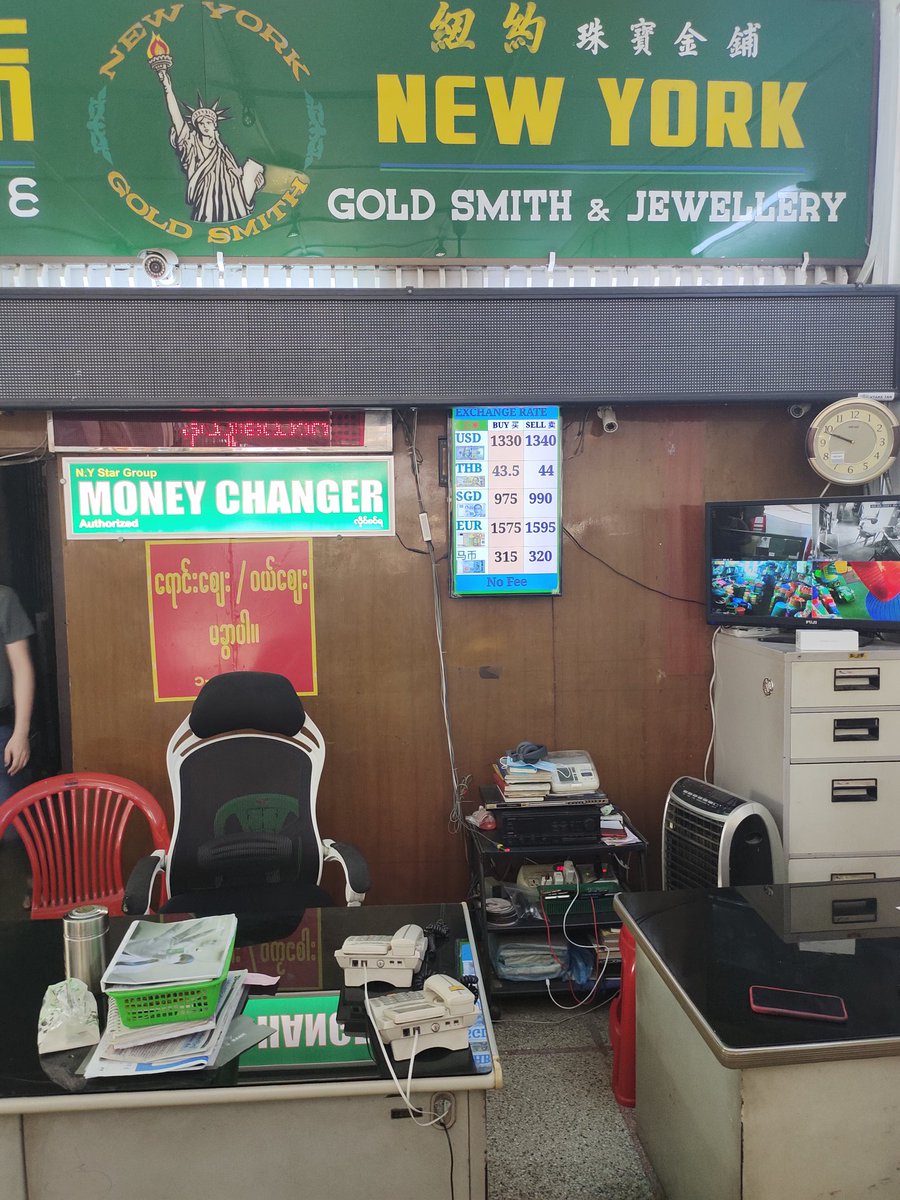 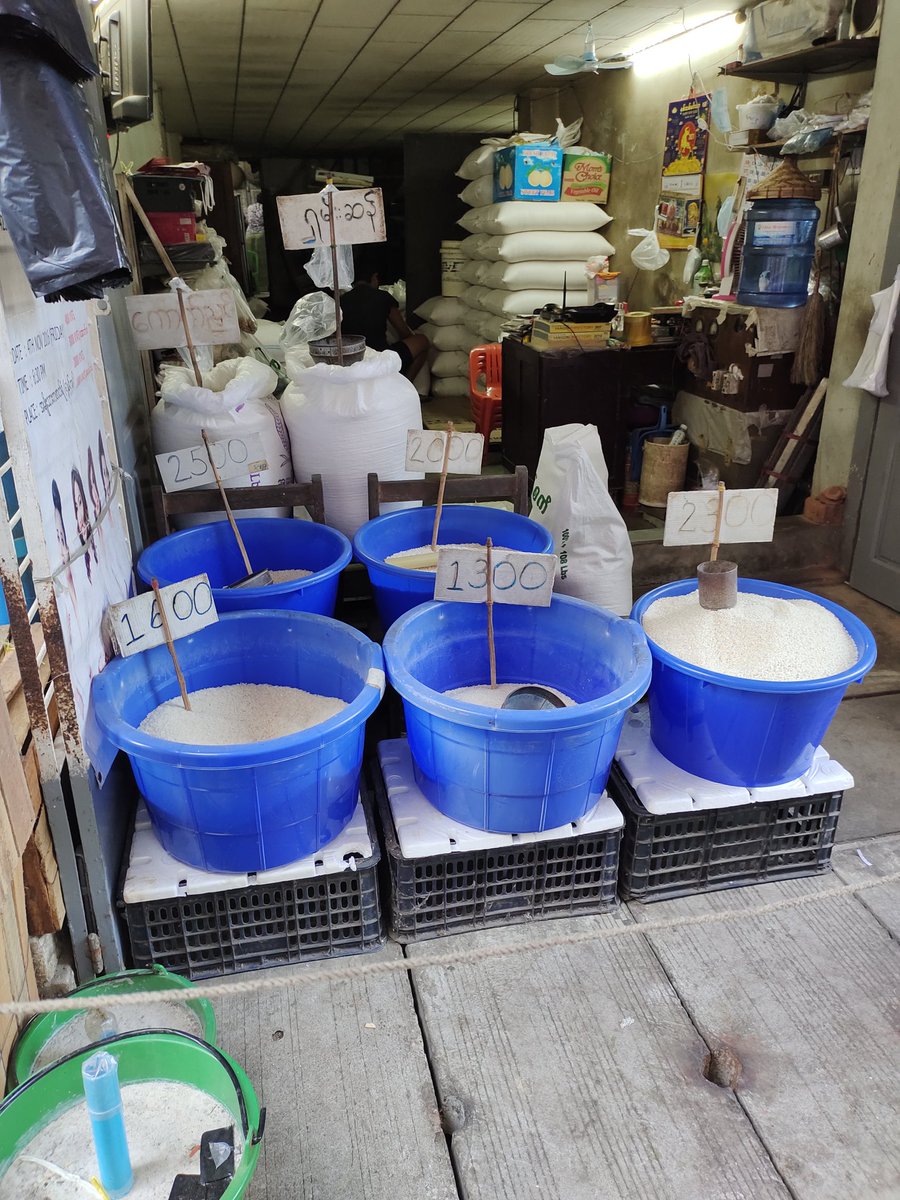 Also, to all of you in my comments talking about how you don't care about what happens to Myanmar because of the Rohingya genocide, fuck you. The same military doing the coup are the ones who committed those atrocities. The civilian gov also sucks...

But things will only be worse for everyone, including and especially the Rohingya, under military rule. 55 million people did not commit a genocide, and even if they did, what we need is accountability and justice, not your messed up idea of "revenge".

Updates since this morning: It looks like those who were arrested yesterday are slowly being moved into house arrest. There was a huge demonstration at People's Park in Yangon of people showing support for the coup. The internet and mobile service has been relatively stable

My grandmother doesn't know about the coup and we won't tell her. She lived through British and Japanese colonization, World War II, the 1962 coup, the 1988 uprising, the 1990 coup, the 2007 Saffron revolution. She's 90 and has dimentia. She deserves to spend her last years free.

Ok. This next set of tweets is not new and more my reactions and emotions to what's been happening on Twitter.

Journalists, please don't message me multiple times. And please don't try to contact me on multiple platforms. It gives me immense anxiety to know that I have so many messages I haven't answered. I understand that you are just doing your jobs, but

Those of us on the ground are stressed enough with our own work and deadlines, keeping track of our families and friends, figuring out what the heck is going on, and preparing for an uncertain future. I will respond if and when I have the mental and emotional capacity.

If you want to use my pics or videos though, please message me. There are way too many replies and your requests there are getting buried.

Americans, please don't tweet the state department statement at me or tell me Joe Biden cares. I know you mean well, but it's actually kinda imperialist of you to think that the US can or should have so much power over another sovereign nation.

Other Americans, I'm not talking about Trump or QAnnon?!?!? Other countries exist. Please leave me alone.

Non-Myanmar nationals stuck here, I know you are scared. Try to stay calm and make sure you have the essentials. Try to keep at least two weeks of water and food on hand at all times. Get power banks and extra sim cards if you can. Stay in contact with your embassy.

If you want to help. Keep any eye out for the civil disobedience movements that are starting to grow and build momentum. See if you can provide support to those. Flow their lead. Don't call for sanctions. They do not hurt those in power.

We have entered the civil disobedience portion of the coup. Tomorrow should be very interesting. (As if every day in a coup isn't). I'm also hearing cars on the larger street blasting their horns as they drive down the main roads. https://t.co/WQH1MJOHyw

Alright. It's time for bed. (Hopefully) see you all again tomorrow.

Good morning. It's day 3 of the coup. I slept maybe three hours last night, but who need sleep when you can write in a tea fueled haze. My latest for the @nytimes on my experiences (with a wee bit of historical context sprinkled in) that first day.
https://t.co/E83Fskcaxq

I'll be sharing more later, but be on the look out today for increased pushback against the coup from Myanmar society. Medical workers (many of who are employed in government hospitals) have already begin their protest. Expect to see more from other professional classes.

I expect to see more threats/actions from the military. We've been seeing tanks since before the first day of the coup, but I have a knot in the pit of my stomach today. But this tweet is purely feeling and not analysis. Don't panic. I just wanted to share my fears to someone.

In some personal news, I'm supposed to have a job interview this morning. I reached out to try and reschedule due to the whole coup situation here, but no response. What do I do?!? 😬

Non-Myanmar nationals, relief flights are running again. If you want to leave, now is a really great time to do it.