ANALYSIS—This is a historic moment in Thailand. We are witnessing the beginning of the end of the neoabsolutist monarchy that has undermined democracy for decades. #19กันยาทวงอํานาจคืนราษฏร #WhatsHappeningInThailand 1/33 https://t.co/hKGxxsPmKh 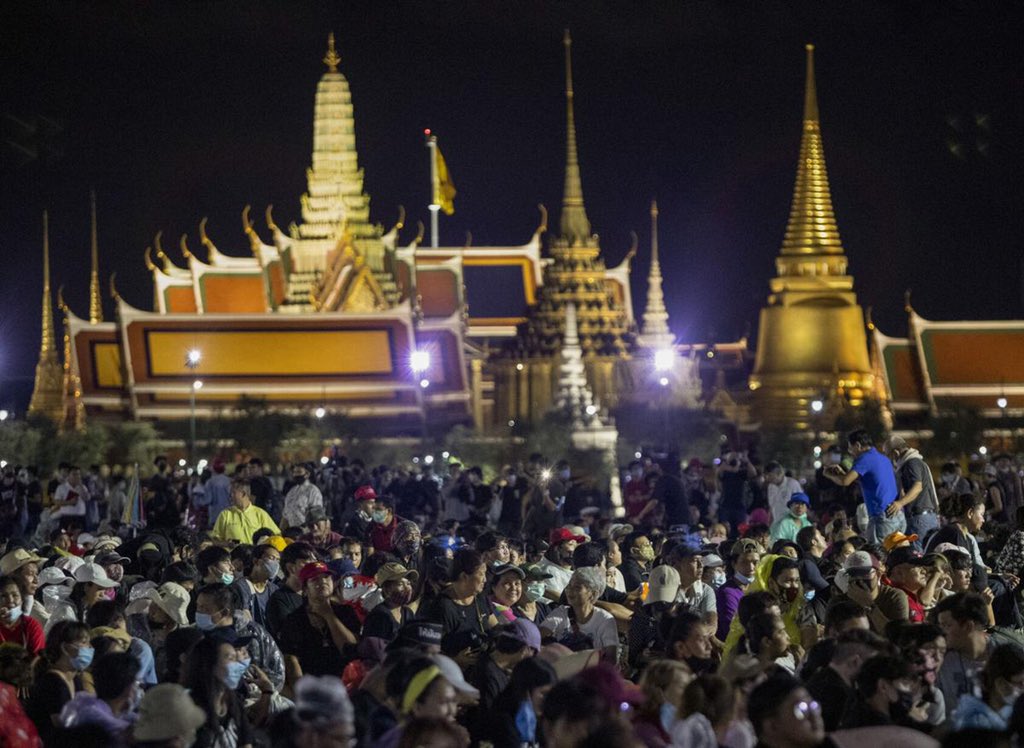 The protests in Bangkok and all over the world this weekend were extraordinary. Thanks to the bravery of Thai activists, risking jail — or worse — to criticise the king, it's just a matter of time before the monarchy and military have to reform and stop meddling in politics 2/33

Millions of Thais are now openly questioning the role of the monarchy. Tens of thousands joined the protests this weekend in person, and millions are active on social media criticising the greed, impunity and corruption of the palace. 3/33 https://t.co/mKNDxPphlG

Protesters who gathered at Thammasat University later occupied the royal cremation ground at Sanam Luang, right beside the Grand Palace, renaming it "Sanam Ratsadorn" — "the people's field". This was a symbolic, but direct, challenge to King Vajiralongkorn and his allies. 4/33 https://t.co/QkIKkuqQcX 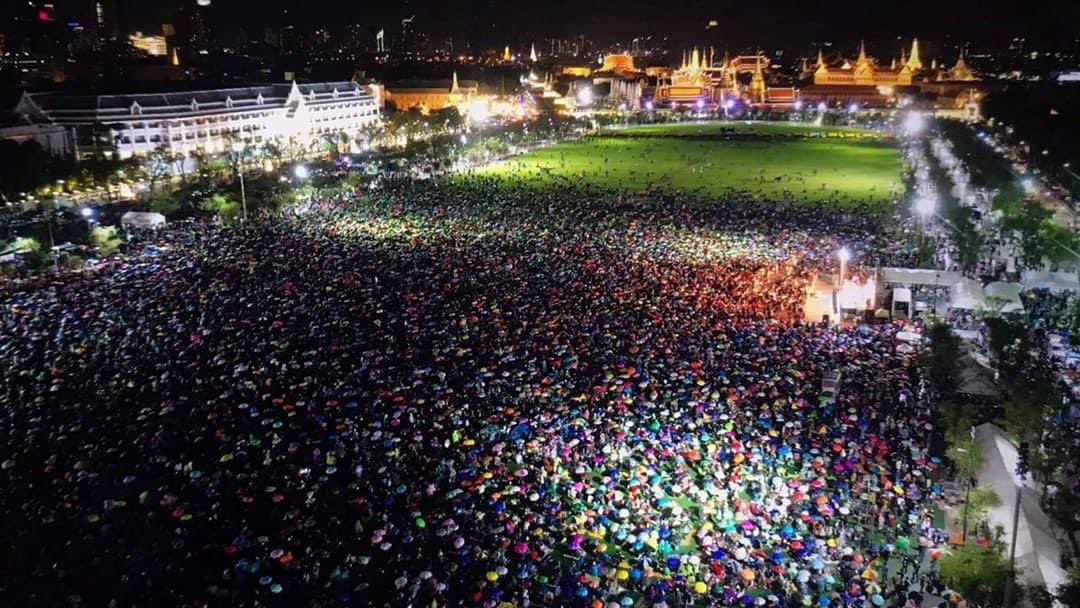 They installed a plaque at Sanam Luang declaring: "At this place the people have declared their will: this country belongs to the people and is not the property of the monarch as has been falsely claimed." 5/33 https://t.co/n0iyrBrrkf 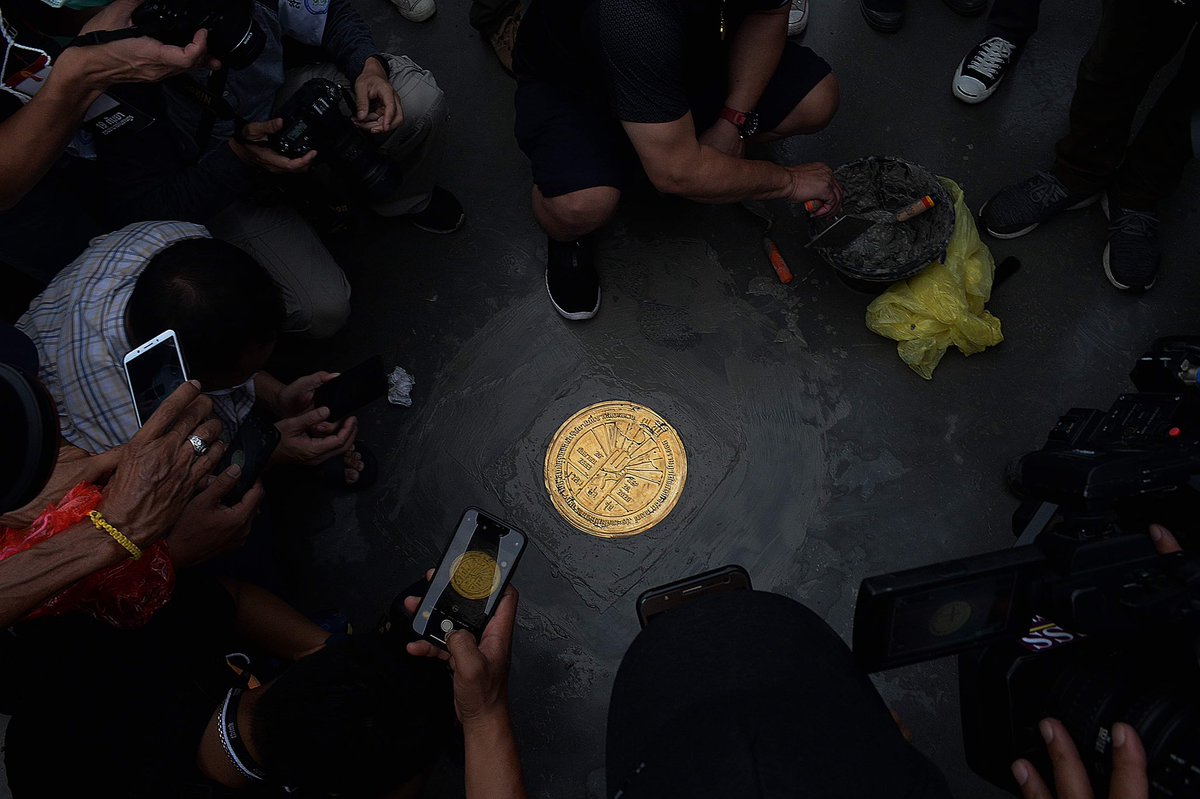 Mindful that the king and senior Thai politicians and generals are intensely superstitious, they installed it at an astrologically auspicious moment and also placed a curse that anyone who removes it will lose their sexual potency. 5/33

While the protesters don't believe these old superstitions, it was another symbolic — and highly entertaining — attack on Vajiralongkorn who is notorious for spending most of his time living in a luxury hotel in Europe with a harem of at least 20 women. 6/33

It was a courageous riposte to the removal in 2017 of a historic plaque commemorating the 1932 revolution that sought to end the absolute power of the monarchy in Thailand. 7/33

It's widely known that the plaque was removed on the orders of Vajiralongkorn, and it was replaced by another plaque inscribed with royalist propaganda.

Thai royalists never accepted the revolution of 1932 and have fought ever since to restore the power of the palace. 8/33

The removal of the plaque in 2017 was an explicit signal from Vajiralongkorn that he intended to reign as an absolute monarch. The protesters have now made clear that they will not accept this. 9/33

They have set out 10 demands for reform of the monarchy, including ensuring the king follows Thai law, that he is made accountable for his lavish misuse of taxpayer money, that royalist propaganda has to stop, and criticism of the monarchy must no longer be criminalised. 10/33

Leading activist Panusaya "Rung" Sithijirawattanakul led a march to the Grand Palace on Sunday morning to formally present their demands. They were prevented from reaching the palace complex but police promised to give their manifesto to palace officials. 11/33

It is unprecedented to see the monarchy being challenged so openly. Even a year ago, this kind of defiance would have been unthinkable. Now, it's impossible to see how the monarchy and military can turn back the clock. Everything has changed, forever. 13/33 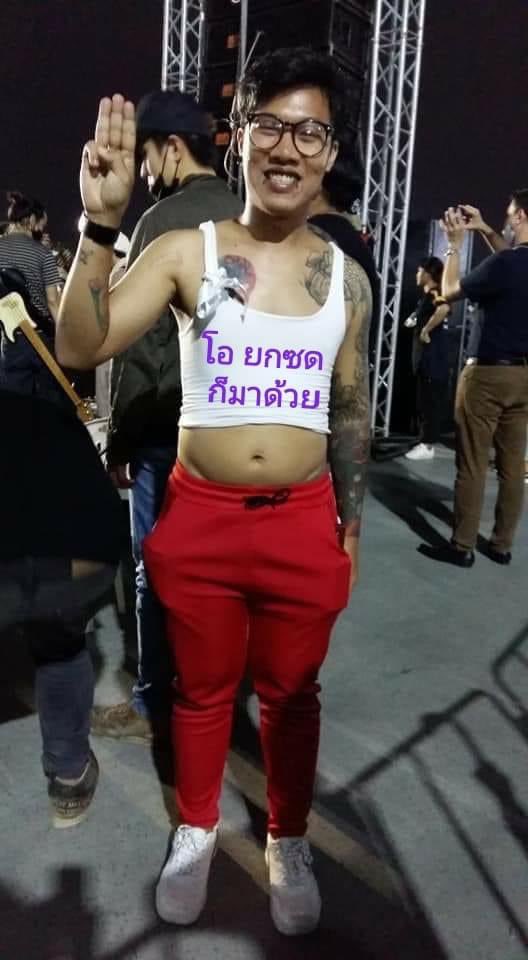 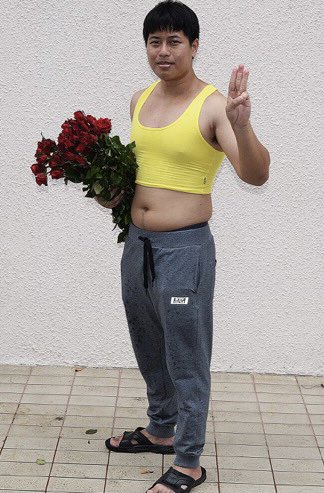 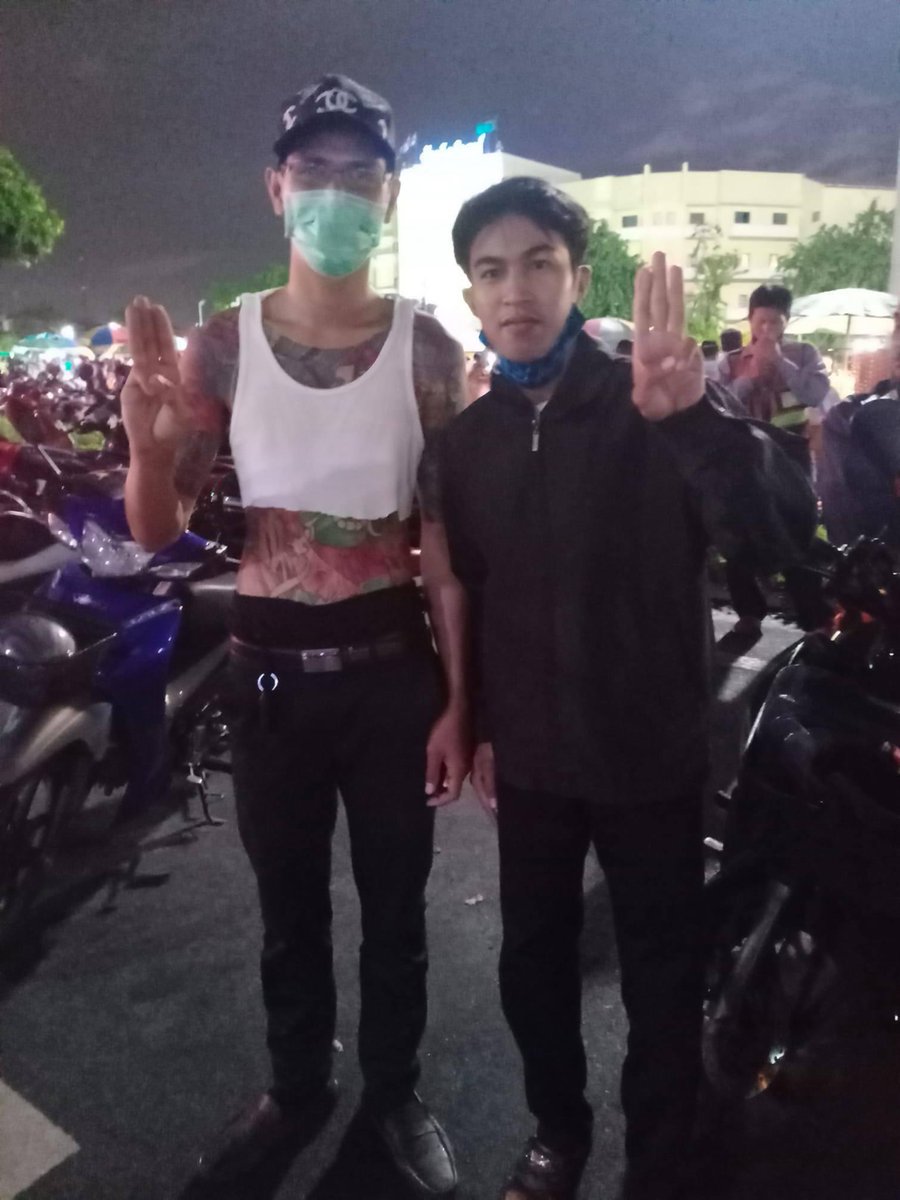 Besides the main rally in Bangkok, there were dozens of protests all over the world, and crop tops were sighted in Chiang Mai, Tokyo, Stockholm and Copenhagen too. 15/33 https://t.co/B9jZRuVE3D 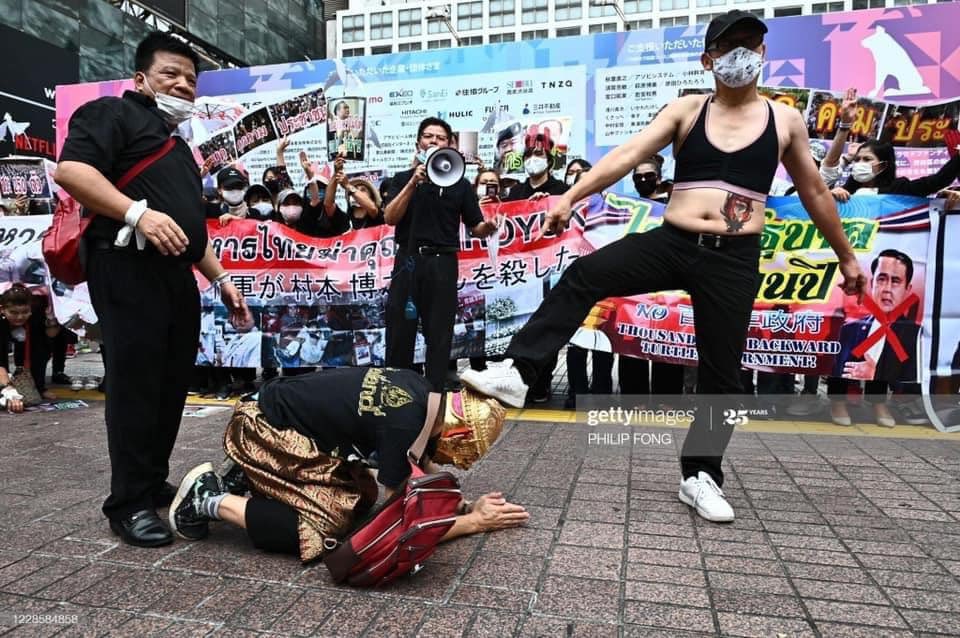 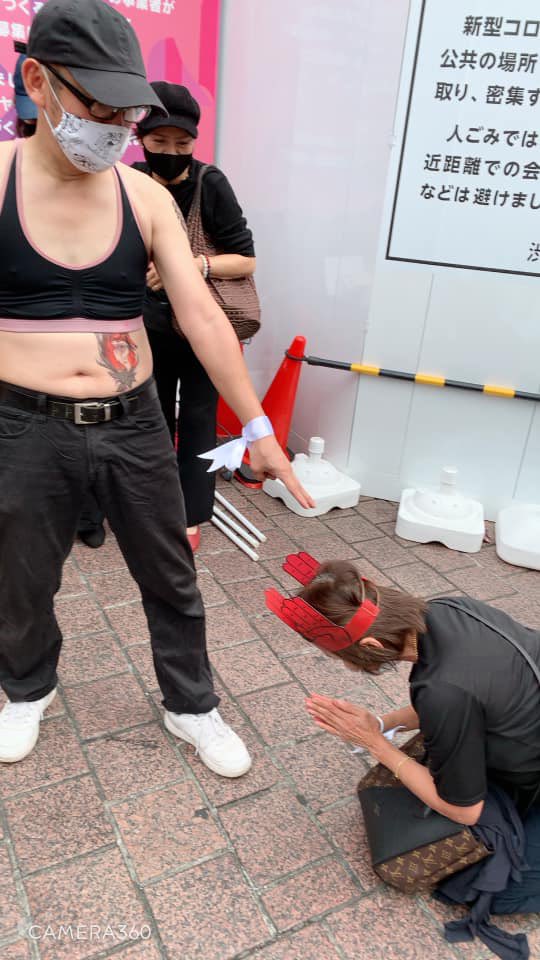 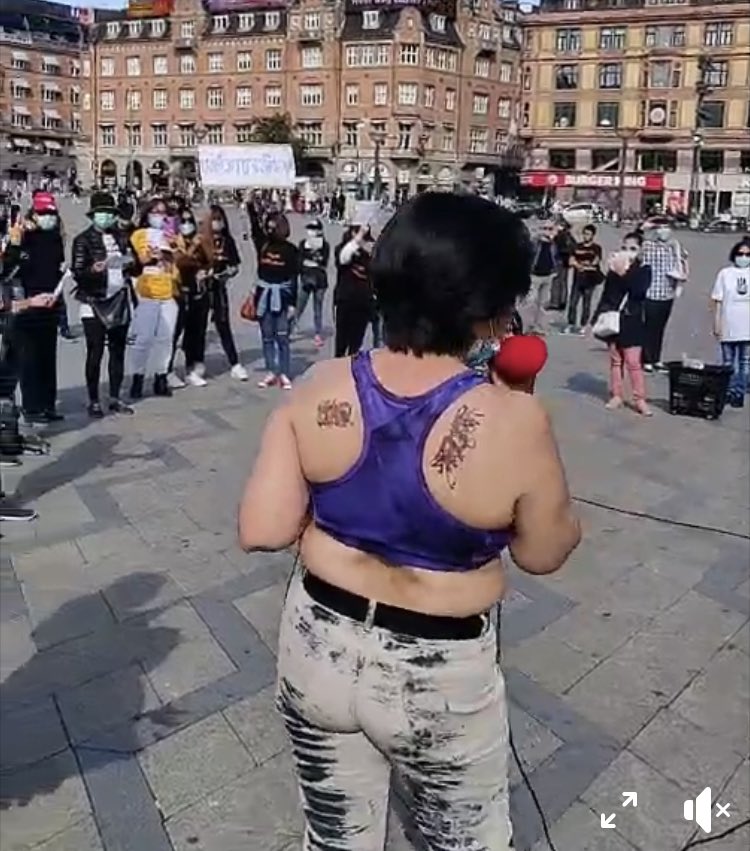 Activists are also taking aim at the king's vast wealth, with a campaign to encourage Thais to close down their bank accounts at Siam Commercial Bank, using the hashtag #แบนSCB. Vajiralongkorn is the biggest shareholder in the bank, with a 22 percent stake. 16/33

Vajiralongkorn maintains his power by fostering a climate of fear. With their peaceful protests and clever mockery, young activists have punctured the monarchy's sacred aura and it can never be repaired. 17/33

They have announced that the next protest will be at Government House on Thursday. This is a deliberately provocative move, because September 24 is Mahidol Day, commemorating the king's grandfather, and Vajiralongkorn is making one of his rare one-day visits to Thailand. 18/33

Despite facing bankruptcy, Thai Airways has again been ordered to arrange special flights for the king's brief trip to Bangkok. He is due to board TG971 in Zurich at 1330 on Wednesday, and the flight is scheduled to arrive in Bangkok at 0530 on Thursday. 19/33

Another flight, TG970, is scheduled to leave Suvarnabhumi at 0105 on September 25 to bring the king and queen back to Europe along with their large entourage. 20/33

With Vajiralongkorn in Bangkok on the same day as a large protest, and royal motorcades taking the king and queen to their base at Amporn Palace and the monument to Prince Mahidol at Siriraj Hospital, tensions will be high in Bangkok on Thursday. 21/33

The regime has been openly warning of violence, claiming that if protesters "go too far" they risk a violent backlash from Thais who support the monarchy. But this is just propaganda. The protesters are nonviolent and well-organised. 22/33

Any violence that erupts in the days or weeks ahead will be manufactured by the monarchy, military and government to try to intimidate protesters into dropping their brave campaign for reform. 23/33

All sides are aware of the ominous echoes of October 1976, when thousands of students gathered at Thammasat University to demand democratic reforms. 24/33

Although they avoided overtly criticising the monarchy, they were denounced by royalists as enemies of the nation and the palace, and were accused of staging a play that depicted the mock-hanging of Vajiralongkorn, a claim they have always denied. 25/33 https://t.co/i6uRUn9aBv 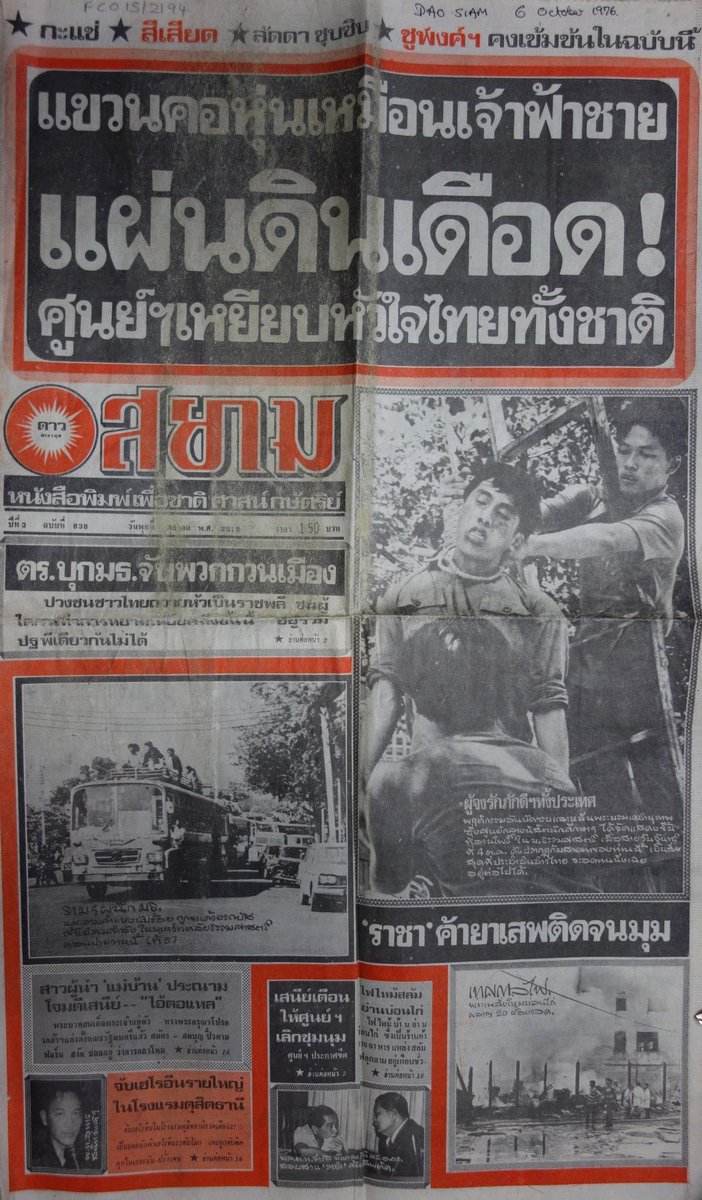 On October 6, 1976, Thai soldiers, police and state-backed ultraroyalist militias stormed Thammasat University. Students were shot, blown up by grenades, and beaten to death. Their corpses were publicly mutilated and violated. 26/33 https://t.co/a1AYrwMqnv 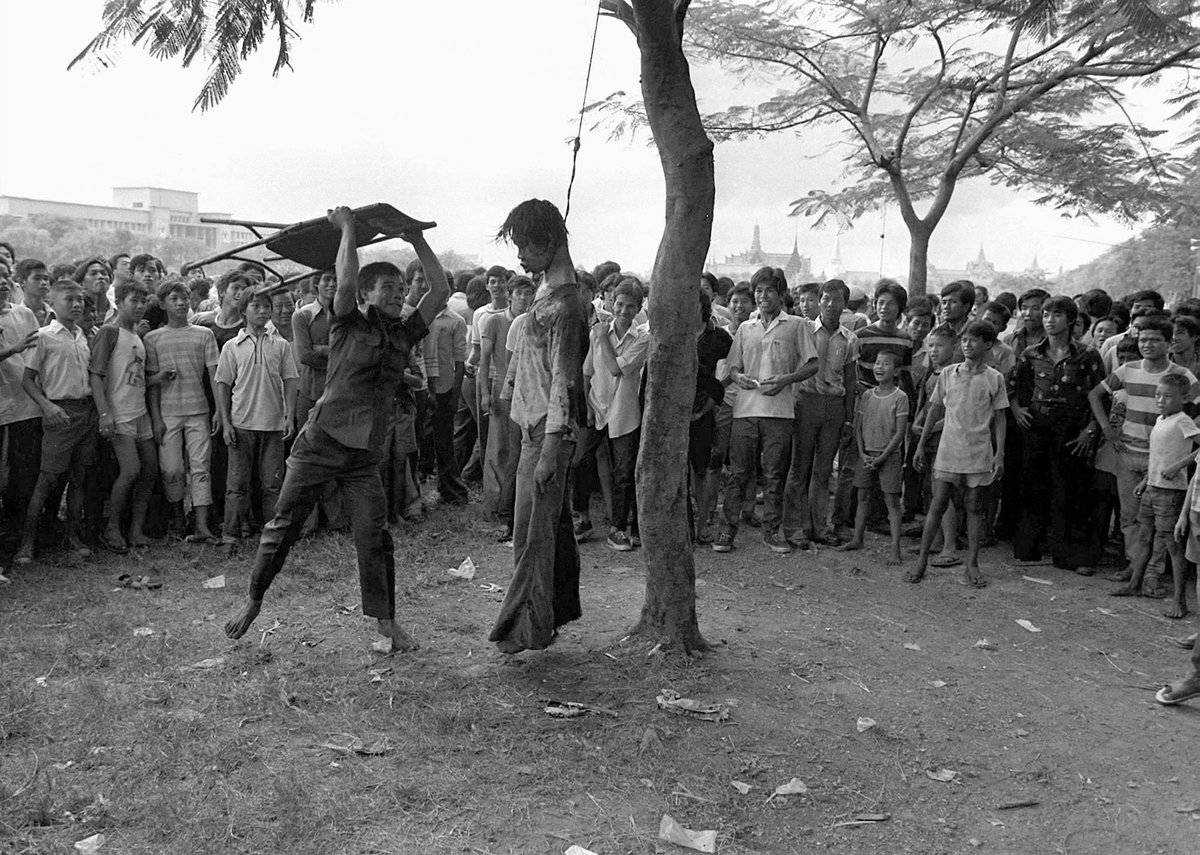 Thai activists have now gone far further with their demands than the protesters in 1976 even dreamed of, and in response the regime has sought to mobilise protests by far-right royalist groups. But unlike in the 1970s, these groups have no widespread support. 27/33

It's clear that the vast majority of Thais have no respect for Vajiralongkorn at all. Most Thais don't even bother standing up any more when the royal anthem is played in cinemas, another sign of how profoundly things have changed in the past few years. 29/33

If the regime tries to crush the calls for reform with violence, it will probably lead to the overthrow of the monarchy.

Even if the regime manages to hang on to power, its days are numbered. 30/33

One of the ironies of Vajiralongkorn's disastrous reign is that his attempt to reestablish royal absolutism is doomed to failure. He is 68 years old and when he dies, there is no successor who would be able to maintain the palace's grip on power. 31/33

This is a fight that the Thai monarchy and military will lose. The only questions are how long it takes for the palace and army to be reformed, and how many Thais will be killed as the regime fights to cling to power in a struggle it cannot win. 32/33

We can only hope sense prevails in the palace and military, to avoid more tragically unnecessary bloodshed. 33/33